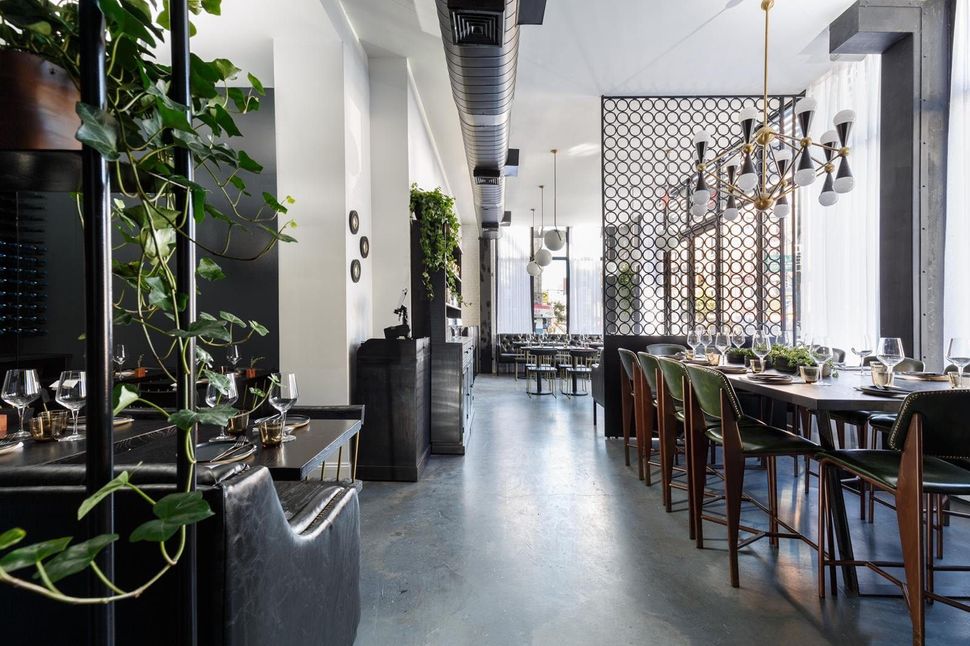 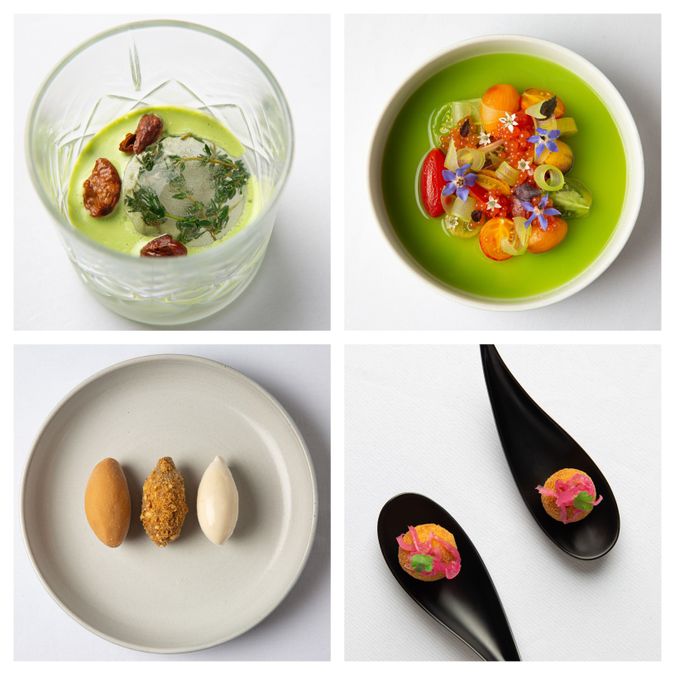 I do not know how to eat.

This is what I learned at a recent event, held by Crown Heights’ kosher Alenbi restaurant in honor of its second year since opening its doors. 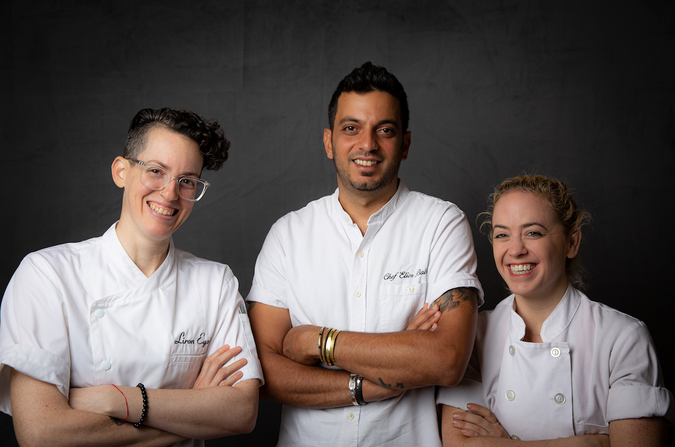 I do not know how to eat, I thought to myself as I savored a piece of tuna sashimi topped with nori “dust”, yuzu aioli, popped rice, and a spurt of horseradish foam. And I’ve been missing out.

Yes, luxury kosher dining is entering the realm of the modernist and molecular — foams and gels, air and soils. And here at Alenbi, it’s with a Middle Eastern twist. Here, it’s holy water and sacred ground. 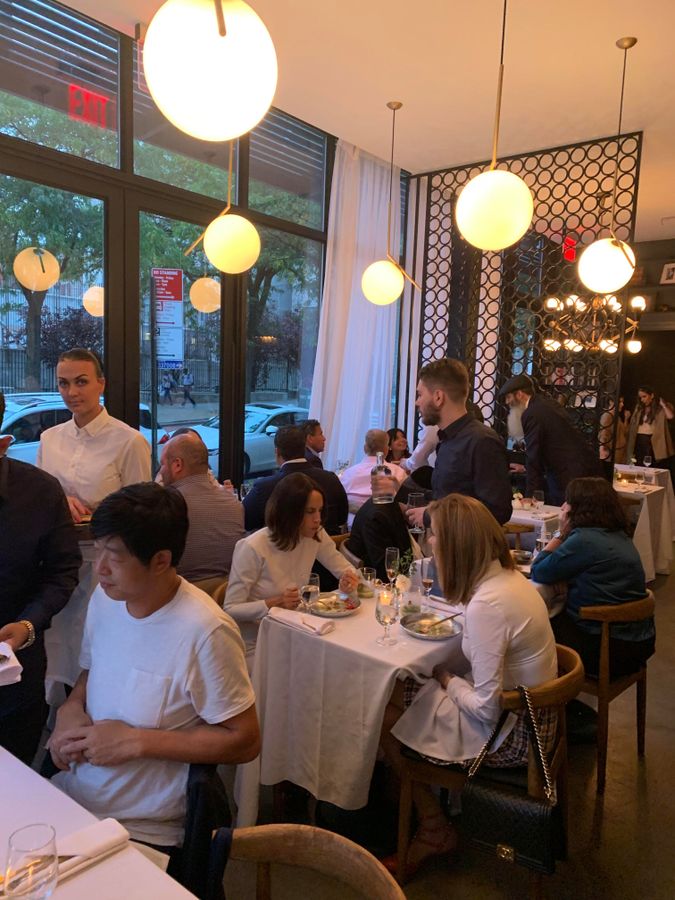 The scene at Alenbi Image by Yoav Davis for Davis Media

“We took Israeli street food and elevate it to fine dining,” Elior Balbul, the Israeli-born chef of Alenbi, told me. I could barely hear what he was saying — I was too focused on the flavors , and the sound of an oud wafting throughout the restaurant’s dim, industrial chic interior, lit by candles. The heady music might suit a scene in a film set in a sultan’s courtyard, but instead, the scene’s subjects are Orthodox men in yarmulkes and tailored suits, women in highlighted wigs and pleated skirts and bright lipstick: the kinds of people who can afford a dinner for $340 a person (and an additional $135 for wine pairings — once you’re there, you better get the wine), plus a few inevitable frum Instagram influencers.

A Lubavitch wine server walks over with a bottle of Champagne des Baron Rothschild Brut, and begins explaining something something in a soft Belgian accent, with small flourishes of the hands

Enter a “falafel deconstructed” — one of Alenbi’s signature dishes on their regular menu — tiny balls of fried chickpea, served alongside toasted Iraqi pita with dots of “Israeli salad crema” — that’s right, a cream made of blended Israeli salad.

Appetizers at the Alenbi Michelin experience. Image by Nitzan Keynan

The waiter brings an almond drink alongside it — a glass with an ice ball, herbs, and an almond-based liquid rozata. “This is the drink we drink on Shabbat dinner after the meal, with arak,” Balbul tells me. Balbul, who does not observe kashruth in his personal life, was previously executive chef under celebrity chef Meir Adoni, in his Tel Aviv restaurant Blue Sky.

Next is the “Bloody Cherry” — a mountain of heirloom tomatoes, swimming in mint cashew yogurt topped with “bloody Mary caviar.” I’ve never tasted produce this fresh in any kosher New York restaurant. For a moment, it really is as if I am sitting in a restaurant in a vineyard in the north of Israel.

A “scallop” made of sea bass is served next, on a “beurre blanc foam” — non-dairy, but ludicrously creamy — and then by a “palate cleanser” of pear salsa. This was then followed by veal sweetbreads served alongside cauliflower couscous, which was followed by seared duck with beets, which was, in turn, followed by a medium rare steak served on mushrooms with a runny quail egg.

Each dish arrives with a new wine, served by Mendel the sommelier, who describes each in a sing-song voice: “This is what I drink for arba kosos [Seder’s four cups of wine]!”

I stare into each moderately portioned, artfully designed dish, trying to decipher it. Good food should arouse curiosity — yet rarely do I ever experiment, both as a kosher diner with limited options, and with the demands of a hectic New York life. Who has time to rhapsodize over food? Amid the constant grind of feeding people that defines Jewish motherhood — usually, I just want nourishment that’s easy. What a privilege, I think as I play with the foam on my plate, to be able to contemplate food — to have the leisure time to pause from the grind, to think about an ingredient or an artful combination of flavors. It is, in the end, an exercise in mindfulness, in eating with purpose and consciousness.

And apparently, in New York, eating consciously is a luxury. I have to eat a $500 meal to sit down for a moment and savor it. Luxury dining isn’t just about a good cut of meat anymore — it’s about presentation, about small portion sizes, and about time.

For many Orthodox Jews, food is the heart of entertainment — in a community with not much of a vibrant arts life, with little theater or film or book launches — dining is the epicenter of “going out”.

“People flew in for this event,” one kosher food blogger told me at Alenbi, in between courses. “From Toronto, from Florida.”

In Alenbi, the mood is that of a wedding, people popping between tables, introducing themselves to total strangers.

Mendel the sommelier offers a chef’s kiss as he shows off the next wine — our seventh — a 2016 Cabernet Sauvignon by Flam Reserve. “I go crazy for it,” he says. “This wine mamesh causes me to to do teshuvah.”

A darbouka is playing in the background, and dessert is about to be served, and the seven glasses of wine are starting to make the industrial walls sway a little bit, and I wonder: My God, have we reached the zenith of privilege? Is this the peak of the golden for Jews in America, I think to myself melodramatically, sipping a Chateau Piada Sauternes, listening to two frum businessmen across the room having a wine-laced conversation about business class deals on flights to Tel Aviv.

But there’s no time to contemplate the Destiny of the Jews right now. Because dessert, three perfect packages of tahini-flavored sweetness, is on its way.