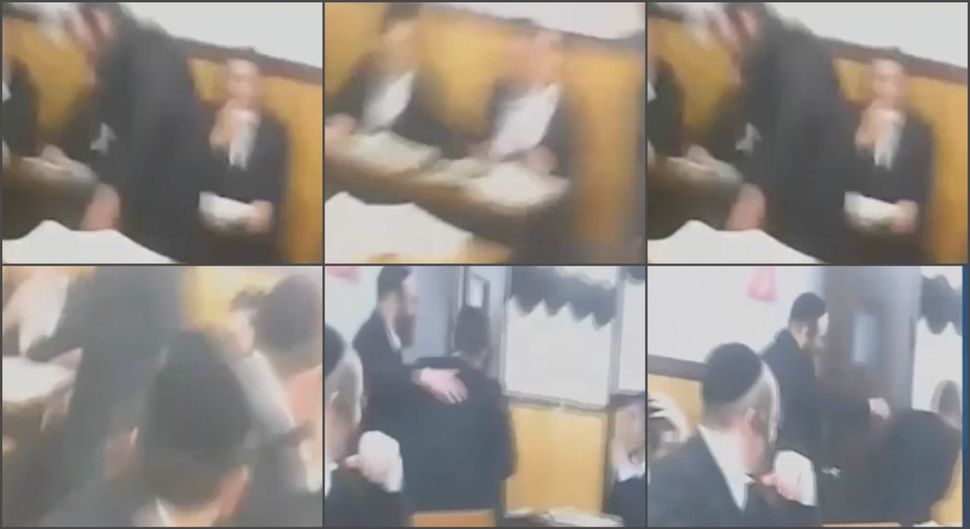 When I watched the video clip that surfaced this week of a Hasidic teenager lying on the floor and crying in pain from the blows of his rebbe, I was shaken, but not surprised. Sadly, this kind of sadism-disguised-as-discipline is all too common in Hasidic Yeshivas.

When I was in school in Williamsburg, our rebbe would punish kids by forcefully placing their little fingers at the metal desk, and closing the drawer on them, so that the kid would yell and scream as the metal tightened its grip on the soft flesh of the fingers, leaving dark purple marks.

Another rebbe let loose on a child. He kicked him forcefully in the gut and all over his body. He hit the child’s face multiple times until the skin was fractured. His marks lasted around two weeks.

Later, another rebbe hit a child with such brutality and force, his head cracked open and a stream of blood started flowing from beneath his yarmulke. The rebbe kept going. When he was done, he called Hatzalah to deal with the mess.

Such stories are far from uncommon, and I didn’t even witness the worst. From my friends I would often hear much worse stories. Children who got beaten so badly they required medical treatment. Rebbes who would dole out beatings as if in some third world country – 100 or 150 lashings with a belt for some minor misbehavior. And when the rebbe was in a particularly bad mood, he would use the metal buckle instead of the softer leather.

Even when we went to summer camp for eight weeks, the rebbes would join us and continue their attacks on children. I particularly remember the menahel (principal) of our camp, who would hit, kick, and punch children with such brutality that I died inside.

There has been a lot of discussion recently about the lack of secular education in the Hasidic school system. There has also been significant outrage about sex abuse scandals that take place in yeshivas, and yet physical abuse hardly gets talked about, but it’s real and it’s devastating.

Hasidic schoolteachers often resort to corporal punishment and while some rebbes would only hit a child once or twice, many of them would take it to the next level, using an innocent child for their sadistic needs.

The sins for which you would get punished would vary. It could be as ridiculous as not knowing the translation of an Aramaic word in the Talmud, or it could be that you talked in class without permission. The rebbe didn’t have to report back and there was little to no oversight as to how rebbes discipline their children.

Rebbes would often pick at the most vulnerable kids; children from broken or poor families whose parents would be either powerless or clueless in the face of abuse.

A common trope among rebbes was to tell the child after a beating: “Es tit mir mer vey!” (It hurts me even more). In retrospect I understand that those comments gave away the Rebbes’ guilt feelings. But like with any abuser, the guilt was turned into gas-lighting. The child was blamed for causing the Rebbe’s abuse and hurting the rebbe by that, no less.

It is my hope that the video that surfaced will serve as a stark reminder of the heinous violence that takes place in Hasidic institutions, and that this will lead to more scrutiny and more oversight on how we discipline our children.
Shlomo Weiss grew up in the Satmar community. He lives with his family in Brooklyn, NY.
The views and opinions expressed in this article are the author’s own and do not necessarily reflect those of the Forward.