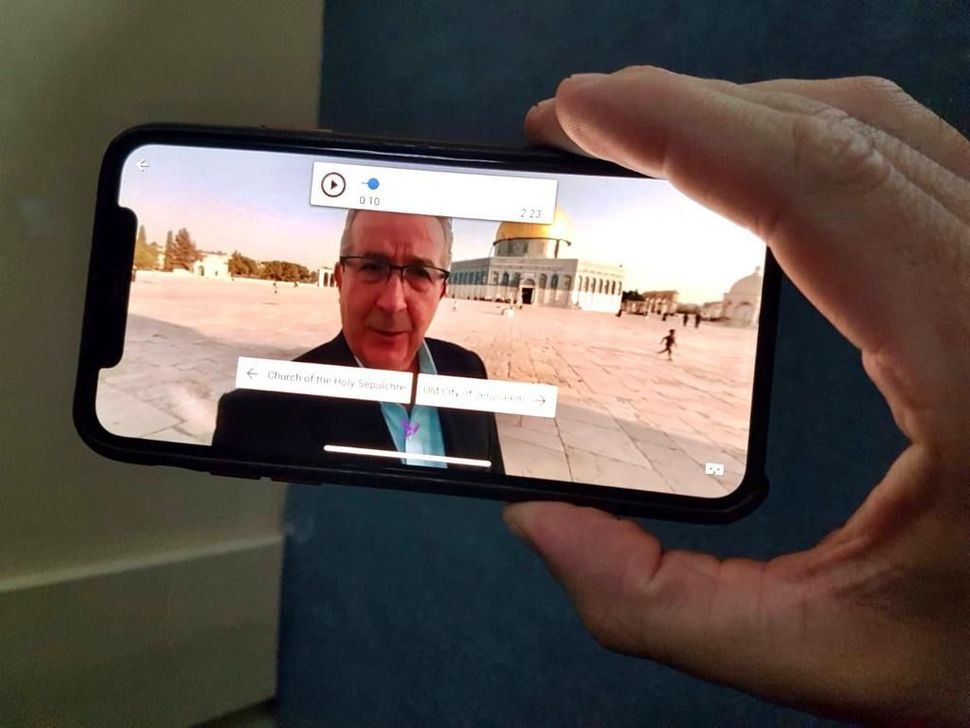 “Jerusalem has always the center and a focal point in Islam,” Palestinian anthropologist Ali Qleibo declared, striding across the Temple Mount.

“It’s one of the three holy cities…Jerusalem is about the connection between man and God. The base of Islam, the mystery of Islam is Jerusalem,” he continued, describing his family’s long history in the city and its self-appointed mission to “protect and preserve…the sanctity of the holiest place in Islam which is the holy rock.”

Qleibo’s comments came as part of a virtual reality tour he conducted for a new app called Palestine VR, intended, in the words of its develops, to “give users access to everyday life in Palestine and allow them to see highlights from the trip Israel banned U.S. Congresswomen Rashida Tlaib and Ilhan Omar from participating in.”

Introducing Palestine VR from The PIPD on Vimeo.

Many in the West Bank were incensed this August when the Israeli government barred Democratic Congresswomen Ilhan Omar and Rashida Tlaib from visiting the country over their support for the boycott, divestment and sanctions movement on the basis of a 2017 bill which entitles the state to deny entry to boycott activists.

Prime Minister Benjamin Netanyahu initially indicated that he would allow the trip to proceed but subsequently reversed himself following pressure from President Trump. While Tlaib was later granted entry on a humanitarian trip to visit her grandmother in the West Bank, she rejected the offer.

In broad strokes, their itinerary — titled “Delegation to Palestine” — would have taken Tlaib and Omar through major Palestinian population centers in Jerusalem and the West Bank, and to a string of meetings with Palestinian and left-wing Israeli nonprofits and activists, as well as international human rights groups.

“I was one of a few Palestinian youths that were supposed to meet the Congresswomen when they were here and we were extremely disappointed when they couldn’t make it,” explained 30-year old Salem Barahmeh, the executive director of the Palestine Institute for Public Diplomacy (PIPD), the Ramallah-based NGO that produced Palestine VR.

“The organization I lead does a lot of digital advocacy for Palestine so we thought how could we bring the tour to the congresswomen and the rest of the world,” Barahmeh told he Forward. “It seems that the people who come here are the ones most impacted and moved, and we wanted to give the chance for everybody to experience that because not everybody can come and visit. The idea is to reach people around the world.”

“We want to communicate with our counterparts around the world and introduce them to our reality,” he continued. “Our north star is progressive values. The values of freedom, justice, equality and rights for all. A lot of our campaigns are underpinned by those values.”

Using small two person teams, each equipped with a 360 degree camera, PIPD filmed short VR segments, some in conjunction with groups like Breaking the Silence and Birzeit University, in Jerusalem, Hebron, Gaza City, Ramallah and elsewhere.

“The app and the content came together in three weeks,” he added. “We worked quite a lot on it.”

Some of the clips in Jerusalem featured Daniel Seidemann, an Israeli attorney and the founder of Terrestrial Jerusalem, an Israeli NGO that “works to identify and track the full spectrum of developments in Jerusalem that could impact either the political process or permanent status options.”

Seidemann, who said that his involvement was marginal and that he could not comment on the final product because he has not had a chance to go through the app yet, explained that his aim was “to go out in the field in a limited geographical space in order to connect the dots, even for the uninitiated, to give them a grasp of the Israeli-Palestinian dimension of Jerusalem and the nature of the conflict in the city in its various dimensions.”

Such briefings are “very powerful” and that “no one walks away unaffected,” he continued, adding that he had been scheduled to take Omar and Tlaib around and that he had “ended up doing some of the things in the app that I had planned with them.”

Avner Gvaryahu, executive director of Breaking the Silence, expressed similar sentiments. “When Congresswomen Omar and Tlaib approached us, we obviously said we’d be happy to take them on a tour just like we’ve taken many other members of Congress on tours,” he told the Forward, cautioning that for all the immediacy of virtual reality “the app doesn’t come close to reality.”

“Once they were barred, when we were approached to take part in this VR project, we were excited to show them and whoever is interested what the reality is on the ground,” he said. “I think it says very bad things about the Israeli government that they are so scared of people seeing the reality.”

Despite the involvement of Israelis like Seidemann and Gvaryahu in the project, others have voiced complaints about the new app.

In a press release touting the app, Barahmeh wrote that it would show “how Israeli settlers are pushing Palestinians out of their homes in the Old City,” “how massive the separation wall surrounding Aida Refugee Camp in Bethlehem is” and “how violent attacks by Israeli settlers on Palestinians living in Hebron turned the business center into a ghost town.”

“It’s so absurd because the PA itself promotes Hebron as a great business hub and yet to the anti-Israel crowd they promote it as a ghost town,” complained Yishai Fleisher, the spokesman for the Jewish community in Hebron. “And this is an example of how this virtual reality app is nothing but a Potemkin village where they show you one thing [but] the reality is totally different.”

He went on, “The real idea behind this whole thing is to show how bad Israel is in order to paint it as an occupier, in order to evict Jews [from] here, in order to actually make ethnic cleansing of the Jews [and] there is nothing liberal about that agenda.”

Asked about Fleisher’s statement, Barahmeh replied that he would “not respond to such an incendiary comment.”

While neither Tlaib nor Omar has explicitly commented on the app, both have retweeted links to the Washington Post story about it.

Sam Sokol is a freelance journalist based in Israel. JTA contributed to this report.