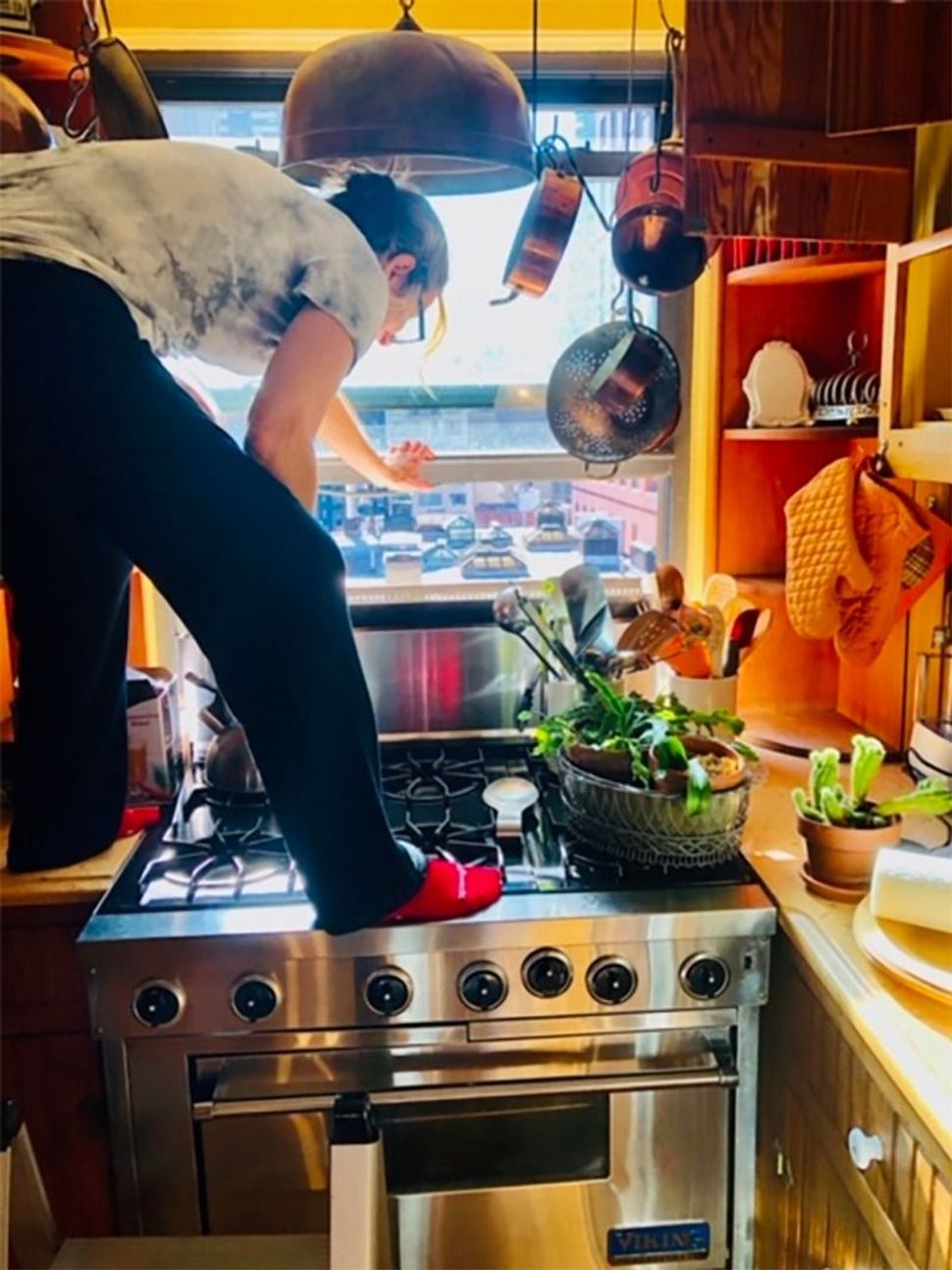 The artichoke plates were the breaking point.

When my mother saw that we had piled them in a section dubbed “GIVE AWAY,” she got very quiet. “Why would I give those up?” she asked, her face taut. “I use them whenever I cook artichokes.” 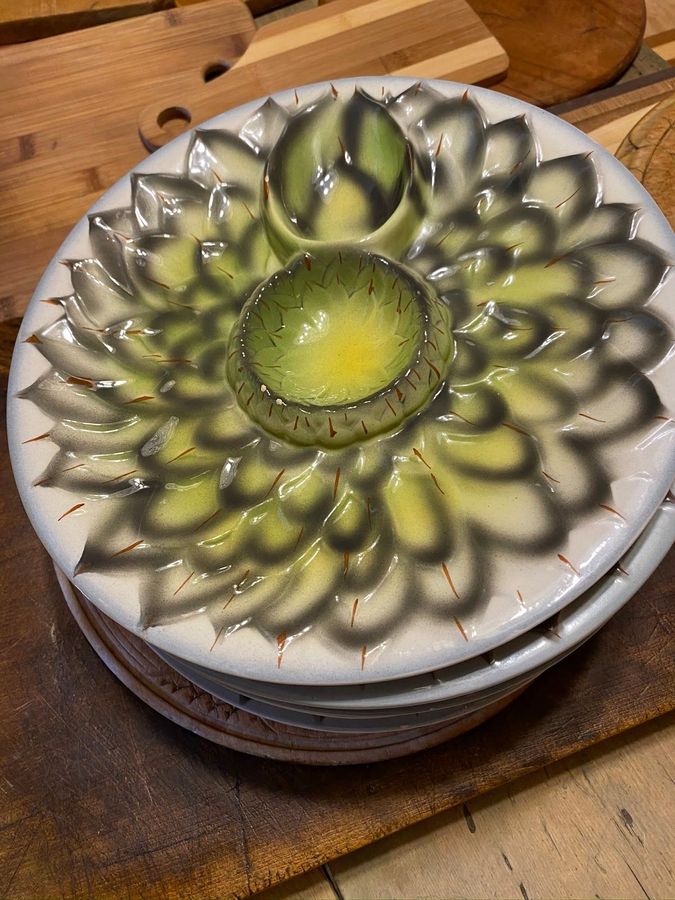 And how often is that? I wondered. Sixteen large artichoke plates take up a lot of space in an overcrowded kitchen cabinet. I had returned to my childhood home to address 50 years of accumulation in my parents’ pre-war Upper West Side three-bedroom. But things I viewed as dispensable, Mom and Dad saw as essential, resonant.

My parents both hit milestone birthdays this year — Mom (Letty) turned 80, Dad (Bert) 85, but aging hasn’t slowed them: Mom, a pioneering feminist who co-created Ms. Magazine and “Free to Be You and Me,” just sold her 12th book, and Dad, a labor lawyer for five decades, still goes to the office.

My mother, in particular, sees their stuff as happy proof of a long, storied life: her political button collection (“Bella Abzug for Mayor,” “I PRAYED AT THE WESTERN WALL”), an array of hotel hand lotions (soured soldiers on a shelf), 100 VHS tapes (though they’ve switched to Netflix), 40 glass vases from all those hostess gifts, and umpteen bottles of syrup and soy sauce, all of which are perilously close to their expiration dates.

Maybe I was spurred by reaching midlife myself. As I’ve watched friends’ parents falter, I am increasingly aware that this is an exercise better undertaken while Mom and Dad are still able to weigh in on which things matter most.

I chose a Sunday breakfast in my folks’ kitchen (ubiquitous lox) to float my idea for a closet-cleanse. Dad didn’t mince words: “No.”

Knowing he responds best to evidence, I made my case: “Dad, you can’t find your desk underneath all your legal briefs. Your office sofa is blocked by a bicycle with flat tires and ski boots from 1975. We are not going to throw things out without you vetting them.”

It helped that Mom had for years been urging him to tackle the anarchy.

“If my office is on the docket, then Letty’s has to be, too,” Dad said, ever the negotiator.

But after breakfast, she whispered an urgent caveat: “Jane can’t insist I give up my leopard cowboy boots.”

We calendared two full days, one week apart. Mom wanted to be home to guide us, but Dad would be safely across town at his law firm (no chance of success under his interrogatory eye).

A task that seemed overwhelming at first — sorting decades of collected business cards, paper clips and even his late aunt’s will — became efficient, even merry. Mom seemed relieved: she supported throwing out phone bills from 1989 and pens that had lost their ink. She agreed Dad would never wear those bulky red ski boots and should create a proper spot for his banjo, snorkel mask, squash racquet, and the Gregory Hines tap shoes won at an auction. 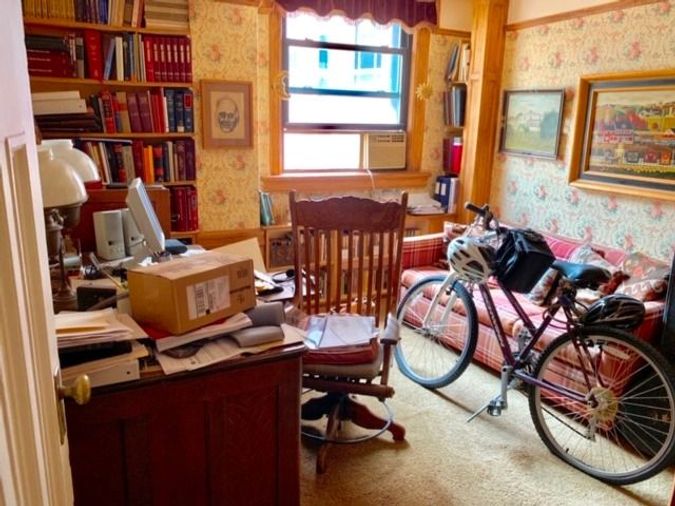 The office area before. Image by Abigail Pogrebin 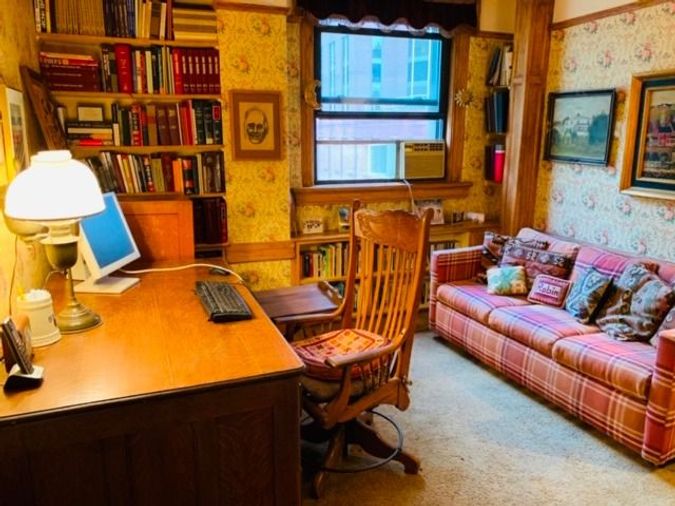 Office after. Image by Abigail Pogrebin

That night, Mom sent us a photo of Dad reading depositions at his newly-Zen desk. When I called the next morning, he conceded it was “very nice— thank you,” but culling his neckties — that was Mom’s idea — had been a bridge too far.

Our second session began with a piqued call from Mom while I was making my morning coffee.

“I’m not ready for you!” she exclaimed. “I need to organize before you organize.”

I convinced her to let us start on the kitchen by making piles, so that when she returned from a morning talk at the Jewish Community Center, she could make quick decisions about what to throw out, move, or put back.

By the time she walked in, I was in my own state of panic. It had begun to dawn on me, as we excavated every last cumin bottle and whisk, that we were challenging not just a Jewish mother’s system, but her core.

Mom has always had a serious public fan base, whose devotion I didn’t fathom until I started giving book talks myself — to Jewish communities from Detroit to Omaha. Literally hundreds of women come up to me like so many distant aunts and cousins— wanting me to know how Mom’s writing and speeches affected them.

But this revolutionary is also a traditionalist, a sentimental ballaboosta — passionate in her belief in how a latke should be crisped and how a Kol Nidre table should be set.

As we surveyed the cupboards, Jane whispered: “We have a ramekin situation.” 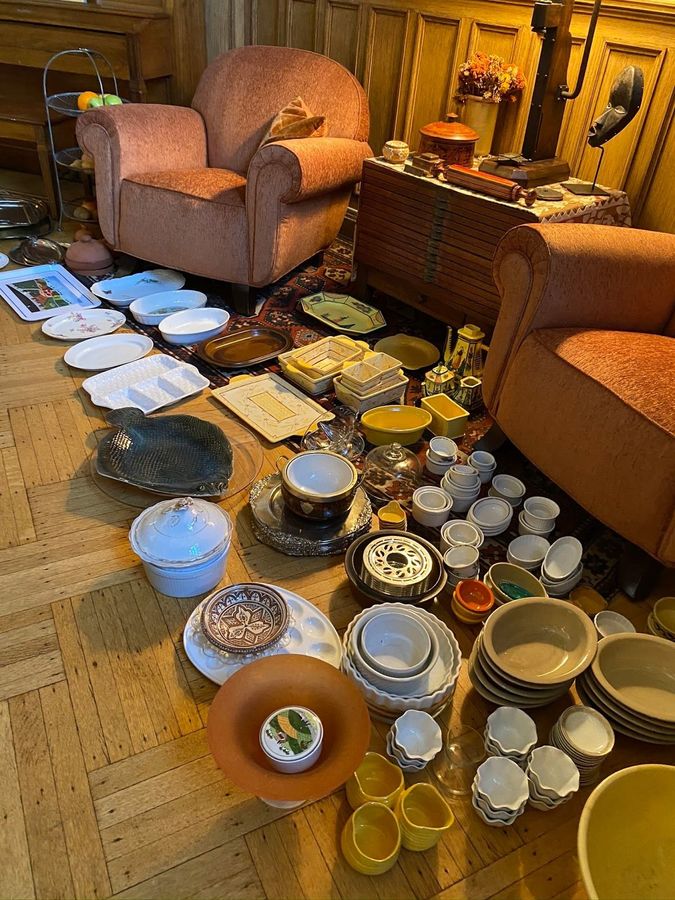 That was an understatement; there were maybe 50 of the tiny baking dishes. Jane and I agreed the best case for cutting back would be to lay out all the ramekins on the living room floor. Surely Mom would see she did not need so many.

We also put out every tray, cutting board, bowl and basket. We had a section for vinegars, vases and gravy boats. The living room looked like a tag sale on steroids.

And then Mom returned.

Her face said it all. Why is my kitchen in my living room? How dare you question my ramekins?

Every pot, she asserted, had a purpose. Creamed corn doesn’t go bad. The cactus could be saved, even though it had sat on the kitchen windowsill since the birth of her sixth grandchild 18 years ago.

“I use these ramekins,” she asserted.

“Okay, it’s just worth asking if you need this many, no?”

“I use them for individual salt water bowls for seder.”

“You don’t host seders anymore; you passed that onto me.”

The ramekins stayed. I put back every one. And as I made this walk of shame, from the living room to the kitchen and back, so much became clear: Clutter is history. Platters are memory. Ramekins are possibility — I may make that chocolate mousse again.

Particularly for my mother, who’s own died she was 15. My grandfather gave away all of his wife’s belongings without Mom even getting to see them one last time. Born in 1939, Mom also grew up with the wrenching photos of families chased from their homes during the Holocaust, clutching candlesticks and leaving their histories behind. She’s a saver because her own archives were erased..

Jane did not blanch in the face of Mom’s resistance, nodding along while Mom explained how she still used this mandoline or that chafing dish. Bit by bit, we each came half-way: Mom started to see how selectivity begat a new serenity, and I saw how some things should just be saved, even if never used again.

The truth is, I got nostalgic when I saw those artichoke plates. Simultaneously whimsical and hideous, they have green ceramic sunbursts of leaves encircling a shallow well for hollandaise sauce. I remember sitting around the dinner table in grade school with my siblings, interrupting each other as we recounted our melodramas, dipping each fibrous leaf into the creamy gold.

The next morning, I woke up to an apologetic email from Mom.

“It’s obvious how hard it was for me to give up things that contain memories, even if the things are chipped or old or unfashionable,” she wrote “But now that I’ve surveyed my refreshed little kingdom, I realize how much lighter I feel.”

I wrote back with gratitude for “pushing past your understandable roadblocks, Mama. It was joyful in the end.”

Jane chimed in: “Just don’t buy any sugar or salt for A WHILE.”

Abigail Pogrebin is a journalist, author and public speaker. Her book immersing in holiday observances, “My Jewish Year,” was a finalist for a 2018 National Jewish Book Award.