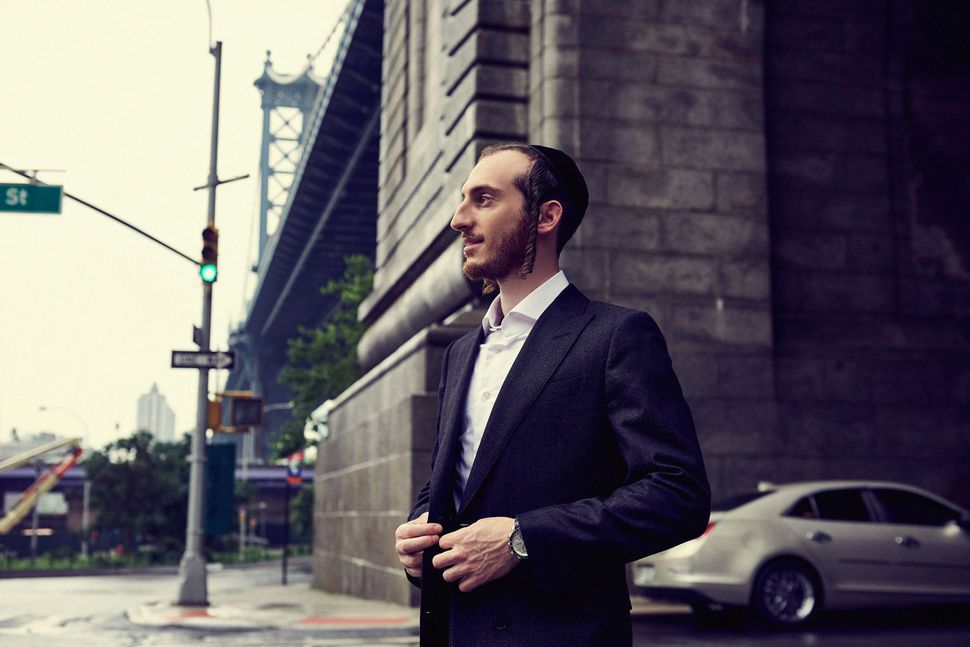 The biggest sensation in the Hasidic music world has asked me to meet him at a Lakewood strip mall. The sleek cafe where we chat is aspirationally Italian, glatt Kosher, and almost empty, but the eyes of passerby linger on our table, and one man slips out an Airpod to commend my interviewee for performing at a recent retreat for sick children. After graciously thanking his fan, this very polite pop star confesses that he chose the early hour for its relative anonymity. “Later on, it would be…” he shakes his head.

With the November 15 release of his album “The Perfect Dream,” with Decca Gold, Shulem Lemmer — known in his professional life simply as “Shulem” — became the first Hasidic singer to record an album with a major record label. He’s one of a handful of artists to gain recognition in religious and secular spheres, and he’s made his ability to navigate many worlds a central part of his brand. Composed and unflappably optimistic, he presents himself not just as a new singer but a new paradigm for Hasidic life: one in which young religious people can “chase our dreams and not compromise who we are.”

But before he was a household name in the Orthodox world, Shulem was the youngest of a Brooklyn Belz Hasidic household steeped in music. From his father, he inherited a love of traditional cantorial music, while his mother exposed him to more contemporary Hasidic tunes. An older brother, studying to be a cantor, introduced him to opera, which became a lasting passion, and his older sister Tzippy coached him through his first attempts to sing the songs they all loved.

It was Tzippy who propelled her ten-year-old brother towards the stage — literally — for the first time, planting him in front of a microphone at a cousin’s wedding. Shulem was hesitant to start singing. But as the dancing slowed and the guests gathered around him, he relaxed.

Tzippy was killed in a car crash just a few years later without ever seeing her brother sing professionally. But he credits her with showing him what he could do. “I had a strong connection to her,” Shulem said. “She taught me songs; she made sure I knew the lyrics.”

The next years saw Shulem entertaining crowds at family events, attending yeshiva in Israel, and finally returning to Brooklyn to get married and start working at a marketing firm. Wherever he was, he found a choir. His skill as a soloist made him a known quantity in the Hasidic world and a staple at fundraisers, b’nei mitzvah, and weddings.

And then — like any good marketing guy — he got online.

Drawing on his connections in the marketing world, Shulem found friends to help him record music videos of his solos, uploading his first, a rendition of the folk song Avinu Malkeinu, to Youtube in 2016. The feedback was “incredible,” Shulem said, pouring in not just from Jews but people of many faiths.

“It was an awakening moment,” he said. “I realized we have such power to reach out to people through music.”

Shulem’s ability to capitalize on social media allowed his music to spill out of the Hasidic world, eventually reaching the ears of machers at Decca Gold, a sub-label of Universal, who approached him last year about a record deal.

For Shulem, it was a dream come true — almost. “You always strive to be the best in your space, and becoming a successful singer is getting a record deal,” he said. But he didn’t see how he could perform in the secular world while adhering to the restrictions of Hasidic life. At this first meeting with Decca executive Graham Parker, Shulem listed some of the things he wouldn’t be able to do, from singing on Shabbat to recording love songs.

And, he said, he would have to consult not one but several rabbis whenever uncertainty arose.

To his surprise, Parker seemed unfazed, and “The Perfect Dream” started to become a reality. Most of the album’s tracks are covers, from classics like “Avinu Malkeinu” and “Chad Gadya” to secular tunes like “God Bless America” and “Les Miserables: ballad “Bring Him Home.” Shulem collaborated with producers on two original tracks, the titular “The Perfect Dream” and “Face the Unknown,” an earnest anthem of unity and coexistence. He vetted the content of each song to ensure it aligned with his values, and a clause in his contract allows him to turn down performances with which he’s uncomfortable. 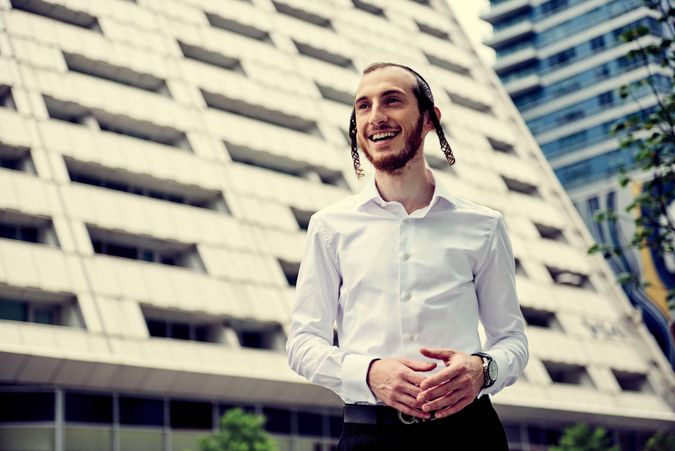 With the release of “The Perfect Dream,” Shulem has become the first Hasidic person to record an album with a major label. Image by Meredith Truax

“Many big opportunities have come up and I’ve said no,” Shulem says. Once, he tells me, the makers of Holocaust movie “Quezon’s Game” asked him to record a theme song with the film’s lead actress. However, like many Hasidic Jews, Shulem abides by halakhic laws about modesty that prohibit him from singing with a woman. He initially declined the offer, but the filmmakers eventually decided to record two separate versions of the theme song.

Inviting communal input at moments like this has allowed Shulem to step into the secular world without facing backlash. Instead, he says, those around him have kvelled at his career shift, telling him to “make us proud.”

For him, the weightier task is that of representing Hasidim to the wider world. Once performing only in the Jewish sphere, now Shulem often looks out on almost entirely non-Jewish audiences. He’s rocked out at New York bars, performed at Jewish heritage festivals in Poland, and sung the national anthem at packed sports stadiums all over the country. While experiences of anti-Semitism are rare, people express surprise and curiosity that the person behind the melodies is a visibly religious Jew. “Do you come to games often?” is a frequent question at sporting events.

“I see it as every opportunity, to educate them that we’re just like everyone else,” Shulem says. In his eyes, fame has conferred upon him the obligations of an ambassador. His job is to “give them a reason not to hate.”

It’s a responsibility he likes to shed at home, where his own children know little about his career. Still, “they like to listen to Tati’s music,” he admits. “They can go to the Google Home and say, ‘OK Google, play Shulem.’”

Irene Katz Connelly is an intern for the Forward. You can contact her at [email protected]