The Power Of Grating Potatoes This Hanukkah 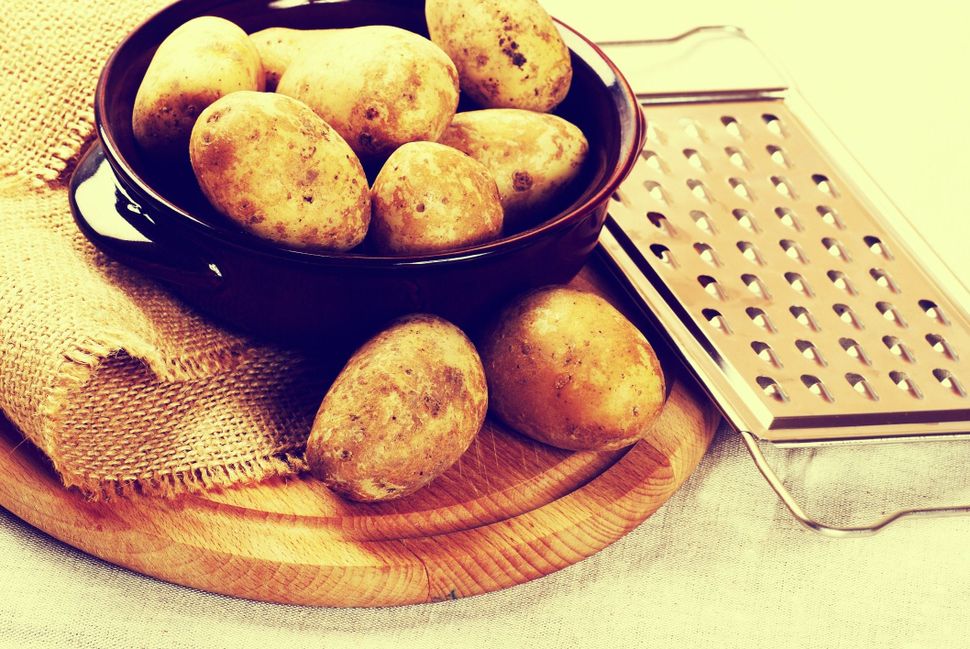 Potatoes and grater Image by iStock

There it stood on my quartz countertop. I wanted to put it away tucked neatly away in a drawer, or push it towards the back of my cabinet in the land of occasionally used cooking appliances — but I couldn’t.

I liked to look at it while I did the dishes. It had lost much of its sheen and had lived a hearty life grating potatoes for crispy latkes, onions for homemade gefilte fish with an odd-named fish called carp plus slightly bruised McIntosh apples from the bargain fruit bins for charoset.

The woman who owned the four-sided grater was my maternal grandma Anna. A Holocaust survivor who spent much of her days in retirement from a job in New York’s garment district in a small 200-square foot kitchen. She worked as a finisher; sewing buttons and zippers on clothing before the Made in China days was her specialty. I imagine her fine motor skills were above average and sometimes I was fortunate enough to see her deftly sew a hem on a pair of my too long dungarees as she called them.

Grandma Anna’s kitchen played a central role in my life and was the focal point of her home. She had a hexagon shaped wooden table and pleather chairs when we used to call it vinyl. This was the table that I’d sit at while she spoke in Yiddish to my mom and I tried to decipher what they were saying. Above the kitchen table was a framed needlepoint that she made, featuring a woman lighting Shabbat candles. This was the table that we made sugar cookies shaped like little gingerbread men on. One side of the grater was used to make orange zest to put in the batter. We’d sprinkle them with confectioner’s sugar, and I imagined that this ingredient was only used in the finest of bakeries.

Grandma’s kitchen was always warm. No matter what time of year it was. In the winter, she’d serve me Droste’s hot chocolate — none of the Swiss Miss Americanized junk — and butter cookies that came in a tin from Denmark.

In the corner of the kitchen was my grandma’s make-up vanity. As I look back, it was an odd location for this piece of furniture. Her bedroom had ample space for it, but instead it was squeezed into a tiny corner. I used to love opening the drawer seeing the shades of pink lipstick and glittery pale blue eyeshadows. If I were lucky, she’d let me apply lipstick and rouge. Pale cheeks were an affront to her and indicated ill health.

Only now as I spend the great majority of time in my own kitchen do I understand why she had the vanity located there. Beauty and nourishment were intertwined for her, and a gift for those who were lucky enough to survive the ravages of war. To make oneself look beautiful, whether adorned in the latest fashions (she never wore pants!) or skillfully play up your cheekbones, was part of becoming American and perhaps a way to minimize the ugly past. To feed your family with ample food and recipes from her childhood was a nod to her European background but also represented freedom and the bounty that America offered.

My grandma never learned to drive; her supermarket and green grocer were only a block away. As she beautified herself in front of the vanity for grocery shopping, she felt it was important to look a certain way even if we were only doing the mundane task of picking out oranges or getting the best cut of brisket at Key Food.

After my grandmother passed away, my mother asked me what I wanted to take as mementos from my grandmother’s home. Newlywed, I was living in a small Manhattan apartment and didn’t have room for many keepsakes. I took a pushpin which still held many needles that I could vividly picture my grandma putting in her mouth as we shortened my dungarees. I asked for the vanity and its accompanying bench to be stored in my parent’s garage until I had more space — maybe a house in the suburbs in the not too distance future.

But this year, when I was tasked with making latkes this year for my youngest daughter’s class, I realized I had no grater.

Yes I had a microplaner to zest lemons or ginger — but no kitchen tools that could do this formidable task. I asked my mom if she had a grater and sure enough she had kept my grandmother’s grater.

She pulled it off her kitchen shelf and gave it to me.

And that’s how it came to be on my kitchen countertop, standing at attention.

As my daughter and I grated potatoes together, I could feel my grandmother guiding us. As she was never one to use a recipe book, I made sure that we squeezed any excess moisture out of the Yukon golds just as she had instructed me to. We fried up the mixture in our warm kitchen and I thought about how one day I would pass the grater down to her along with the recipe – all drenched with love.

Stacey Pfeffer is a writer/editor living in Northern Westchester with her three kids and rescue dog plus a menagerie of ducks, deer and chipmunks in her backyard. When she isn’t meeting deadlines, she can be found running with her dog or trying to concoct somewhat edible meals for her family.

The Power Of Grating Potatoes This Hanukkah