For A Long Time, I Felt Unsafe Wearing A Kippah. Now, I Feel I Must. 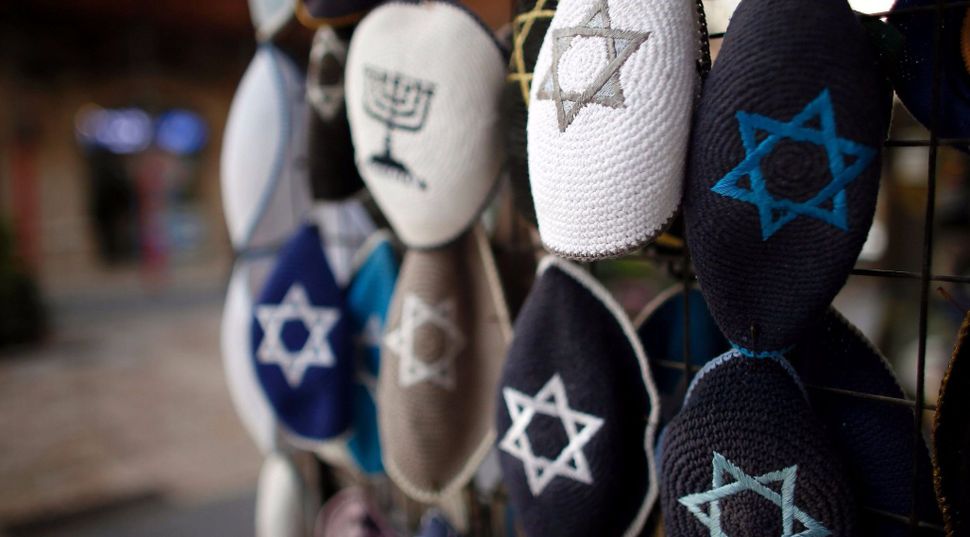 I am sitting at my brother’s dining room table in suburban New Jersey wearing a pale grey-blue driving cap. It’s the one I use to keep my head warm and also to hide the yarmulke underneath. A curious extended family relative breaks the silence: “Do you always wear that hat?”

As an assimilated and secular Jew from Manhattan, raised on lox and bagels and Yiddish folk tales, I did not grow up wearing a yarmulke. After my adult bar mitzvah less than two years ago, I noticed my heart opening and a smile forming on my lips whenever someone wearing the signature headgear of my people passed me on the street. So I began wearing a skullcap at home and covering it up with another hat in public.

I was scared. Afraid about how being seen more openly in my Jewishness would affect others and what it could mean for me. The surprised look on the face of a colleague who was used to my earlier bareheaded presence, emerges when I appear at a seminar in the purple suede kippah I had been hiding under a baseball cap for months. “I didn’t know you were religious!” she exclaimed across the room. I looked down embarrassed, blurting out that, “I wasn’t raised that way.”

Still, I was getting restless to be more real about my growing Jewish identity. I had observed a musician I admire, wearing a driver’s cap as he played at the Romemu Manhattan congregation where I am an online regular for live-stream Shabbat services. So when my wife and I were in New Orleans last spring, I ducked into MEYER The Hatter’s store on St. Charles Street and picked up my very own driver’s cap with the words “Stetson Since 1865” emblazoned on the back. This became my kippah-cover-up of choice for months.

A few months later, at a New York City airport, as I boarded an Ethiopian Airlines flight that would take me to visit with Jewish children in Ethiopia waiting to join their families in Israel, I was wearing my yarmulke-under-driving cap assemblage. While I ate the pre-ordered kosher meals on the long flight, I kept my kippah well under cover after I boarded. Only when I arrived in the Addis Ababa hotel housing Israeli volunteers, did I feel comfortable enough to remove the cap and let the kippah be seen.

Back in the States, after travel to Ethiopia and Israel, I read the news about a 64-year old rabbi hit in the head with a brick as he took his daily morning walk through Crown Heights in Brooklyn.

As I walk past the Jewish Community Center in Manhattan on the Upper West Side, I see the steel bollards out in front to prevent car ramming attacks. So I reach for the illusory protection of my driving cap to safeguard what my Polish grandmother called “mein shayna kup” – my precious head. But then I remember what is still in my bag from Ethiopia — a stack of hand-knit kippot made by the woman who manages the mikveh in Gondar, Ethiopia. I remember the young boys praying with fervor on the hardened dirt floor of the synagogue there, how each would wind his tefillin straps with such concentration and devotion. I know they could be at very real risk, wearing a kippah in the streets of a land they intend to leave for the promised land of Zion.

And it is then that I grow tired of my routine, my covering up and hiding. How can I continue to conceal, while these Ethiopian Jewish boys proudly show their identity, even in the face of insults and discrimination?

So it is time to take off my “safe hat” in more spaces. Time to more openly declare a connection to the glorious energy that crowns this universe, after many years of uneasy assimilation. I am proud of the long lineage of my people who at many times and places, perilous or not, displayed their faith on their heads. Even if a shock to my friends and family, clients and colleagues, I need to shed the fear I have worn and take the risk to reveal that for which I stand and show before whom I stand humble – the Holy One, who animates my life.

Even as the pain of Monsey, Jersey City, and Pittsburgh gives me pause, being “visibly Jewish” shines growing light on a path well chosen.

Neal H. Brodsky is a family therapist licensed in New York and Connecticut. He is a contributor to the forthcoming International Handbook of Play Therapy and one of 12 therapists around the world to contribute a chapter to the book “Deep Play: Exploring Depth in Psychotherapy With Children.” Trained in Marriage & Family Therapy at Fairfield University, he also holds a Master’s Degree in public administration from what is now the Wagner School of Public Service at New York University. Living in suburban Connecticut, he practices both there and in Manhattan. Advocating for Jews of Ethiopian descent, Brodsky’s blog can be found on Times of Israel.

For A Long Time, I Felt Unsafe Wearing A Kippah. Now, I Feel I Must.