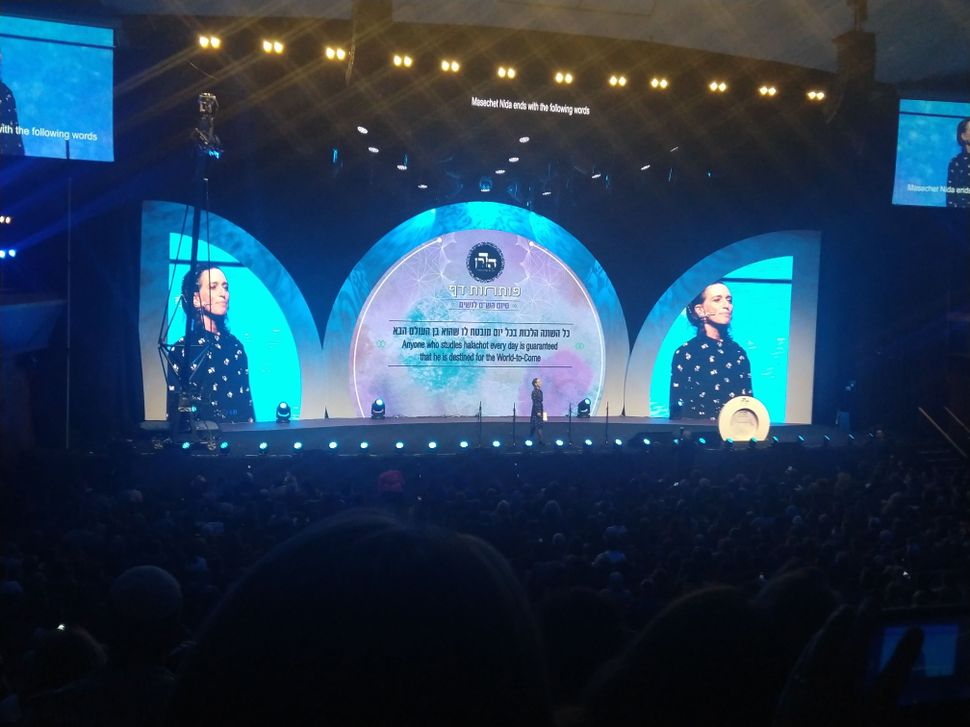 “Come in”: There’s Room Now for Women Too in Talmud Learning Ilana Blumberg

On a cold night in Jerusalem, more than 3300 women and men gathered for the first public celebration of women’s Siyum HaShas. The seven-and-a-half-year global cycle of daily Talmud learning came to its close for the thirteenth time since the practice began nearly a hundred years ago, founded by Rabbi Meir Shapiro. While celebrations are held worldwide, and last week saw the MetLife Stadium filled with more than 90,000 Jews, the celebration in Jerusalem held by Hadran, an Israel-based organization devoted to fostering women’s Talmud study around the world, was the first of its kind in Jewish history.

With one exception, all its speakers were women, and nearly the entire audience was female, from young girls accompanying their mothers to teenage high school students, soldiers, midrasha students, middle-aged and older women, all marking the revolution in Jewish women’s Torah study and in particular, Talmud study, that has taken place in the past three to four decades.

“When I was in junior high, I learned Gemara,” said Yoheved Novogroder Shoshan, a fifty-year-old resident of Efrat, originally from New York. “But my high school didn’t teach girls Talmud and I didn’t learn it when I studied in Israel. But I came tonight because this is a historic moment, a public recognition of women who have finished Shas. I wanted to support it.”

A long line of mostly modern Orthodox women stood waiting to enter Binyanei Hauma, chatting in English and in Hebrew. The mood was joyous.

Jenny Brenner Zivotofsky, a rabbinical court advocate, confessed that she had hesitated before signing up to attend. “Siyum hashas is for people who finish the Shas and I didn’t finish it. But I decided to come because it’s a way of showing support for women’s learning and for women who did finish Shas. I wanted to be part of a really momentous occasion, to be part of the history of women’s learning.” 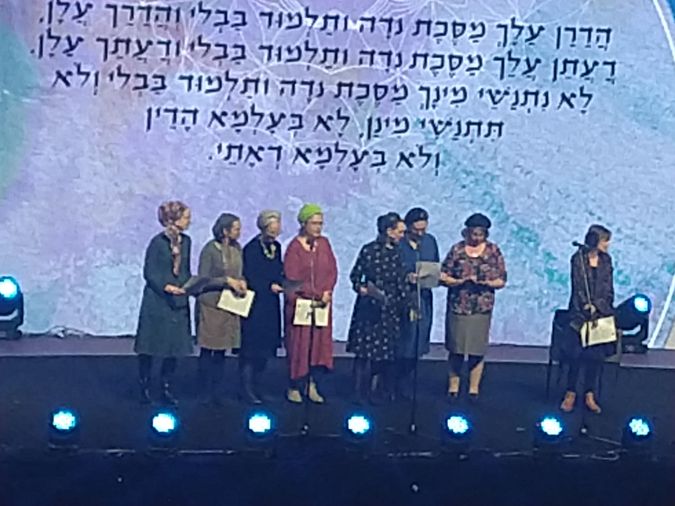 As one after another female scholar got up on stage, the audience spontaneously rose to its feet, honoring the Torah they embodied. Each woman who spoke was introduced as “Rabbanit,” a term that for generations served as an honorific for the wife of a rabbi, but “means something new and totally obvious” today, as a woman in the crowd pointed out to me: “Rabbanit is a female scholar of the highest order, a teacher of Torah in her own right. Who she’s married to is not the story.”

From the emcee Rabbanit Racheli Sprecher Frankel (known to many as the mother of the teenager Naftali who was kidnapped and murdered by terrorists in 2014) who serves as the director of the Advanced Halakha Program at the Matan Institute, one of the first institutions to teach women Talmud, to Rabbanit Esti Rosenberg, head of the Migdal Oz seminary and daughter of the renowned Rav Aharon Lichtenstein and granddaughter of the Modern Orthodox luminary Rav Soloveitchik, to Rabbanit Malka Bina, founder of Matan, to women who are lesser known outside of Israel but have, as one teenager noted, “rock-star status” in Israeli learning circles.

Rabbanit Michelle Cohen Farber of Hadran was by all counts the spirit behind the evening. Originally from New Jersey, now a resident of Raanana with her husband, Rabbi Seth Farber, and a mother of five, Farber taught every single page of the 2711 folio pages of the Talmud to a small class at her home, but more importantly, recorded these classes as podcasts in Hebrew and in English, enabling women around the world to follow her explanations as a guide. Reciting the ancient words of summation, “hadran alach,” we will return to you,” she expressed the hope that in seven and a half years we might all meet again — “in a much bigger hall!”

Toba Goldberg, an American tourist in Israel, marveled at having known Farber as a girl — Goldberg’s daughter had studied with her in the Yeshiva of Flatbush. “My own experience with Talmud as a girl was not a good one,” Goldberg reflected. “As a matter of fact, I voted against studying it in high school.” While Goldberg attends other classes in Jewish text regularly, she has steered clear of Talmud. But now, she may give it another chance. “My husband has a hevruta (study partner for Talmud), and my daughter, too. For this siyum, I signed up to learn one daf (page). I sat down and learned it with my husband. I went to a shiur in Gemara, and it was inspiring.”

Throughout the evening, the main message was that it was not too late for any woman to get started — and that starting small leads to great things.

In an evening as revolutionary as this one, it was notable that the terms “equality,” “feminism,” and “gender” were not mentioned by a single woman. While the leading Talmud scholar Rabbanit Dr. Michal Tikochinsky joked at one point, “I’ve heard there are also men who study Torah,” the theme of the evening was not social progress but the deepening and widening of the reach of Torah. As Rosenberg put it, “When my father and grandfather opened up Torah to women, I don’t think it was so much because of what they thought about women, but about what they thought about Torah. They couldn’t imagine life without it.”

Deep gratitude was expressed to Sarah Schnierer, the founder of the Bais Yaakov girls’ schools a century ago; also to male luminaries who opened the pages of Torah and especially Talmud, to women; and to the rabbis, publishers, and patrons who have made the Talmud more and more accessible in recent generations, so that it is no longer the province of the elite; and in a nice flip from the norms, thanks were offered to husbands, fathers, and grandfathers who made their wives’ learning possible.

At the evening’s close, after the singing of the Israeli national anthem, I asked Rabbanit Devorah Evron, who was marking her completion of the Shas, what the evening had meant to her. Searching for words, she said, “A sense of elevation. Of gratitude to be a Jewish woman living in this generation.”

Rabbanit Dr. Tamar Meir, a teacher of Torah and a popular author of children’s books, put it this way in her post, “We have seen tonight, for the first time, a female learning public.” Until now, Meir worried that Jewish women’s learning was only an elite affair, on the fringe of modern Orthodox society. “Tonight it has come into the mainstream,” she wrote. “There are many of us. The path before us is still long. And yet there was something that said to each and every woman — you have a place. You have a stake in Torah. You have a large and powerful community standing behind you. You are not alone.”

Ilana Blumberg’s is the author of ‘Open Your Hand: Teaching as a Jew, Teaching as an American’ and ‘Houses of Study: A Jewish Woman Among Books.’ She is the Director of the Shaindy Rudoff Graduate Program in Creative Writing at Bar Ilan University.