When the tuition bills add up, some Orthodox consider aliyah 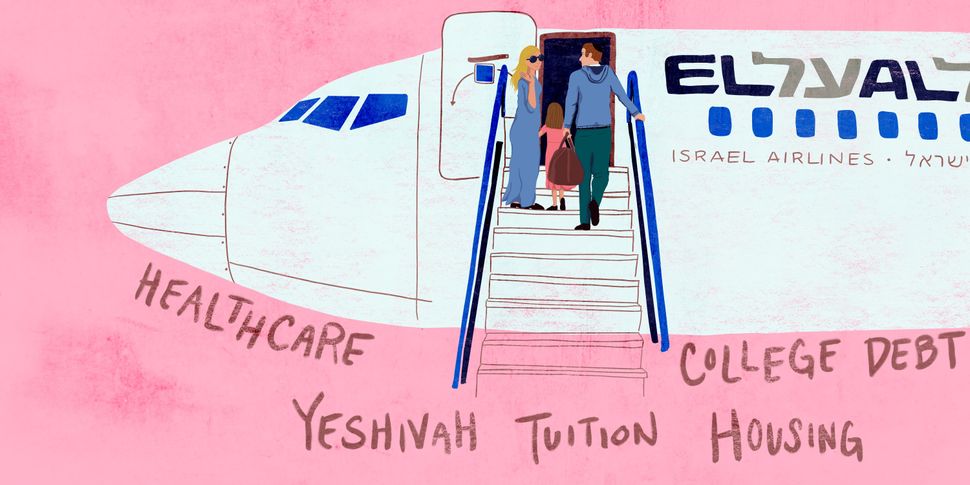 The numbers were not adding up for a New Jersey Orthodox couple in their early 30s with five children.

She is a lawyer, he works in tech — two well-paying jobs. They still qualified for income-based assistance from their local yeshiva, so tuition for the three school-age kids totaled $40,000. But they knew that if either of them got even a minor salary bump, they’d be in a difference bracket and lose the assistance, instantly tripling their annual household expenses.

“We’d have to make major life changes, we’d have to move into a tiny apartment,” the wife said in a recent interview. “We already don’t go on vacations. We really don’t live an extravagant lifestyle. We have good jobs, and we still are struggling to make ends meet.”

She spoke on the condition she not be named because the family has decided to make aliyah this summer and their employers do not yet know of the plan. “If we’re going to struggle to make ends meet, we’d rather do it there than here,” she said. And the math is much different, because in Israel, the children would enroll in the religious track of the public-school system — goodbye, tuition.

It is an increasingly common calculus among the millennial Orthodox. With day-school costs rising along with housing prices in neighborhoods within walking distance of many synagogues, plus a general social pressure to keep up with the Cohens, more and more families seem to be considering aliyah in part for financial reasons.

“We call them ‘tuition refugees’,” said Chana Shields Rosenfelder, who lives in Beit Shemesh, Israel, and is a consultant for students with special needs, for whose families aliyah can be especially attractive.

Some of the financial pressures are not unique to the religious lifestyle. Expensive healthcare and higher education, burgeoning student debt, and bleak retirement prospects are all factors several families cited in interviews. But for large Orthodox families, yeshiva tuition, kosher groceries — and the pressure to enter highly lucrative careers — are just too much.

“Modern Orthodoxy in America costs too much,” said a 44-year old mother in New York City who said she and her family have been considering a move to Israel for several years, and spoke on the condition of anonymity, for fear of professional consequences. “Wherever you want to live, with the better schools, costs money. There are very few out-of-town communities with decent schools. Plus extras, bar and bat mitzvahs, camps. So people are like: ‘Why not just struggle there?’”

According to Prizmah, a network of Jewish day schools across North America, 55% to 66% of families get tuition assistance now. “The pressure is on the middle-income families,” explained Dan Perla, who studies day school finances at Prizmah. “Twenty years ago, middle income never needed scholarship – but now they do, because tuition has been rising far quicker than wages.”

Some consider public school — a recent survey by NISHMA, a sociological research group that studies Jewish communities, found that 31% of parents with school-age children “might consider public school as an option”. With these trends in mind, Orthodox groups like the Orthodox Union and the “National Community Development” program of Lakewood’s Beth Medrash Govoha are trying to help families move out of urban areas, creating Orthodox-friendly neighborhoods in places like Austin, Texas and South Bend, Indiana.

But some families are looking further away, seeing a move to the Holy Land as a way to save money — and express their Zionism.

Not that a move to Israel doesn’t have financial downsides. The cost of living is notoriously high, and the median monthly salary there is equivalent to $3,112.55, versus a median monthly salary in the United States of $3,676). Still, several professionals interviewed said that aliyah made financial sense for them, given the costs of Orthodox American life and the stagnancy of U.S. wages.

David Avraham, a 34-year-old lawyer, moved to Jerusalem with his wife and three children in 2017; they have since had another baby. “The idea of paying for four kids, over $100,000 for day school tuition, when you can come here and pay about 2,000 shekel (roughly $600) a year per kid, as an administrative and activities fee — we couldn’t reconcile that and still can’t,” he said. Avraham reflected on the stresses that many parents who receive scholarship feel when sending their children to yeshiva day school in the States. While acknowledging that many schools have done an admirable job at implementing heightened privacy and confidentiality standards, he said that “there’s still a perception that someone may always be looking over your shoulder.”

“There is real discomfort in making certain financial decisions—like taking a family vacation—as those decisions may feel scrutinized through the prism of the family’s scholarship.” He added, “Overall, it’s just not a sustainable model.”

Several olim interviewed for this article repeatedly said that they had been “scraping by” in the U.S. and now, in Israel, felt more financial flexibility. As dual citizens, they remain simultaneously eligible for American child tax credits and taxpayer-funded Israeli health care.

“It’s much easier to set ourselves up here than it was to do it in the States,” said Benjamin Nadler, a tech-content writer and father of two, whose family moved to Modiin from Boca Raton, Fla., in 2017. “I think most people have something of a mixture of ideology and opportunity.”

Tova and Mordechai Horowitz also moved from Boca Raton, in 2013, rather than pay $30,000 in tuition for both of their twins. They moved to Maale Adumim, a West Bank settlement that is just outside of Jerusalem, and have both found work in hi-tech.

“It wasn’t about the ideological, but the practical,” she said. “It doesn’t make sense for everyone, but a lot of our calculations made it the right choice.”

Shimon Simpson, a 37-year old accountant, was perfectly happy living in Philadelphia and for years demurred at his wife’s desire to make aliyah. Until their son was diagnosed with autism. He got sticker shock when looking at special-education programs within the day-school world: “We were getting quotes for high school anywhere between $35,000-$50,000.”

They moved in 2016 to Ramat Beit Shemesh, about halfway between Jerusalem and Tel Aviv. Their autistic son enrolled in a public special-education Haredi school in Neve Yaakov and they’ve since had a fourth child. Now, their son attends a public Haredi high school in Ramot — costing them 250 NIS (roughly $72) annually.

“I definitely took a paycut coming from the U.S. to Israel,” he said. “But economically, overall things balance out, as long as you’re willing to work within the system. Obviously, nothing is free — it’s coming out of your paycheck every month. There’s a 17% sales tax on everything. So you rearrange priorities.”

Marc Rosenberg of Nefesh b’Nefesh, a group that assists people in making aliyah, said it’s not just the actual numbers but the sense of an American “rat race” that pushes a lot of Orthodox families to make the move.

“Day-school tuition is the symptom, not the problem,” he said. “One young man recently told me, ‘I don’t want to work as hard as my parents did, to live this lifestyle.”

Many believe Israel is simply more family-friendly and can offer a better work-life balance. Maternal paid leave of 14 weeks is guaranteed by Israel’s National Insurance Institute; it is relatively common for parents to leave the office at 3 or 4 p.m. to take care of children.

Several young olim said that they decided to have more children after they moved, since they no longer had to consider additional day-school tuition, which Orthodox Jews in American often joke is a form of birth control.

“You might not have made aliyah to have more children, but it happens like that,” Rosenfelder, the Beit Shemesh education consultant, said. “‘We can afford to have a third or fourth or fifth child, because we’re not paying so many tuitions.’”

Other olim are drawn to the prospects of pursuing unorthodox, creative careers — professions that could never pay the bills for a modern Orthodox family in the United States. “A community that constrains the career choices of its young people incurs a cost that cannot be measured only in dollars and cents,” Rabbi Elli Fischer wrote on American Modern Orthodoxy, in the pages of the Jewish Week in 2015, after making aliyah in 2006. “The pressure to produce high earners discourages and marginalizes those members of the community whose calling is in music, literature and the visual or performing arts.”

The New Jersey lawyer who is planning to make aliyah this summer said she was doing it to make life better for her children.

“It’s not like it was for our parents, who did better than our grandparents did. I’m not sure it’ll be better for my kids if I stayed here, financially,” she explained. “That reality is catching up with the community quickly, because we have this big ticket item of tuition on our list.”

She paused, then added: “Living in America isn’t the American dream that it used to be.”

When the tuition bills add up, some Orthodox consider aliyah