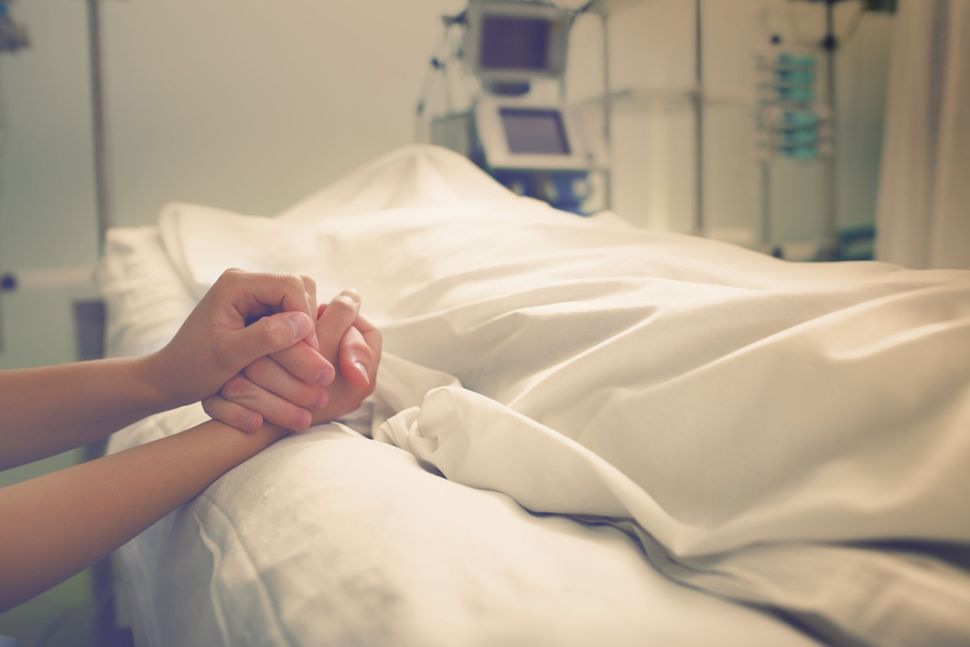 While survivors and world leaders commemorated the 75th anniversary of the liberation of Auschwitz last week, I attended a very small, very private ceremony.

As a member of a hevra kadisha, or burial circle, I helped prepare and dress an Auschwitz survivor, Suzy Rosenberg, for her burial in a small village by the Mediterranean Sea in Israel’s Western Galilee.

Suzy was the mother of my next-door neighbor, Yehuda. She died on the anniversary of her her husband Mordechai’s death, thirty years ago. The day they both died was also their wedding anniversary.

Suzy moved to Shavei Zion in 1948, soon after she arrived after the Holocaust. The village began as a moshav shitufi, or agricultural collective, in 1938, on fields purchased from a Turkish landlord. It is situated about twelve miles south of the northern border with Lebanon. There are agricultural fields, avocado groves, horses and chickens. There is a cemetery by the wadi, the creek that flows into the sea.

There has never been a funeral parlor here in Shavei Zion. In America, Jewish funerals can mean big business. But here in Israel, it’s mostly voluntary. And since Shavei Zion’s founding, the male members of the village helped bury the men; women help bury the women. We receive the dead in a modest little house that sits in the middle of the cemetery.

Burial circle members are never paid. The act of preparing the dead for burial is considered the purest kind of deed — the most benevolent, sacred gesture you can do for another. It is a task without compensation, without acknowledgement because the dead can never thank you. In fact, the literal translation of the Hebrew term for burial society, hevra kadisha, is “holy society.” In fact, some participants never reveal themselves because they want to do a good deed without public acknowledgement. You could call it Burial Circle Anonymous. I have been a part of the hevra kadisha since 1995, a few years after I moved here from New York. When I came here, most of the women in the hevra kadisha were getting on in years and needed help doing the physical work.   Three other women and I did the tahara, or purification, for Suzy. It’s a small village –a little more than a thousand residents – and we all knew her. We knew how the demons of her time in Auschwitz had trailed her and tormented her.

Before we began, we said a traditional prayer asking for help in performing this task with love with reverence. Then we began the tahara, or purification. We sprinkled Suzy with water from head to toes. According to sources in the Kabbalah, the sanctifying water is poured over the body beginning on the right side, the side of mercy, and then on the left side, the side of judgment. It reminded me that mercy must come first.

We then patted her body dry, making sure to keep her covered, granting her complete modesty. We never passed anything over her body: the space above her is still considered her space. As if she was still alive. Still present. Still with us.   We combed her hair to make her as beautiful as she could possibly be, one last time.

We then dressed her in shrouds made of simple, almost flax-colored linen. One of the women sprinkled some earth over her eyes to serve as a reminder that we go from dust to dust. Then we covered her face with a head bonnet.

The pants came next, oversized pants that reminded me of children’s footie pajamas. We had to bunch up the fabric and slide in her legs. There was a jacket with a sash, without zippers or buttons, to make sure the soul can escape. And there were no pockets. Of course not. What could she take on this ultimate journey? Whatever had been denied her in the past was no longer necessary.   After we finished, we recited another traditional prayer, asking Suzy for forgiveness if we had unintentionally hurt her in any way. Then we prayed that she would tread with righteous feet in the Garden of Eden.

The tahara ritual has always moved me. I always step out of the burial house feeling more aware of my life, and all of life.

But this time, the ritual had even more significance because it was happening on the very day that Auschwitz was liberated. Today, we granted Suzy her right to a Jewish burial, something denied her family and all those murdered in Auschwitz.

Today, the four of us in the burial circle stood around Suzy for another moment. We bid a loving farewell to one of the last remaining Holocaust survivors in our village.

One woman whispered, “Suzy has finally been liberated from Auschwitz.”

Diana Bletter is the co-author, with Lori Grinker, of “The Invisible Thread: A Portrait of Jewish American Women” (Jewish Publication Society of America, 1989). She lives with her family in the Western Galilee.