The abortion issue is back in the Supreme Court. What would my mother, and Jewish feminists of her generation, think? 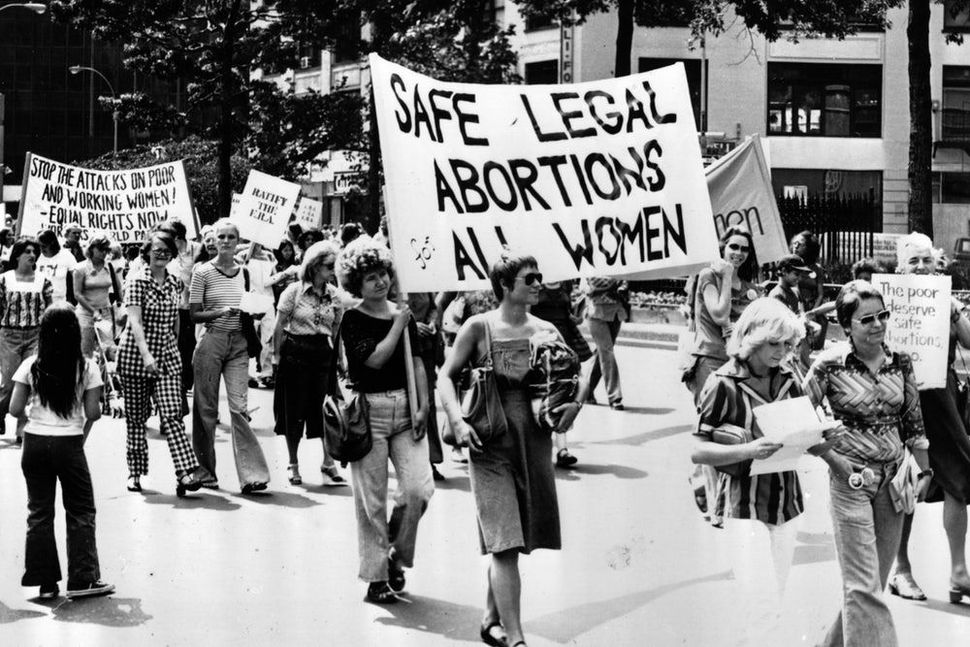 A pro-choice demonstration in New York in 1977. Image by (Peter Keegan/Keystone/Getty Images)

Yesterday morning, I filed into the Supreme Court, took my seat, and watched history unfold: I was there to observe the oral argument for the first big abortion case of the high Trump era — June Medical Services, LLC v. Russo.

This case has the potential, thanks to Trump appointees Neal Gorsuch and Brett Kavanaugh, to green-light harsh new restrictions on abortion access that would make the procedure virtually inaccessible to pregnant people in huge swaths of the country – more inaccessible than it is right now. This case will not lead to an immediate revoking of the nearly half-century-old precedent that is Justice Blackmun’s opinion in Roe v. Wade, but if the Supreme Court upholds the Louisiana statute at issue here, state-level politicians will be far more empowered than they already are to legislate major blocks to abortion access.

As I sat there, trying to keep up with the constitutional back-and-forth while admiring the tenacity of the squad of New York female Justices Kagan, Sotomayor, and Ginsburg, I couldn’t help but think of my mother, a tireless reproductive rights advocate based in New York City. What would she, and the Jewish feminists of her generation, think?

Indeed, what would my late mother, Beatrice Cogan Riedl Kornbluh Braun, pioneering Jewish woman lawyer and reproductive rights diehard, make of it all? Would she be shocked by the seemingly endless reversal of momentum in the feminist movement for reproductive rights, at least as it appears in opinions from the federal courts? Or would she find it par for the course, yet more evidence of the tenacity and brutality of sexism – beyond the evidence of her mother’s economic struggles as she raised four children on her own and my mother’s own slog through a misogynist workplace and experiences of sexual victimization?

My mother, who received her J.D. years before Justice Ginsburg more famously enrolled at a sexist Harvard Law School, was a passionate advocate for legal abortion. Throughout my childhood, whenever I raised the subject, she would say, with what I remember as clenched fists and a flushed face: “You don’t understand, Felicia! They” – the illegal abortionists – “were butchers! Butchers!” She played a role in the landmark decriminalization of the procedure in New York State that has been remembered by one of its architects as “perhaps only a footnote in history, but one that should be read.”

The law Mom helped pass was a decriminalization of abortion in New York State through the twenty-forth week of a pregnancy. Her role was lobbying our local state Assemblyman, Austrian Jewish refugee Franz Leichter, who became the law’s lead cosponsor.

That law was far more than a “footnote” in history. By eliminating criminal sanctions for doctors and patients over such a long period, and imposing no residency requirement upon seekers of abortion procedures, New York became the most liberal abortion jurisdiction in the continental United States above the municipal level. Thanks to the law, pregnant people from across the country found their way to doctors in New York. Often, they were helped by the Clergy Consultation Service, a network of clergy members that included several Reform rabbis, who risked prosecution for their willingness to help patients locate safe and affordable procedures. The data from New York were unambiguous: women from out of state arrived by the thousands. The cost of abortion declined. Maternal mortality dropped dramatically, especially for African American women. As Stanley Katz, a leading legal historian and alumnus of feminist battles in Illinois, said: “We all [in the movement for decriminalization of abortion] looked to New York” as a leader in legislative reform, which they understood as the most promising approach to legal change. “We never expected the Supreme Court to bail us out.”

My mother did not have much of a Jewish education, but her views on abortion mirrored those of most Reform and Conservative Jews in the U.S., and reflected what many authorities consider to be the Jewish legal position, with its roots in Exodus 21:22: That the life of the fetus is less important than the life of the mother carrying it, and the fetus is something less than a full human.

Countless times, my mother would interrupt conversations about healthcare with all three of her daughters with a warning to “never go to a Catholic hospital! All they care about is the fetus,” she railed. “Never the mother!”

My mother was only one of a group of Jewish feminists who played vital roles in reproductive politics in the era just before and after Roe v. Wade.

As I study reproductive politics in New York, I have found a rich history of Jewish feminist activism on the issue.

Among fierce advocates for the decriminalization of abortion were Jewish “liberal feminists” such as National Organization for Women cofounder Betty Friedan and the leading attorney with the American Civil Liberties Union (ACLU) Harriet Pilpel. Ginsburg herself strongly favored legal abortion, although her ACLU Women’s Rights Project did not litigate on decriminalization.

Other leaders on the issue were so-called “radical” feminists who were more comfortable with public demonstrations than my mother was. These included writer Susan Brownmiller, “pro-sex” journalist Ellen Willis, and Ms. Magazine founder Gloria Steinem, who has dated her feminist awakening to a 1969 “speak-out” on abortion in support of decriminalization in New York. Distinct from the “liberals” and the “radicals” were socialist feminists, who worked in interracial groups for legal abortion and for a wider reproductive agenda — women like attorneys Karen Stamm and Nancy Stearns, historian and novelist Meredith Tax, activist Sarah Schulman, political scientist Rosalind Pollack Petchesky, novelist Alix Kates Shulman, and historian Atina Grossman.

It seems that Jewish women were overrepresented in reproductive rights everywhere in the U.S., even in places where their numbers weren’t as overwhelming as they were in New York.

Why? Perhaps, like my mother, they learned or intuited a Jewish legal preference for the mother’s life over that of the fetus. And perhaps they felt the immediacy of challenges to reproductive autonomy as a result of Nazism, an object lesson in what can happen when ideas about good and bad bodies, including reproductive bodies, are weaponized by an intrusive and powerful state.

As the June Medical Services, LLC v. Russo case heads toward a resolution, I remember and honor all of these Jewish women activists — and I hope their hard work was not for naught.

Felicia Kornbluh is a writer and historian, a Visiting Research Fellow in Law and Public Affairs and Visiting Professor at Princeton in 2019-2020 and Professor of History and Gender, Sexuality, and Women’s Studies at the University of Vermont.

The abortion issue is back in the Supreme Court. What would my mother, and Jewish feminists of her generation, think?