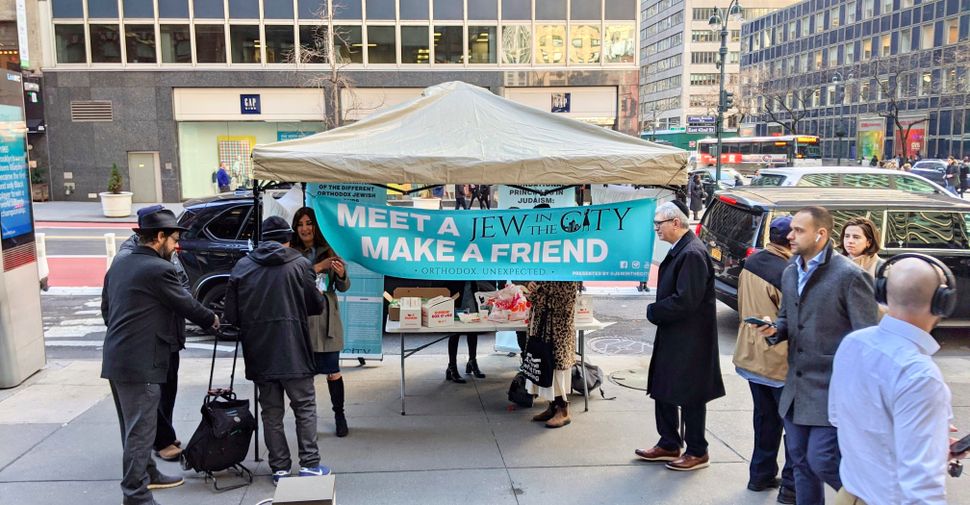 At lunchtime on a recent Thursday before the city came to a standstill due to coronavirus fears, 42nd Street was awash with New Yorkers in single-minded pursuit of kale salads and Mediterranean grain bowls. Even at the best of times, it’s difficult to interrupt the powerful flow of this daily migration. In recent weeks, as fear of coronavirus shuts down schools and empties subways, it’s nearly impossible to convince anyone to talk to a stranger.

But Allison Josephs was still trying. Standing with a corps of rubber-gloved volunteers outside a open-walled tent emblazoned with the slogan “Meet a Jew, Make a Friend,” she enticed the most germ-conscious passerby with kosher, individually wrapped rugelach and cups of coffee never touched by human hands.

A Orthodox speaker and lifestyle influencer, Josephs made her name by launching the website “Jew in the City,” a blog whose modest fashion round-ups and culture features cater to the chic set within the Orthodox world while trying to combat outside perceptions of her community as frumpy, backward, or close-minded. As New York faced a rash of anti-Semitic attacks in 2019, Josephs — by now a veteran at representing her community to outsiders — brainstormed ways to take a stand. If people could just talk to Orthodox Jews, she thought, they might be less willing to tolerate or perpetrate hate. In February, she hosted her first “Meet a Jew” pop-up in Harlem, where she handed out pastries and offered many curious visitors their first chance to have a friendly chat with an observant Jew.

The pop-up was so successful that Josephs moved to midtown in March, setting up shop near the site of a December 2019 assault on a yarmulke-wearing Jewish man.

But combatting a figurative outbreak of prejudice is especially difficult in the midst of a literal outbreak of disease. “Doing this in the middle of coronavirus, we weren’t sure if anyone would even talk to us,” Josephs said.

Plenty of people rushed by with nary a glance, but others ducked happily or hesitantly inside the tent. An Indian-Canadian family on vacation in the city told Josephs about a moving trip to the Museum of Jewish Heritage. Volunteer Daniela Wrubel served up coffee in Spanish and, during red lights on 42nd street, leaned down to chat through the open windows of stalled cars.

One man gratefully accepted the free coffee, explaining that he had just quit his job. For Josephs, it was a testament to the potential for unity among communities that, despite diverging lifestyles, share similar experiences.

“He’s Christian, I’m Jewish, but we both understand a toxic work environment,” she said.

Amid gestures of solidarity, there were some reminders of the anti-Semitic sentiment that prompted the pop-up in the first place. One man responded to an offer of coffee by derisively asking, “Why would I want to meet a Jew?”

And an ADL staffer who happened across the tent said he had a just attended a staff meeting to discuss how the coronavirus outbreak has been fueling anti-Semtitic internet chatter.

It’s impossible to know if chatting with a friendly Chabadnik or a woman in an enviably well-styled wig will keep people from channeling their coronavirus fears into online conspiracy theories. But in terms of pastries, Josephs reported, her second pop-up was even more successful than the first — by the end of the afternoon, she had given out over seventy rugelach, each in its own plastic bag.

Irene Connelly writes about culture and lifestyle. You can contact her at connelly@forward.com.