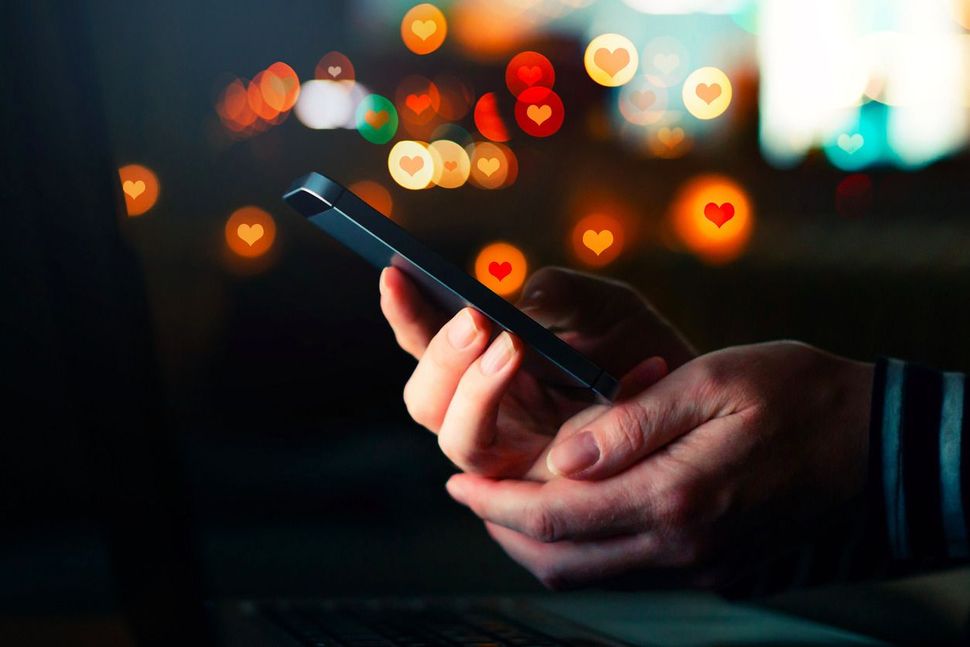 You may not be able to buy toilet paper, but you can still search for your Jewish soulmate online. Image by istock

In our new era of social distancing, most people are focusing on what they can’t do. In New York and other cities, it’s now impossible to have dinner out or grab coffee with a coworker. You can’t get your nails done or see a film.

But there’s one pastime that is proceeding without interruption: online dating.

As public spaces have shut down and many companies transitioned to working from home, engagement on the Jewish dating sites JDate and JSwipe increased between 10% and 20%, according to JSwipe founder David Yarus.

“For sure, we’re seeing an increase in activity during off-peak hours,” he said, referring to hours during the work day when fewer people have time to swipe through potential matches. “People are turning to the apps to supplement the human connection they’re getting offline.”

JDate, founded in 1997, is an online dating site that matches potential couples based on shared interests and hobbies. Its younger cousin JSwipe, which debuted in 2014, is a Jewish complement to nondenominational swipe-based dating apps like Tinder or Bumble.

An increase in swiping may not immediately translate into lasting Jewish connections. It’s difficult to gauge compatibility with a potential partner based on a tightly edited profile and a stream of online small talk, and veterans of the online dating world have urged users to take the conversation offline as quickly as possible. Still, with happy hours and public gatherings off limits for the foreseeable future, it’s hard to make that necessary leap.

But Yarus said that an unexpected shake-up in dating protocol might encourage people to experiment with new dating etiquette. Many dating coaches suggest having a brief FaceTime call before a first date, in order to “vibe check” before committing to an in-person rendezvous. Historically, Yarus said, app users have been reluctant to adopt this practice.

“In these new times, more and more people are going to try new things that they haven’t been comfortable doing,” he said. “And eventually, that could become a new tool in their dating toolkit,” he said.

While platforms like JDate and JSwipe are geared towards Conservative and Reform Jews, the Orthodox don’t have to twiddle their thumbs until the end of social distancing. They can turn to ShidduchView, a marriage-oriented dating app designed by New York-based entrepreneur Ben Tzion Elchonen that takes its name from “shidduch,” the system of arranging marriages within the Orthodox Jewish community. ShidduchView users answer an extensive questionnaire about their values, interests, and expectations for a spouse. Then they’re paired with potential partners for a series of video calls. Only after five virtual dates are they allowed to meet in real life (while the app can’t enforce this restriction, Elchonen hopes it will attract, in his own words, “marriage-minded” people willing to play by its rules).

Elchonen sees ShidduchView as a way to make the Orthodox matchmaking system available to a wider swath of the Jewish population. He stressed that the app was in the works long before coronavirus. But for those who don’t want the virus to halt the hunt for a soulmate, the app, which debuted in February and, according to Elchonen, currently has approximately 1,000 users, couldn’t have arrived at a better time.

Meanwhile, some Jewish singles are taking matters into their own hands. On Zoom University Hillel, a Facebook group where over 11,000 college students have congregated since campus closures, Colorado College sophomore Sophie Cardin started her own matchmaking service, creating a Google Form that asks hopeful singles to submit a short bio and answer questions like, “What do you want to be when you grow up?” The choices: “doctor,” “lawyer” or “other.” After receiving about 300 responses in less than a day, Cardin closed the form and recruited other yentas from the Facebook group to connect matches via email.

And on the Facebook group MetJew University, posters can submit glowing descriptions of single friends and their specifically Jewish merits. “Samuel will have every Jewish mother wishing he will never Tel-A leave,” wrote one student, while another described her friend as “thiccc as your bubbie’s matzoh balls.”

Yarus says that staff at JSwipe will be reaching out to users to see what resources they need during this unprecedented dating moment, and to share ideas and tips for safe online dating.

As for him, he’s practicing what he preaches. “I had my first ever FaceTime date this week,” he said. He’d matched with another JSwipe user several days ago, but their plans to meet up in person were scuppered when bars and restaurants in New York City were closed.

It’s not the kind of first date he would have suggested before coronavirus. But, he said, “It went great.” He’s ready for round two.