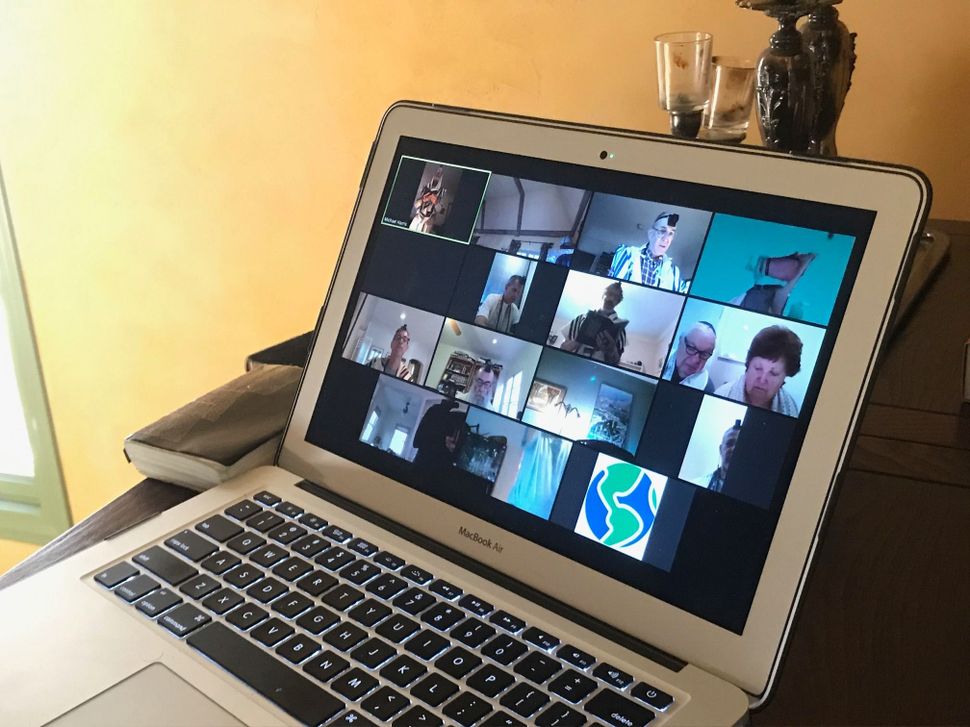 This is what a virtual minyan looks like. Image by Rabbi Adam Kligfeld

In the beginning of March, before the full impact of COVID-19 began to descend upon our country, and our consciousness, when it was still possible to speak about it seriously-but-also-lightly, I gave a sermon on Shabbat morning entitled “Intimacy without Touch.”

In it, I valorized the Jewish instinct, honed over centuries and played out through Jewish laws and rituals, to find closeness even when physically distant. To name just one example, married couples can create such intimacy, without physical touch, surrounding the rhythms of the monthly immersion ritual of mikvah. I also mentioned the meals and activities held in “noble silence,” during a meditation retreat I participated in. For those extended minutes and hours, without verbal tethers to adhere us to one another, we all somehow felt very intimately connected to one another. We looked into others’ eyes with gazes that would seem awkward and even impolite in other settings, but which, within that noble silence, drew us powerfully close to one another. We can touch, and be touched, without touch. We can be present even in absence.

Three weeks ago seems like two years ago; life continues to upend itself as the crisis deepens. But within the dark crucible, we have experienced enormous illumination in the Jewish ritual realm. Our spiritual muscles, thousands of years old, have been asked to flex in response to this extraordinary human moment.

To the Jew, prayer is always needed. Always obligated. Jews pray regularly, rhythmically. Not (only) in emergency, but so that in an emergency, we already have language, and movements, and rituals, which have been sustaining us since time immemorial, to sustain us when circumstances are most dire.

With inspiring alacrity, the Jewish world has sprung to inventive action in order to rescue the notion of prayer, and the minyan (prayer group of 10), from the plague’s grip. Within days (hours?) of communities’ realizing that in-person prayer would be discouraged, and then prohibited, rabbis and community leaders — some scouring the sacred tomes for precedents, others scouring only their own hearts and the needs of the moment — came out in support of a variety of digital minyanim.

Each community has set its boundaries differently. I serve as the senior rabbi at Temple Beth Am in Los Angeles, where we sustain a thrice-daily egalitarian daily minyan. Our current guideline: provided an actual quorum of 10 have joined via video-conference and thus can see one another, we will consider the gathering to be a minyan — but just for the purposes of reciting the Mourner’s Kaddish. For now, we are not reading the Torah or engaging in other prayers in the category of דברים שבקדושה/d’varim shebikdusha, or particularly sacred utterances.

We assign a “leader” for each service, who essentially prays the service as if s/he were doing so individually, omitting sections requiring a minyan, but including the Mourners Kaddish.

So far, the experience has not lacked holiness. It has overflowed with it. The e-minyan has shown that we Jews have been preparing for moments like this for generations. We know what to do, and how to do it, so that people apart can feel close. As when we invoke the name of an ill loved-one in a misheberakh prayer, and s/he feels proximate.

After a few moments of awkwardness, which I associate more with the new technology (everyone mute themselves, please!) than the notion of digital prayer itself, our e-minyan has fallen into a groove. Page numbers are announced. We hear one unmuted person say amen to blessings as we intone our own. And somehow it feels not less intimate than in-person prayer, but more. Why? How often do I see so deeply into another’s eyes as I pray, or as she does? With the camera so close, I see wrinkles on faces, and can infer others’ reactions to certain prayer moments or words in the liturgy, much more intimately than when we are sitting in a pew. We are invited into one another’s living rooms, family rooms and even bedrooms, replicating some of what is most intimate and sacred when at a shiva (mourning) minyan, when prayer is moved from sanctuary to home.

Sages across time have suggested that Jews have a makom kavua, a “set place” to sit in synagogue, so that the experience of being there is the opposite of random. In the absence of access to our actual synagogues, we are now exposed to one another’s other, even more intimate “set places” within our homes. This is not prayer, attenuated. It is prayer, accentuated.

Several things have made me cry since we launched our e-minyan. The notion put forth by one member, immediately echoed by the whole group, that those davening, or praying, should still put aside a bill or some coins in the traditional moment when the tzedakah (charity) box goes around the minyan. When this is all over, we’ll bring in the pile of bills and coins we have been heaping up. For, of course, generosity will be needed more in this moment, and beyond, not less.

I have cried as our e-minyan has added special penitential prayers, the traditional Jew’s way of indicating that things are not normal. We say the Avinu Malkeynu prayer usually reserved for the High Holidays and public fast days. There is something about having those words fall out of one’s mouth, and hearing the iconic tune to the last line, that awakens the spirit to urgency. We have added an antiphonal recitation of Psalm 130, in which we say that we are calling out to God from the lowest depths. And we have now added a special prayer for this incomparable moment composed by a dear friend and colleague, Rabbi Gustavo Surazski. These prayers bring tears to my eyes. And I welled up the first time we tried to bring e-comfort to a mourner in shiva, who could not attend her own father’s funeral, but who could still hear — and feel — our blessing her and offering her comfort among the mourners of Zion and Jerusalem.

This digital prayer is possible. And hopeful. And it is hard, because these circumstances are so very hard. And even with all the sweet moments I have experienced, I know in my gut that something tender and essential is missing from this digital minyan. No matter how much I explain — to myself and to others — that this is a darn good facsimile of in-person prayer, we Jews also know that it aches to be in exile. As my colleague Rabbi Seth Haaz expressed to me, this is a diasporic moment. And it feels that way. It should feel that way. The negative power of the diaspora fuels the single-minded intent to end it. We can, and must, make our digital prayer experiences as meaningful and authentic as we can. And we must all redouble our efforts not only to bring our entire society back to a place where real gathering is safe and doable, but also towards recommitting to that very in-person prayer experience when it is once again permitted.

I can sense the elation of that first Shabbat back. I can taste the spiritual and communal ecstasy of that reunion, that rebirth, that re-emerging from the suffering of this generation’s Egypt. In the meantime, we will Zoom our prayers, and Go To our minyanim. And when the day comes, I expect us all to zoom to shul and go back to our sanctuaries. To connect, once again, in person. To pray, once again, truly together. And that includes you.

Adam Kligfeld is the senior rabbi of Temple Beth Am, a Conservative synagogue in Los Angeles.