Everyday heroes: They’re caring for kids while schools are closed 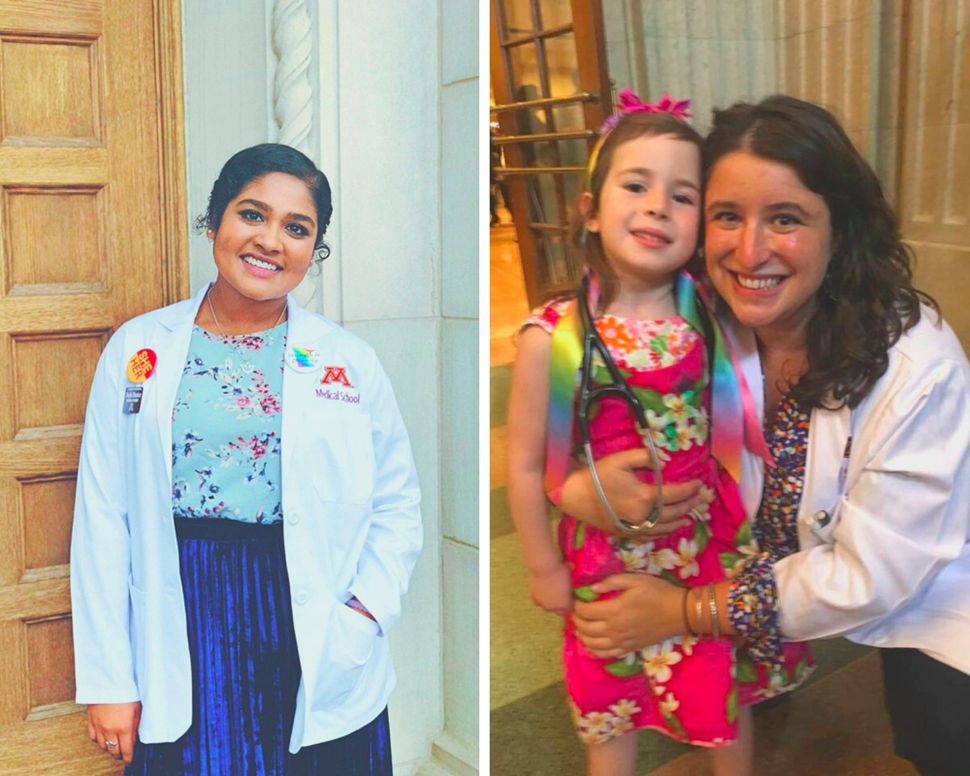 The Forward asked readers to tell us about the “everyday heroes” in their lives, people extraordinary things in this extraordinary time. If you know someone acting heroically right now, let us know — we’ll be adding to the collection in the coming days.

What they’re doing: When classmates Sara Lederman and Sruthi Shankar learned that classes were moving online, they were devastated at the prospect of spending months without seeing a patient. But they were even more worried about their teachers who had been thrust into dangerous work on the frontlines of a global pandemic.

“When you think about the doctors who taught you to hold a stethoscope and the nurses who held your hand on the first day of rotation…it really felt personal,” Lederman said.

She and Shankar began brainstorming different ways to help frontline healthcare workers. At first they hoped to gather a dozen people to do grocery runs for doctors and nurses. Instead, they tapped into an urgent need for childcare and realized how many medical students were itching to do something helpful. One of Lederman’s friends designed a website overnight; another worked to develop an app. Within a week, the grassroots group had a 13-member board, 100 volunteers, and a name: CovidSitters.

How it works: CovidSitters matches healthy frontline workers — including hospital cleaning crews and cafeteria workers — with student volunteers who provide free childcare, a rare commodity now that most schools and daycares have closed. If healthcare workers are ill or in self-quarantine, CovidSitters organizes grocery drop-offs instead of in-person services: Lederman herself is currently running errands for a nurse and single mother who has tested positive for the coronavirus.

In a time of disruption and uncertainty, a sympathetic babysitter can help kids parse events that are overwhelming for many of the adults around them. Lederman said one volunteer sent a photo of a three-year-old charge who wanted to dress up like his mother, a doctor. The outfit he chose to represent her work? His superhero Halloween costume, augmented by a homemade paper mask.

Where it’s going next: CovidSitters primarily serves families in the Twin Cities area, but Lederman and Shankar are providing a “starter pack” of their protocols and risk mitigation procedures to volunteers eager to start similar initiatives. Lederman said they’ve received over 100 requests so far, from cities as close as Milwaukee — and countries as far away as Sudan.

Irene Connelly is an editorial fellow at the Forward. You can contact her at connelly@forward.com.

Everyday heroes: They’re caring for kids while schools are closed