Everyday Heroes: She’s sourcing masks from every corner of Facebook 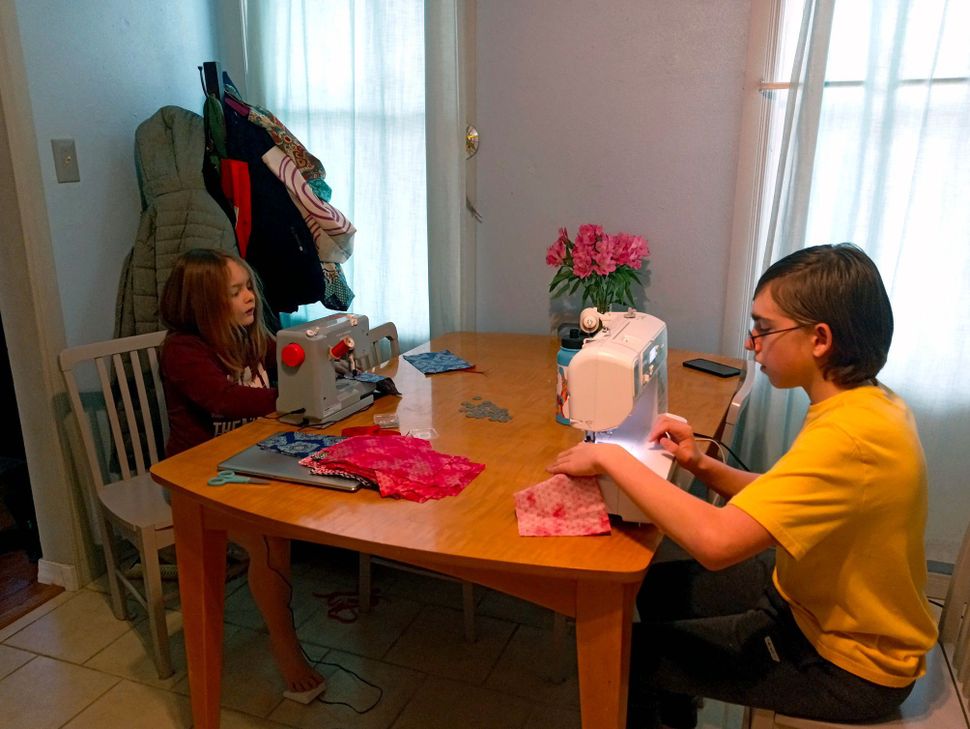 Two of the youngest mask-makers on Leinberger’s far-flung team. Image by courtesy of Rena Leinberger

The Forward asked readers to tell us about the “everyday heroes” in their lives, people extraordinary things in this extraordinary time. If you know someone acting heroically right now, let us know — we’ll be adding to the collection in the coming days.

How she started: What she’s doing: An artist and professor based in the New York town of Newburgh, Leinberger has received treatment for a chronic illness at the same clinic for years. So when she arrived for a routine appointment in mid-March and saw a doctor wearing a dust mask, she knew something was really wrong. Like many, she’d been following the spread of coronavirus for weeks. But that was the moment when she “fully realized what was going to happen,” she said.

Leinberger left the appointment worried for the doctors whose daily work had suddenly become life-threatening, and she spent an afternoon researching different methods of making handmade cloth masks, which makers across the country were already churning out in hopes of protecting frontline workers. There was plenty of disagreement as to best practices, she found, and many healthcare facilities accepting masks had different specifications for patterns and fabric.

While Leinberger herself is an indifferent seamstress, she knew she could be useful organizing mask-makers and distributing their work. The next day, she launched a Facebook group to connect makers of masks to those who could use them.

How it’s working: Through the Facebook group, mask-makers can choose between different mask patterns used by different healthcare facilities. When they’ve finished a batch, they can mail them to Leinberger or leave them at a network of drop boxes across the Hudson Valley. Leinberger then distributes each batch to the right recipient. The immediate response was so strong that Leinberger recruited two women from her synagogue, Alison Spodek and Kimberly Ruth, to manage logistics, adapt mask designs to evolving medical guidance, and help with outreach.

Just over a month later, the three have sourced and distributed about 6,000 handmade masks to 31 different healthcare facilities. Many come from less affected states who want to help hard-hit areas: when contacted by the Forward, Spodek said that she had just received a shipment of 50 masks from California. And since many people are using the group to organize informal mask donations in their own communities, the impact may be even larger.

Leinberger said she was moved and heartened by the collaboration she’s encountered throughout the project, from moderators of similar online groups who share resources and ideas to friends who have used her Facebook group as a template to start similar initiatives in their own communities. Their response reflected the sense of communal responsibility that had prompted her to action.

“This whole project came out of a sense of obligation,” she said. “It came out of rage and sorrow, and some part of my Jewish identity, the idea that we need to look out for each other.”

Everyday Heroes: She’s sourcing masks from every corner of Facebook