The Book of Ruth: A story about famine offers a powerful lesson for a pandemic 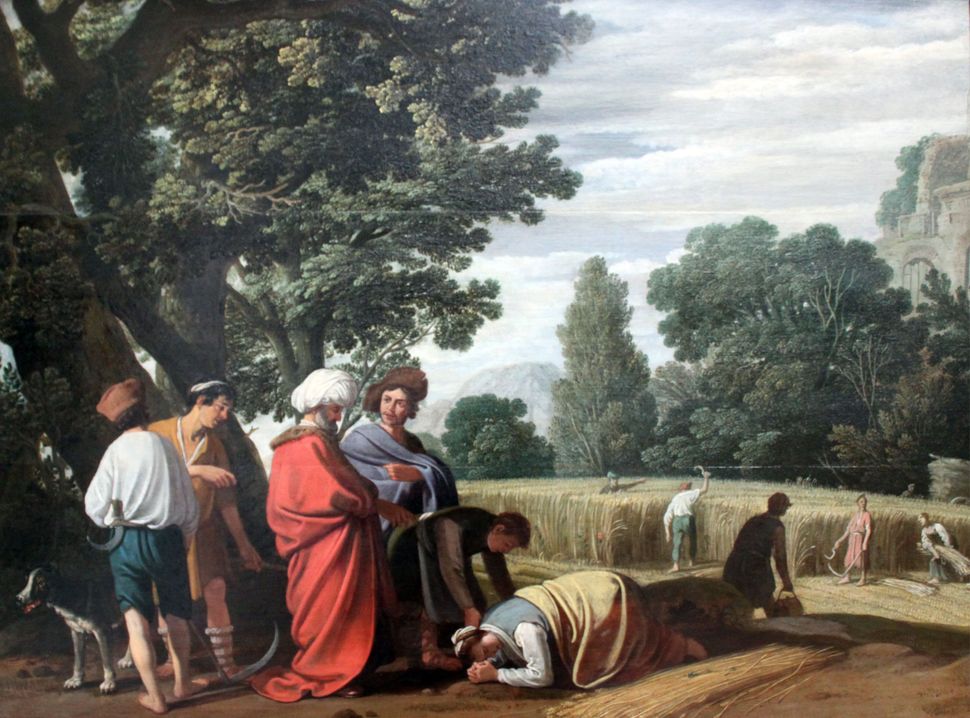 The story of Ruth at the heart of Shavuot has a striking relevance to our global pandemic: it begins with a natural disaster.

Human drama is at the heart of the story of Ruth: the love between Ruth and Naomi, the anguish of those who lose it all, Ruth’s commitment to Naomi’s people, and the individual attempts to redeem the name of those who have passed. The pastoral elements of the barley harvest seem simply like a backdrop, like the natural elements needed to tell the story of ancient women and men.

But the scroll of Ruth is defined by a natural disaster that occurs at its beginning and that we sometimes overlook: a famine. Elimelekh and Naomi move their family from Judah to Moab in the wake of a famine. This locates the story of Ruth as the ensuing human drama that follows a natural disaster.

While Ruth does not dwell much on this famine, the Bible – especially Genesis – shows how famines shape the lives of men and women in the ancient world. Abraham and Sarah, Isaac and Rebecca, Jacob’s children – all of them see their lives upended by the ravages of famines. In the ancient world one dry harvest, one failed crop, could mean the difference between survival or starvation.

The most obvious consequence for biblical famines is that of involuntary migration. Our patriarchs and matriarchs move to Egypt and to Gerar to beg for sustenance, to barter for bread. While the need to find food to survive prompts their departure, their journeys also describe the dangerous position of vulnerable migrants, of refugees from famine who are desperate for sustenance and at the mercy of people who see them as foreigners. Abram and Sarai’s journey depicts this sharply. They migrate to Egypt to beg for bread and know it is likely they will face the predatory reach of powerful Egyptian men who will try to exploit them.

Jacob’s sons encounter similar dynamics. Their families are hungry due to famine in Canaan and so they journey to nearby Egypt, which has food aplenty. The Egyptian Viceroy (secretly, their brother Joseph) toys with them, falsely accusing them of theft. Their plight might be unique to their own family drama, but it represents the power that food-wealthy societies have over desperate and vulnerable men and women.

These biblical narratives affirm one of the most significant theories in famine studies: that starvation is not a function of scarcity, but rather a function of how societies distribute food. Economist and philosopher Amartya Sen’s groundbreaking work, Poverty and Famines (1981), rejected the longstanding paradigm which examined famines in terms of food availability decline. Sen argued that famine-related starvation occurs when individuals do not have access to enough food. Sen’s theory explains the perversity that modern hunger represents: there is enough food in our world to feed everyone, but not every person or society has access to food.

Sen’s work demands that instead of examining food availability, we should be investigating whether individuals can gain access to food and control food resources. This shift is borne out by the Genesis stories. The Mesopotamian region and neighboring Egypt could potentially feed everyone. But Abram, Sarai and their children must fight to get access to food, and must confront the dangerous vulnerability embodied by economic migrants. In Ruth, this motif remains. The text precedes Elimelekh and Naomi’s travel to Moab with a famine. We can assume that the famine in Judah prompted their family’s move– perhaps seeking better access to food security or, as Rashi argues, using their family’s wealth to insulate themselves from the growing need of their Judean neighbors. Either way, they travel forth but lose it all. Just as the Judean land was barren, Naomi’s family becomes devastated by poverty and the death of all her male relatives.

This reversal of fortunes results in Naomi’s economic migration back to her homeland, which is no longer enmeshed in the ravages of famine. Naomi has turned the famine motif on its head: famine led to a series of events that resulted in her journey back home, though destitute and hungry for sustenance. She is hungry, but at least does not have the vulnerability of a stranger.

It is Ruth’s decision to accompany Naomi back to Bethlehem that reinstates the original famine motif from Genesis: economic migrants who are also foreigners. Ruth’s persona is intersectional: she embodies the vulnerabilities of women, of widows, of economic migrants, of foreigners, of stigmatized strangers (she is a Moabite). When Ruth commits herself to Naomi’s journey, she is revisiting Abram and Sarai’s footsteps, joining herself to the lineage of the men and women who avoided starvation by becoming vulnerable strangers. She is also rejecting the heritage of her people-by-birth, the Moabites. The Moabites are known in the biblical narrative for turning away the hungry people of Israel who were journeying in the desert seeking bread and water. It is her choice to become a vulnerable economic migrant – a choice made from love and dedication to Naomi – that frames Ruth’s journey.

Throughout the four short chapters of Ruth we learn about the fates of vulnerable women who are hungry. Naomi and Ruth are reduced to the most public forms of poverty: to leaning on the kindness of others, to collecting fallen barley stalks from fields. Ruth’s actions in Boaz’s fields tells the story not only of hunger but of its intersection with foreignness. When Boaz asks the youth working his field for Ruth’s identity, he answers that she is a Moabite girl. Her identity as a stigmatized migrant is paramount. This is underscored by Boaz’s directive to Ruth. He tells her that he instructed his workers to not bother her and advises her to glean from his field, where she will be safe. His words imply that she might face abuse or exploitation elsewhere, perhaps because she is a Moabite. These narrative elements reaffirm the key famine motif. The natural disaster of famine is never solely to blame for hunger or suffering: It is human prejudice and avarice that can take advantage of a natural disaster to oppress the others.

It is here that Ruth provides a morally urgent voice for us today. We are still in the middle of a global pandemic, still battling a virus that has brought our world to its knees. Our scientists have isolated its genome and are racing against the clock to manufacture the right scientific interventions to give us artificial protection from this natural disaster. But the famine at the start of Ruth reminds us that natural disasters are only the beginning. The extent of the human and social catastrophe our world will experience depends on human actions, on how individuals and communities react. Will we use this moment of natural disaster to invite or to resist human injustice?

Our human injustice is not the same one associated with famines. Pandemics combine the intersection of the global and the local, the strange and the familiar. Migration is the conduit for a plague’s spread, not its social consequence. Our response to plagues is the opposite of hungry migrants’: we hunker down in our homes, we try and find hermetically sealed ways to protect ourselves and our loved ones.

In her book Contagious, Pricilla Wald provides a theoretical exploration of contagious diseases, of plagues. She explores how individual carriers of diseases achieve a metaphorical metamorphosis. They become “the representational figures of the fact, the danger, and the possibilities of human interdependence in a shrinking world.” Our fear is that any fellow human, even our closest neighbor, friend or family member, can be a carrier. This anxiety transforms the way we approach each other. The mere proximity of other humans is dangerous. As Jill Lepore described in her exploration of plague narratives, the enemy in plague is other humans. “The touch of other humans, the breath of other humans, and, very often—in the competition for diminishing resources—the mere existence of other humans.”

Our sacred texts do not include a narrative-rich scroll dealing with the aftermath of pandemics. But the natural disaster at the start of Ruth must compel us to heed its urgent message. Ruth teaches us that the only way to transition from the ravages of a natural disaster towards the birth of the messianic dynasty is to sensitize ourselves to the potential for human wrong that can find fertile ground in natural disasters.

Ruth teaches us that is a better, different way. The story of Ruth has a happy ending: the vulnerable foreigner scavenging for food finds a home. She is full, she has familial security, and she gives birth to a son whose son fathers king David. The danger of famine is averted — and its alternative heralds messianic redemption.

We too have a choice in front of us.

When we think about our communities and neighbors, we can approach them as carriers of contagion, as dangerous, or as fellow beings created in the divine image.

We can become indifferent and callous, invested in only preserving ourselves and ours.

But we have an alternative. We can orient ourselves to double down on our commitment to see each individual and their particular needs and experiences beyond being potential threats to us. Doing so will help us include others, especially the most vulnerable, in our moral imagination and allow us to work tirelessly for the common good.

The choice is ours. The Messiah is waiting.

Dr. Mijal Bitton is a Fellow in Residence at the Shalom Hartman Institute of North America and Rosh Kehilla of the Downtown Minyan.

The Book of Ruth: A story about famine offers a powerful lesson for a pandemic