‘If not now, when?’ Thousands of American Jews apply to move to Israel in pandemic 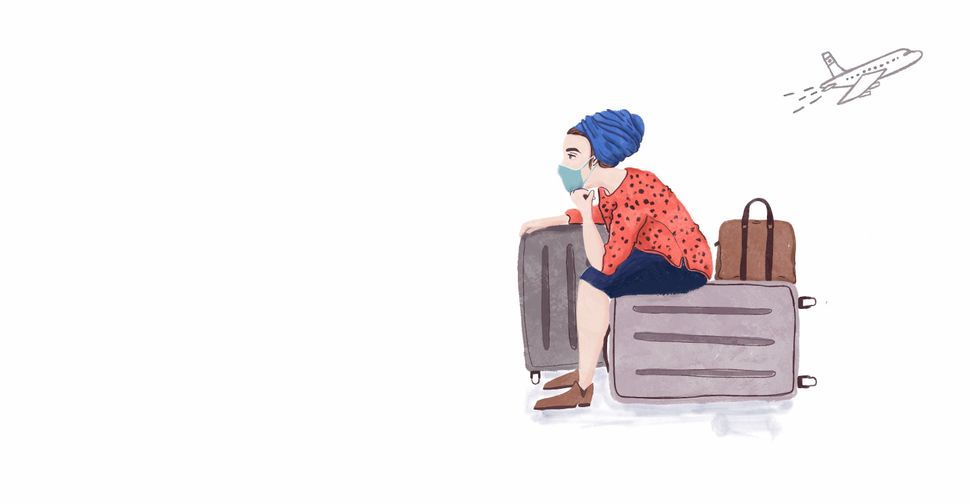 More American Jews applied to immigrate to Israel or inquired about it in May than in any single month over the last two decades, according to Nefesh B’Nefesh, a nonprofit organization that promotes Jewish immigration to Israel.

Despite aliyah being stalled by the office closures, canceled flights and quarantine requirements because of the coronavirus pandemic, 814 families and individuals submitted formal applications for Israeli citizenship and 1,178 more opened files beginning the process, the organization said — nearly double the combined total of May 2019. Nefesh B’Nefesh officials and many aspiring olim interviewed said the spike reflected growing anxiety among some American Jews about their future in a country torn apart by a pandemic, economic decline, political turmoil and social unrest.

“Whenever there are tumultous times, anti-Semitism is on the rise,” said Raphael, a 34-year old nursing home-hospital liaison who lives in Great Neck, N.Y., with his wife, Chana, and four children. “As a Jew, I want to be with my own people and my own country.” He spoke on condition his last name not be used because his employer does not yet know that he plans to emigrate.

“It was always one of our dreams, but then life got in the way,” Chana added. “And then Covid happened, and I lost all my part-time jobs, my husband’s job is also kinda on the line, and we were like, if not now, when?”

While May saw the biggest jump, inquiries and applications to emigrate have actually been up since the pandemic began in March, according to Nefesh B’Nefesh, which serves as a liaison between American Jews, the Jewish Agency for Israel and the Israeli government. In addition to the increase in applications, the group has seen a staggering rise in initial phone queries about aliyah — more than twice the 5,000 in the same month a year before.

Brenda Zalter-Minden, a 62-year old retired social worker living in Toronto, applied to make the move as soon as Israel closed its borders; her daughter and three grandchildren already live in the seaside city of Ashdod. “I don’t want anyone to tell me ever again that I can’t get to my child and grandchildren,” said Zalter-Minden, who hopes to take the first available flight in July.

Avromy, a 29-year old physical therapist living in Elizabeth, N.J., had always planned to make aliyah, but had moved up his flight date after being furloughed from his job in geriatric care in March. “It started making me rethink – the biggest thing that makes people stay back is probably money,” said Avromy, who plans to move June 8, on a small group-flight organized by Nefesh B’Nefesh, and who asked that his name not be used for privacy concerns. “This crisis made it really clear how easily things can go south here. You can lose your job today or tomorrow.”

For S. a 27-year old physician assistant in Silver Spring, M.D. who spoke on the condition of anonymity because of employment concerns, said the pandemic’s pushing both work and religious life online had led her and her husband to join the throng applying for aliyah last month.

“Now that telemedicine is blowing up like crazy, it’s more reassuring for me job-wise,” she said. “One of the main things holding me back” before, she added, was “the community here in Silver Spring. I love my community. But the fact that we’re not getting back to normalcy for a long time, it’s kind of silly to stay for a community that I can’t physically be part of anyway.”

Sitting on their suitcases

For some of the 2,000 American Jews who had planned before the coronavirus hit to make the move this summer, the pandemic has both validated their decision — and made implementing it much more complicated.

Typically, more than half of Americans who make aliyah each year do so in the summer, but Nefesh b’Nefesh’s charter flights have been canceled. United is still operating its daily New York-Tel Aviv route, but the Israeli government is requiring anyone who arrives to stay in quarantine for two weeks — hardly the ideal way to start one’s life in a new country. Those still in the process of applying for permission to emigrate have had their paperwork stalled because offices in Israel and the United States had either shut down or worked with skeletal crews.

And anyone whose paperwork was not complete before May 1 now has to wait for an FBI background check, which can take up to 16 weeks, under a new Israeli law aimed at preventing sex offenders from seeking refuge there.

Sefira Lightstone has dreamed of living in Israel since she spent a year after high school studying in the mystics’ city of Safed. Now 32 and pregnant, Lightstone was ready to move this May to Efrat, a settlement not far from Jerusalem, with her husband and their 7-year-old daughter. Then the pandemic hit, and her plans — her dreams — were put on hold.

Lightstone, an illustrator who moved to Seattle six years ago so her husband could study coding in preparation for a career in Israeli hi-tech, had hoped to be settled in Israel before her July due date. Now, she is hoping to leave in September.

“It was very challenging for me, because I am so emotionally ready to leave Seattle,” she said. “We moved here originally to make aliyah. I’ve been in this pause mode for years, and finally we could go, and then it was like, ‘No, you can’t move now.’”

In WhatsApp groups of American Jews planning to make aliyah this year, anxiety is high. “Some people are saying, ‘They have to let us in, because we’re olim and they want us there!’” Michal Geiger, a mother of five who lives in Springfield, N.J., said in an interview. “I’m sure they do, but Israel wants a safe country, and they’re not letting people in from unsafe places.”

Devorah Cohen, a special-education teacher based in Houston, plans to make the move with her husband and daughters in July. “We will be quarantined for two weeks, in an apartment with no furniture, because they won’t allow deliveries,” she said. “So we’ll just have to bring air mattresses with us.”

Cohen and her rabbi-husband, Yaakov, had spent 19 years in Texas working for various Orthodox-outreach organizations; his kashruth certification business, Whole Kosher Services, lost 15 of its dozens of clients since the start of the pandemic. “We were relying on that money for the move, so it’s hard,” she said. “We took a loan.”

Cohen, like others interviewed, said they were eager to move in part because, as she put it, “Israel is the safest place in the world in terms of corona,” citing the government’s swift shutdown and use of contract tracing to control the virus’s spread.

And, like others, there is also a particular personal calling: the Cohens’ son, Raphael Elisha, died at age 6 in 2014 after a two-year battle with medulloblastoma, a cancer of the brain and spine. “We buried him in Jerusalem next to my dad,” she said. “Now, I just want to be close to him.”

L’via and Charles Weisinger, who live in Teaneck, N.J., have been talking about aliyah for 32 years. Three of their five children live in Israel. One son, Yonatan, is engaged to be married there; the wedding has been postponed to November in hopes his parents can attend. “God help me get to this wedding,” L’via Weisinger said.

Weisinger, 52, was slated to meet March 15 with an Israeli Ministry of Health representative to obtain an Israeli nursing license; she said she has been unable to reschedule it virtually. In the meantime, Weisinger has continued working in the maternity ward at Valley Hospital in Ridgewood, N.J., where she said that many of the new mothers tested positive for Covid. In the evenings, she has been packing, selling and donating furniture — though she has yet to put her house on the market because she is still trying to arrange the required FBI background check.

“We are not taking no for an answer,” she said. “I have been on this train for quite a while, but it’s a journey and God is the conductor.” Weisinger, whose husband is immunocompromised, said that for her, it’s urgent that they make the move soon. “I want to be there before the next wave” of coronavirus, she said. “I need to get in the door before they close it again.”

Geiger, the New Jersey mom who said anxiety of aliyah chat-groups is high, has put her home up for sale — but also secured her children’s spots in their U.S. yeshiva in case their planned August move doesn’t happen.

For her, the decision is motivated in part by fear. “I don’t see America welcoming Jews for much longer,” she said. “We go through waves — anti-Semitism we experienced in the last year was just a taste of it. As soon as things get worse, depression-wise, next year will get worse once the PPP runs out, there will be tons of layoffs. And who gets blamed when things go bad?”

Meanwhile, in Charleston, S.C., Rabbi Moshe Davis and his wife, Ariela, both 38, have been packing for months while saying farewell to the community of Brith Sholom Beth Israel Synagogue, where they have served for eight years.

“Leaving my community will be hard — in Israel, rabbis are a dime a dozen,” Rabbi Davis said. “But living in the land of our people, and giving my children all the opportunities that Israel offers, seems well worth it. And maybe encouraging, by example, others to follow their dreams makes it worthy, too.”

Ariela Davis said that “when the pandemic started, some of the synagogue board members offered us to stay here.”

“They said, ‘You don’t want to go to Israel during a recession,’” she explained. “We love this community, but we decided we will go for it. It was crazy before, it is crazy now, and it’s all the hands of Hashem.

“If anything, when they closed down the borders — it made me think,” she added. “If I have to be closed in, where do I want to be?”

‘If not now, when?’ Thousands of American Jews apply to move to Israel in pandemic