Q&A: a pair of podcasting dads on parenting through the pandemic 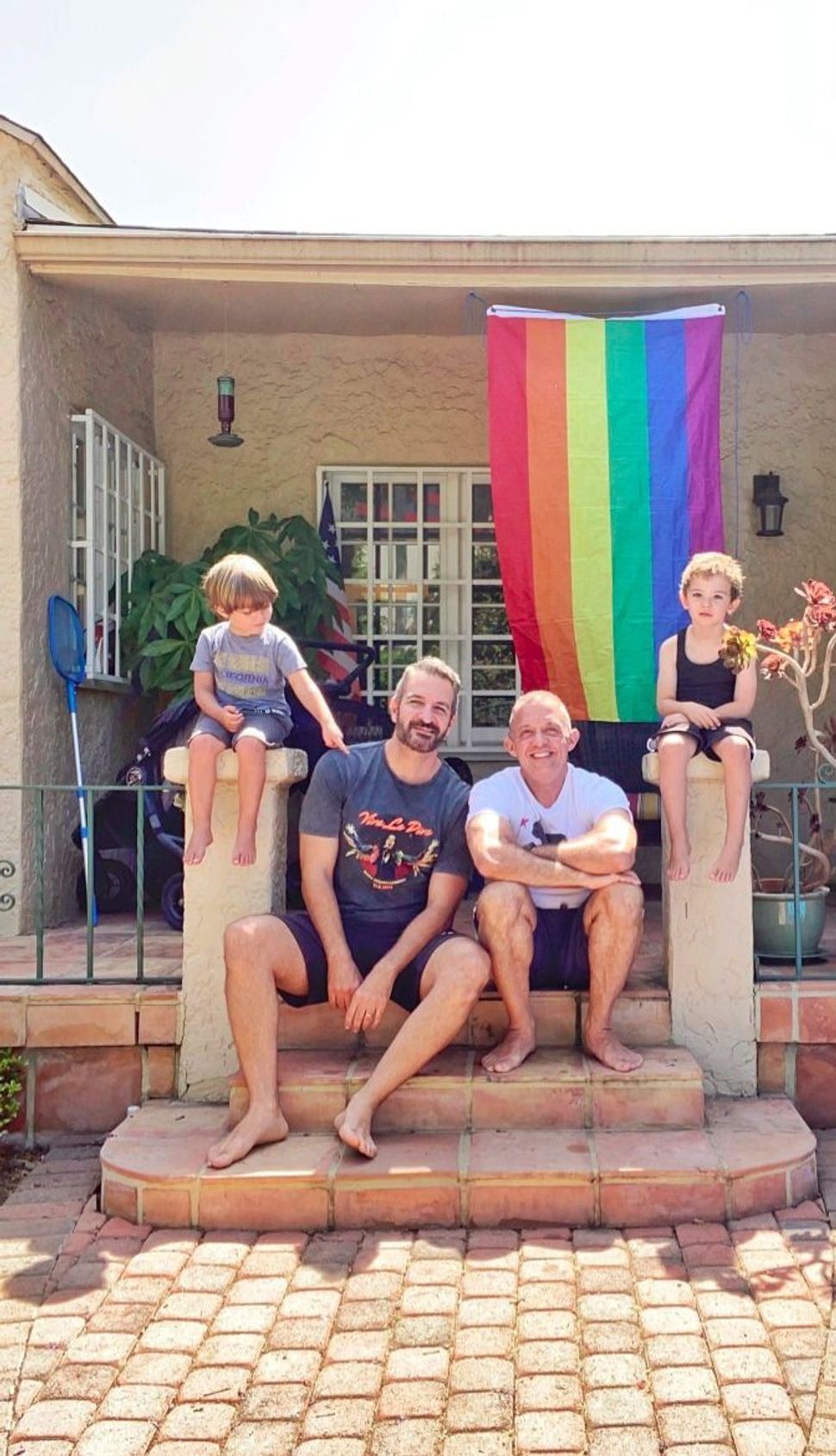 The couple behind Daddy Squared with their two sons. Image by Yanir Dekel

Yanir Dekel and Alex Maghen have a secret for parents who want to survive quarantine — it’s called couples therapy.

“Even if you think your relationship is flawless, do it now,” said Maghen, half of the pair behind Daddy Squared, a blog and podcast tackling the down-and-dirty of gay parenting. Since 2018 Dekel, a web designer, and Maghen, a media executive, have deliberated with experts and dispensed hot takes on everything from surrogacy to dad shaming to (you guessed it), couples therapy. And quarantine puts parents everywhere to the test, they’re staying (extremely) candid and using their time at home to explore the pandemic experience of gay fathers across America.

Dekel and Maghen called me from Los Angeles, where they’re quarantining with two kids who can’t sit still through dinner. We laughed so loudly while talking about work-life balance and kids who Zoom-bomb that my actual boyfriend Zoom-bombed us to say I was disrupting his work-life balance (such is life in quarantine).

I cut that part out of the interview, and the rest has been edited for length and clarity.

Irene Katz Connelly: So how are you guys holding up?

Yanir Dekel: It’s like a roller coaster. Some days we’re exhausted, and some days we’re OK. We’re at a stage with our kids where they’re literally at the height of their energy — they’re running around and jumping all the time. They can’t even sit at dinner: our son Adam will take a bite, walk around the table, come back, take a bite.

Alex Maghen: The first day of the official lockdown, we woke up and it was raining inside. In Los Angeles, that’s very traumatic. And then all the power went out, so there was this sense that it was truly the end of civilization. But I also feel it’s really important to count our blessings. We have a house with an enclosed yard, so our kids can run around outside. There are so many people locked up in an apartment with their kids all day long, and that is beyond our comprehension. Especially if you’re working.

Alex: Our kids are pretty good, but they occasionally Zoom-bomb us. I was in a work meeting with a bunch of very important people from my company, when my son Ben came in, stomped up to the table, and said “LOOK. What is Madonna’s middle name?” I couldn’t even remember, which is shameful —

Yan: He came to the wrong parent, because I would have said, “Louise. Now go away.”

Alex: But it was alright because there were a few entertainment executives on the call, of whom knew that it was Louise. They told me they were going to take my gay card away.

What do your kids get up to while you work?

Yan: Well, they used to only get the iPad for one hour every day, but we don’t really have a choice now. In the morning it’s like, “Here’s your iPad. Let Siri take care of you.”

Alex: Yeah, our children are being raised by Siri. And she’s lovely, she’s infinitely patient. By the way she’s not Jewish. I know because they asked, “Siri are you Jewish?” She answered something like, “No I don’t have a religion because I’m a non-corporeal being.” But if you told my mother that, she’d say it’s not an excuse.

They do have a lot more screen time than we would otherwise feel comfortable with, but they’re old enough to call their friends they used to be in class with, and there’s some socializing that comes with their multiplayer games. They get some value out of it, and we get some quiet.

Yan: There’s some guilt, but we’re pushing it down.

Do you think the pandemic will have an effect on screen time shaming in the parenting community?

Alex: Yes, I’ve seen it. The holier-than-thou aspect has dropped dramatically. People are like, “Yeah, we gave our kids Ding Dongs for breakfast and then a healthy Ding Dong lunch between iPad usages.” There’s an overall sense that there’s only so much parental excellence you can achieve right now. 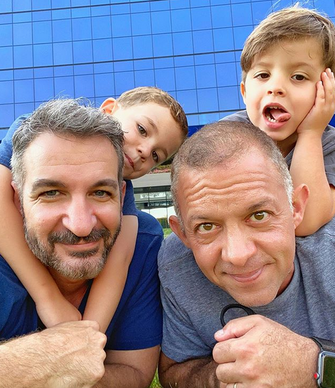 Taking a break from the iPad for an outdoor stroll. Image by Yanir Dekel

You guys talk to dads all the time. What are the top concerns they’re raising right now?

Yan: What I hear from other parents is that what happens at this age matters so much. There’s a danger that after staying at home so long without seeing anyone else, they lose interest in overall interactions. They’d rather watch TV. When the rules were relaxed in Los Angeles and we started going out with our kids, they didn’t even want to leave the house. We had to really start spinning the wheel all over again.

Alex: They’re becoming enclosed in their little worlds, at a time when what you want the most is to expose them to the huge world outside. I think that’s what worries most parents we talked to.

Is there a solution to that problem?

Alex: Well, having little social circles. A month ago we talked to the parents of one kid our sons are friends with and started having isolated playdates. I have to tell that what it reminds me of, in this twisted way, is how people used to talk about sexuality in the ‘90s and 2000s. It’s not just who you had sex with, it’s who they had sex with.

Alex: It’s like, how do we know you’re not having coffee with an “undesirable?”

What are the things you just can’t recreate for your kids right now?

Alex: I have to say, my childhood was super Jewy. Not religious at all, but very tied to tradition and community and culture, and it’s been so important that my kids have that same experience. [That’s why we] send them to Jewish day school. But one of the things I’ve realized is that 95% of Judaism is community. It’s being in a group. And all the sudden, there is no group, so Judaism stops having as much joy. The kids don’t have that right now, and it’s a little heartbreaking for me.

Have you been trying to “do Jewish” at all at home?

Alex: To be honest, not nearly enough of what we could do. But we light Shabbos candles and we are super Jewy. I complain about everything. 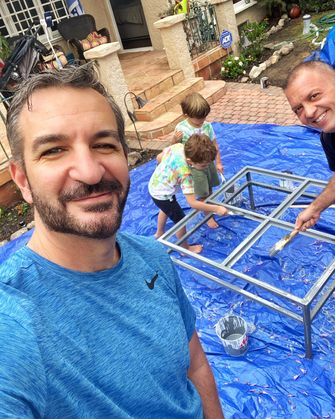 A quarantine-era outdoor art project which Dekel said involved ten minutes of painting and an hour of removing paint from the kids’ bodies. Image by Yanir Dekel

During the pandemic, you adapted your podcast to spotlight different gay fathers with “essential” jobs. How did that come about?

What was the most unconventional essential job you uncovered?

Alex: The booze guy, the guy who stocks the shelves in the liquor stores. I just thought there was something very special about the fact that, whether it’s healthy or not, people need this right now. And he’s going to stock those shelves for them.

Yan: And he told us that every day is like New Year’s Eve.

What did you guys get out of this season of Daddy Squared?

Alex: In the thirty days my husband produced this, we saw this incredible variety of experiences in gay parenting. One thing we learned is that gay dads aren’t all media executives and fabulous hair dressers — although I’m sure there are many fabulous hairdressers.

Alex: We interviewed gay men from Arizona, from Ohio, who are living open gay dad lives in places where those of us in the coastal “bubble” think “Oh, you couldn’t possibly, they’ll kill you.” That’s not to say there isn’t policy or even over-arching negativity towards gay dads, but people are accepted and embraced by families and friends. We never see that — it’s assumed that if a state has nasty laws against gays, that state is full of nasty people who hate gays. The distinction is really important, because if we are going to overcome prejudice, we will do it better from the ground up than from the top town.

Q&A: a pair of podcasting dads on parenting through the pandemic