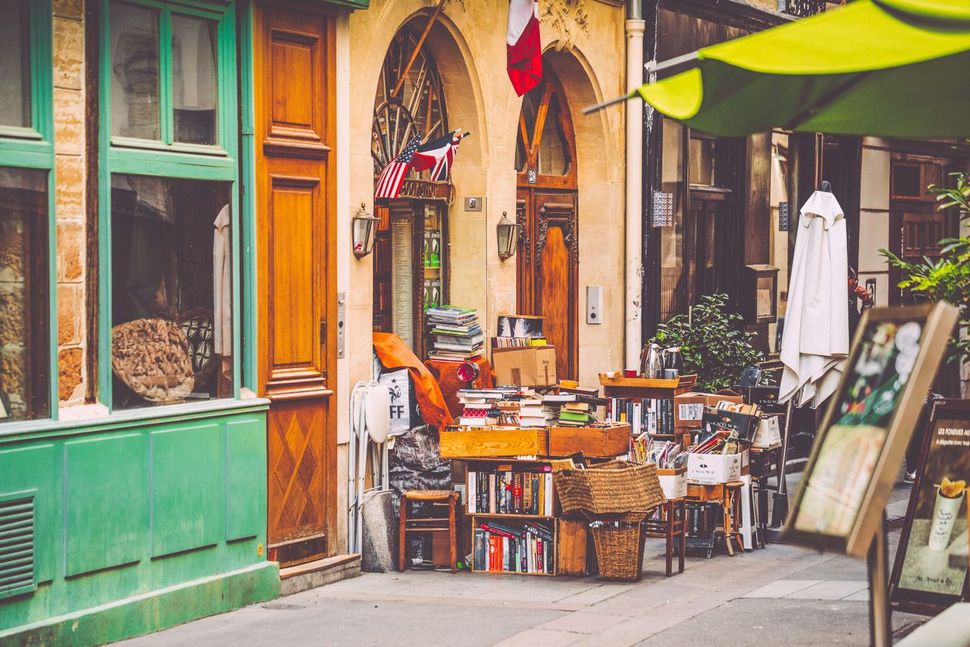 Books for sale in the Latin Quarter. Image by iStock

Those are three places Forward staffers will not be exploring this summer — except through the pages of the books stacked on our shelves.

In this unprecedented era of staying at home, it’s possible to be a virtual tourist in ways we never envisioned before. With a click of your mouse, you can now browse the collections of brand-name museums, traipse through cobbled streets, and watch from afar as endangered species hatch their young.

But right now, we’re soothing our wanderlust the same way we escaped subway rides, waiting rooms, and rainy days long before COVID-19 meant anything to us: that’s right, with books.

If you, like many of us, have seen summer plans cancelled or curtailed, you’re probably in the market for reading that exudes atmosphere, that plucks you out of your quarantine pod and deposits you somewhere you’ve never been — and we have plenty to recommend. Forward staffers huddled (virtually) and rounded up the literary destinations that stick with us. From locales truly enviable to those less so (high school theater class, anyone?), here are some of the places we’re traveling while stuck at home.

The book: “A Walk Through Wales”

Our reader says: I’ve been thinking, recently, about a vacation my parents and I took in England in 2018, walking 100 miles of the Cornwall coastline. The days were all different, as the landscape changed around us, but they were also comfortingly similar: We walked, ate, drank Scotch, and crept into bed at an hour that, at home in New York, I would find unconscionably early. Now that such a vacation seems like a distant fantasy, the memory of those repetitive, exhausting, glorious days is a respite, one that in May drew me to read the recently deceased New Yorker writer Anthony Bailey’s “A Walk Through Wales.” For those also itching to regain a sense of the world’s beauty and vastness, it’s an absolute treat. “In the spring, the world seemed to be comprehensively thawing,” the book begins. “It was going to be the warmest, driest summer in years. And as the glaciers dripped and the seas expanded and people in long-frozen Eastern European states felt the almost unknown thrill of fundamental political change, I felt my annual restlessness.”

The book: “The Night Watchman”

Our reader says: “The Night Watchman” is set on a Native American reservation in rural North Dakota, and the frigid climate plays its own role in spurring a romance and giving one character closure in her troubled relationship with her father. Erdrich’s book was inspired in part by her grandfather who worked as a night watchman at a jewel bearing plant, a glowing ember of economic opportunity for the otherwise disenfranchised reservation featured in her book. Erdrich makes it abundantly clear how important the land is to the Chippewa Indians who live there, and it’s impossible for the reader not to feel its importance, too, as legislative action threatens their land, their families, their senses of home and heritage and so much more.

The book: “Memoirs of a Teenage Amnesiac”

Our reader says: My 12-year-old twins were reading this for the book club they and some friends organized for the summer (yes, I chose this just to brag: my kids are part of a book club with no adults involved!). It’s recommended for ages 14 to 18 — I’m 49.

I’ve been reading middle-school novels since “Wonder,” the amazing tale of the kid with the disfigured face that became a Julia Roberts movie. I find them perfect for my tired working-mom self: all plot and character, with short chapters that give a satisfying jolt of accomplishment even if you only get short bursts of reading time. They’re excellent expressions of the journalist’s credo: show, don’t tell — none of the literary self-indulgence of the Serious Adult Novels I’m supposed to read.

“Memoirs” had me at the first chapter: Zevin’s “Naomi” has a clear, compelling voice, the supporting characters are people I wish I’d gone to high school with, and there’s a nice balance of action and emotion. It’s about trauma, and reinvention, and friendship and parenting and love — but it doesn’t dwell on any of these things, they’re just there for you to think about, or not.

The book: “Call Me By Your Name”

Our reader says: It’s hard for me to imagine a book more transportive. Set in the Italian countryside, Aciman’s evocative descriptions of cool swimming holes and nights spent flirting and dancing and smoking cigarettes make the heavy summer heat palpable. The story follows Elio, a precocious teenage boy, as he tries to piece together his feelings for his father’s assistant, Oliver, and to understand love writ large in the grandiose way only a teenager can. If you’ve seen the 2017 movie version (starring Timothée Chalamet, everyone’s heartthrob) you already know the aesthetic, but the book is sexier and deeper to compensate for its lack of sweeping shots of the Mediterranean. It’s the perfect book to bring you both the Italian vacation and the sensuality you may be missing in coronavirus.

The book: “The Mirror and the Light”

Our reader says: This doorstopper is the last installment of Mantel’s trilogy about Thomas Cromwell, the political upstart who made, and ultimately was unmade by, the reign of England’s infamous King Henry VIII. Mantel’s piping hot take on Tudor-era political drama — she recasts Cromwell, long labelled a villain, as a hero with an idealistic religious agenda — makes her magnum opus a refreshing read for history buffs. But it’s her intimate depictions of the rhythms of early modern life, from bread-making to bloodletting, that make “The Mirror and the Light” an excellent pick for anyone seeking immersion in a vastly different time.

The book: “Memoirs of a Geisha” by Arthur Golden

Our reader says: Nominated as one of America’s best-loved novels by PBS, “Memoirs of a Geisha” tells the story of Chiyo Sakamoto, a young girl from a fishing village, who’s sold as a child by her impoverished father and placed in a house for geisha in Kyoto, Japan. There she becomes the personal maid to Hatsumomo, one of Kyoto’s most popular geisha. Chiyo is trained in the arts of entertaining, singing, dancing and performing tea ceremonies. But then Hatsumomo becomes jealous of Chiyo’s beauty and begins to treat her so harshly that Chiyo begins to plan her escape.

Although this book was published over 20 years ago, it’s still one of the best novels I’ve read since then — and the only one I got my teenage sons to finish

Our reader says: In this National Book Award winner, Choi probes the id and ego of that most overemotional of creatures: The adolescent theater nerd. Tracking two performing arts school freshmen, Sarah and David, it’s a tale of nervy first love, blurred student-teacher boundaries and the questionable performances we all cycle through, onstage and off. Think “Fame,” but raw and gutting and always aware of the absurdity of high schoolers on the lookout for even more drama. Halfway through the narrative does a surprising heel turn, challenging the vagaries of memory and confronting the act of life’s many missed cues and subtle curses. It’s not just for lapsed stagedoor kids — but it might help to have been one.

The book: “The Wind-Up Bird Chronicle

Our reader says: Murakami’s books are mostly set in his native Japan, often in Tokyo, so they’re plenty far away, but more importantly, his books build atmospheric worlds with uncanny touches of magical realism that draw you in. Many of them feel like walking through dreams — unsettling, labyrinthine, yet still forward-moving. I would recommend nearly any of his novels, but this is the one I usually start people on; the plot is hard to summarize, but follows man’s hunt for his missing cat, told in Murakami’s signature spare style. He also has some signature symbols that come up in many of his books, so feel free to play along on this bingo fans have made.

Our reader says: When I was first introduced to Etgar Keret it was like catching up with an old friend who had fallen out of touch. Keret’s writing style is unique— more conversational than prose— and when a friend suggested the book to me on a lazy summer Shabbat it felt like he was right there in the living room with us telling funny stories from his life in Tel Aviv and from his many travels around the world. I spent the rest of the afternoon laughing out loud and shouting across the room “Hey, let me read this part to you!” The way Keret takes seemingly mundane moments in life and transforms them into life-changing profound ones is the perfect antidote to these pandemic times. Keret proves that you don’t have to be a major celebrity to live a rich, fulfilling life and that there is meaning in every moment you live no matter how ridiculous it may seem.

The book: Sababa: Fresh, Sunny Flavors From My Israeli Kitchen

Our reader says: I cannot stop reading this eye-candy of a cookbook. It’s chock-full of beautiful color photos and accompanied by archival legends of her chosen ingredients and their procurers in the produce stalls of Tel Aviv’s legendary Carmel Market. Of late it’s fashionable to get to know the folks who grow our food, but Sussman takes the trend to another level. I find myself leafing through it in search of my current favorite, her pita recipe, only to be mesmerized by her tales of DIY stove-top pita ovena. As I sit out the spring and summer, wondering when I’ll next see my mother, who lives in Jerusalem, this book offers an authentic sense of cool — or sababa. And a big thanks to my mum, who put it in my suitcase when last we hugged goodbye.