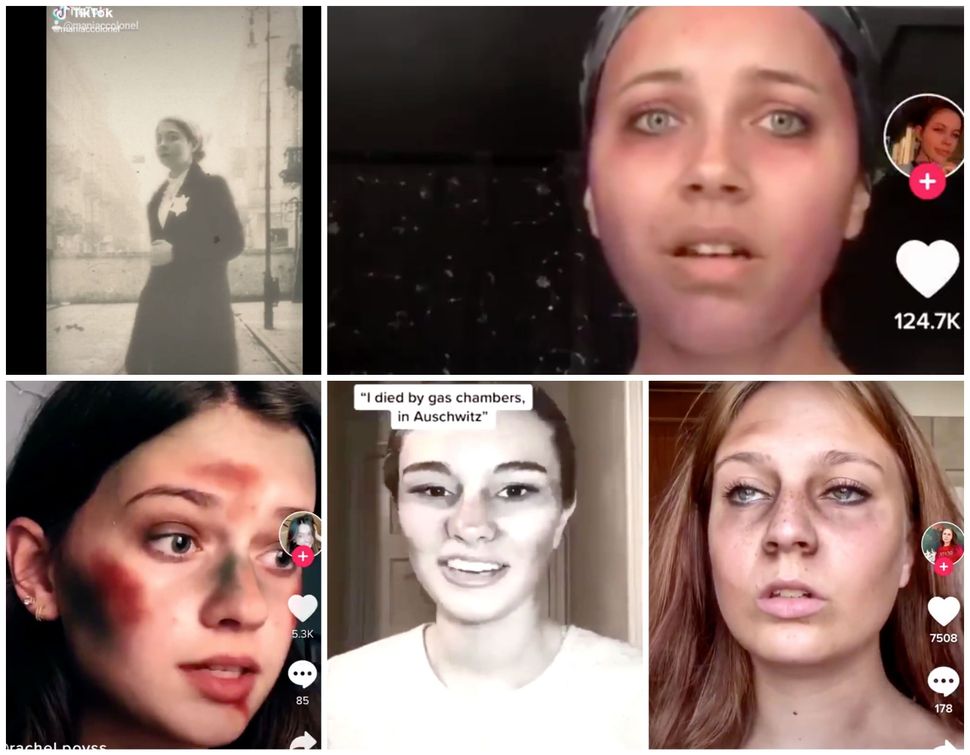 Holocaust victim roleplay is emerging as a trend among teenage actors on the video social media platform TikTok, under the hashtag #holocaustchallenge.

“I was put in Auschwitz camp at 19 with my family,” says TikTok user @thatsnadia in one video, face made up with painted bruises. “We were forced to work, it was painful, exhausting. We were also tortured.”

Some of the users imagine themselves as Holocaust victims in the afterlife. “I died by gas chambers in Auschwitz,” said another, TikTok user @kyla.atkin, her face gleaming ghostly white.

Many of the videos are reactions to acting roleplay prompts, like “Jewish teenager gets to go to the future but gets taken back to the concentration camp,” or “it’s ww2 and a military officer finds a jewish woman hiding in the basement.” Some imagine time travel, being sent back in time to concentration camp, where they are sent to the gas chambers.

“It was December 1943. We thought we were safe, we thought we were hidden,” said TikTok user @cchynaa, staring at the camera. “I remember the screaming and the banging when they found us. I remember the cold, as they walked us through the icy streets, completely naked.” That video received over 50,000 likes.

Some go as far as using European city backgrounds; one person lip syncs, “You make me feel like I’ve been locked out of Heaven,” wearing a striped prisoner’s uniform.

Not everyone is on board with the trend. Twitter user @Mowgli_Lincoln shared a thread of these screenshotted videos, writing: “the holocaust is not some fun little aesthetic for people to dress up for and role play.”