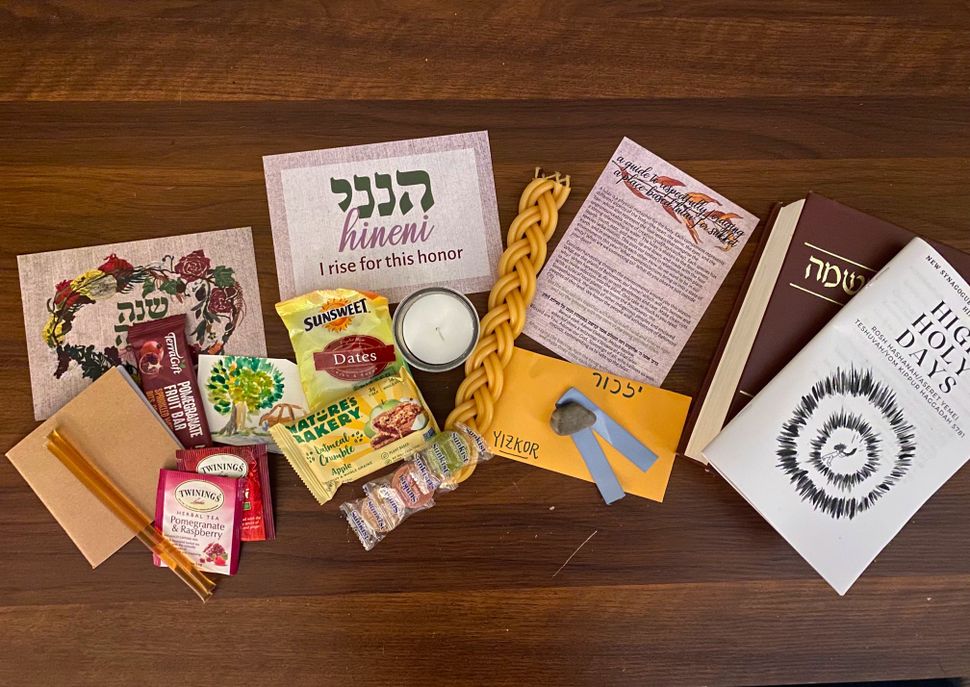 Amy Cohen knew the package was coming. Her synagogue, New York City’s B’nai Jeshurun, had told her to expect some materials to guide her through this year’s slate of virtual High Holiday offerings. Still, when a stylish linen tote bag bearing the synagogue’s logo arrived at her door, she was “moved to tears.”

Inside was a booklet of holiday blessings, a jar of honey, holiday cards designed by a member of the congregation and a template for building “conversation starter dice.” The package even included tea lights reminiscent of the synagogue’s traditional Neilah “parade,” in which children carry tiny candles to the bima before the shofar’s final blast.

“To call it a care package would be an understatement,” Cohen said. 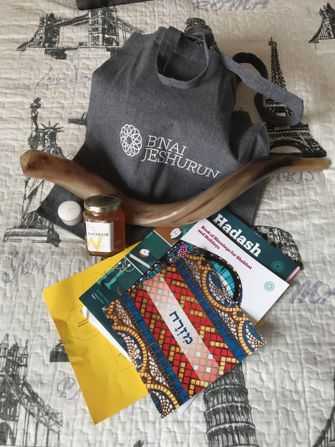 After months of exile from their physical buildings, most Conservative and Reform synagogues have become accustomed to hosting services online. But as the High Holidays approach, rabbis are looking for ways to differentiate at-home observance from an ordinary Zoom Shabbat. B’nai Jeshurun is one of many synagogues distributing gift baskets or “kits” to remind congregants of familiar traditions and equip them for a High Holiday season like no other. It’s a pandemic-era innovation that, rabbis say, just might become a new tradition.

“I wanted something that would put people in the holiday spirit, [let them] know they’re being thought about, and give them the tools they need to create small sanctuaries in their homes,” said Rabbi Ellie Miller of MAKOM, a non-denominational congregation in Morristown, N.J.

The practice of giving small gifts or treats around the High Holidays is hardly new. In normal years, Miller usually hands out seasonal goodies like honey sticks. But this year is different: Months before the High Holidays, rabbis and synagogue staff began asking themselves what their congregants would need to celebrate at home. Momentum grew on a private Facebook group for clergy, where members swapped photos and tips as they bought materials and assembled packages.

Rabbi Sid Schwarz, a senior fellow at Hazon and the project leader of the Clergy Leadership Initiative, said the new practice is widespread among his peers, with synagogues sending home everything from “the standard challah and honey” to objects that will help congregants curate an sanctuary-like “aesthetic and mood” in their homes. 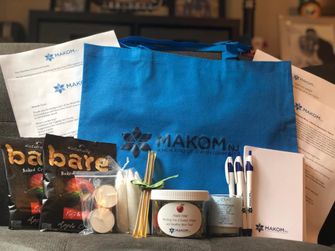 Of course, tote bags and honey jars cost money, and they’re gaining popularity in a year when many synagogues are experiencing tremendous economic insecurity.

“Every synagogue is weighing this,” said Schwarz of the financial burdens gift baskets entail. But at a time when congregants may be feeling distanced from their synagogue, he sees them as a smart allocation of resources. “You have to make some extra efforts, at this point in time, to make people think that it’s worth being part of your synagogue,” he said. “These little touches might be a good investment.”

Miller, who runs MAKOM on what she calls a “shoestring budget,” was able to produce her kits for about five dollars apiece thanks to one “phenomenal helper:” her 13-year-old son, who packaged the candles, wrapped up the honey sticks and assembled the kits.

Rabbi Ariana Katz of Hinenu: The Baltimore Justice Shtiebl, a non-denominational congregation in Baltimore, Md., said the kits’ cost was offset by the money the synagogue is saving by not hosting in-person events, like its traditional oneg on the eve of Rosh Hashanah. “We didn’t have to get a million tiny brownies,” she pointed out. 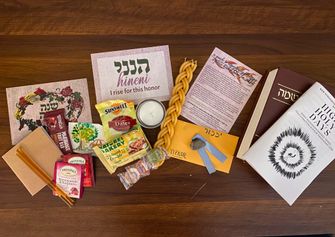 The kit Miller of MAKOM created combines playful and practical elements: besides honey candy and apple chips, her congregants will receive holiday candles (tall ones for those who own candlesticks, and votives for those who don’t), yahrzeit candles and a troubleshooting guide to Zoom services. Kids will get crayons and craft projects to mimic the in-person youth programming they’re missing this year.

For synagogues with large congregations, assembling High Holiday kits can involve complicated logistical planning. In May, staff at Park Avenue Synagogue, a Conservative congregation in New York City, started working with an outside contractor to source and ship the gift baskets making their way to members’ homes. Among the items each package includes an embroidered challah cover, a citron-scented candle and special stationary that congregants will use to complete writing prompts to be assigned during services. 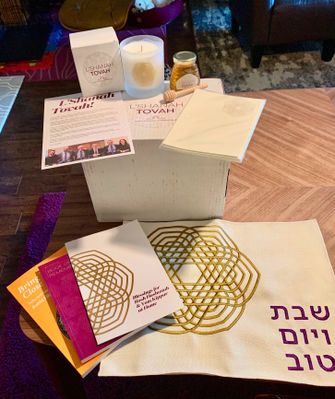 Smaller synagogues have tasked talented congregants with designing High Holiday kits that reflect their particular character. At Hinenu, Katz turned to her congregation of “teachers and punks and artists” for help curating a quirky array of offerings. One congregant designed a floral motif to accompany a printed letter from the synagogue. Another wrote a guide for “respectfully foraging” one’s own lulav. A third contributed an original painting for each box — 135 in total.

Meanwhile, homemade apple cakes make tasty centerpieces to the gift bags distributed by Temple Beth Israel, a Reform congregation in Plattsburgh, N.Y. Rabbi David Kominsky said that a single capable congregant baked 75 of them, one for each family. 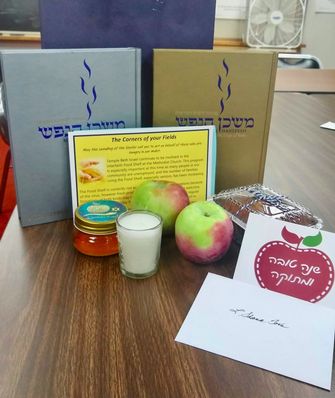 One congregant at Temple Beth Israel in Plattsburgh, N.Y. baked an apple cake for each of the synagogue’s families. Image by Courtesy of Rabbi David Kominsky

Cohen said the box she received from B’nai Jeshurun gave her hope during “during a really dark time,” and other congregants echoed those sentiments. For Sam Klein, who attends Temple Rodef Shalom in Falls Church, Va., picking up a High Holiday gift basket from the synagogue was a chance to reconnect with clergy.

“You couldn’t see their smiling faces behind the masks, but you could read their engaging eyes,” he said.

Most rabbis are unsure whether High Holiday kits will stick around. If congregations are able to meet in person next year, they may be less necessary.

But Katz said the exercise has given her a new appreciation for the way physical objects can heighten the experience of Jewish rituals. She’s already brainstorming new ways to commemorate milestone events in her congregation, from sparkling grape juice for new members to candles on yahrzeit anniversaries.

“I think there is something about receiving gifts from the community,” she said. “The stuff of life, the artifacts, make [Judaism] feel realer.”