‘During Unesaneh Tokef, we all wept’: How we worshipped together in person 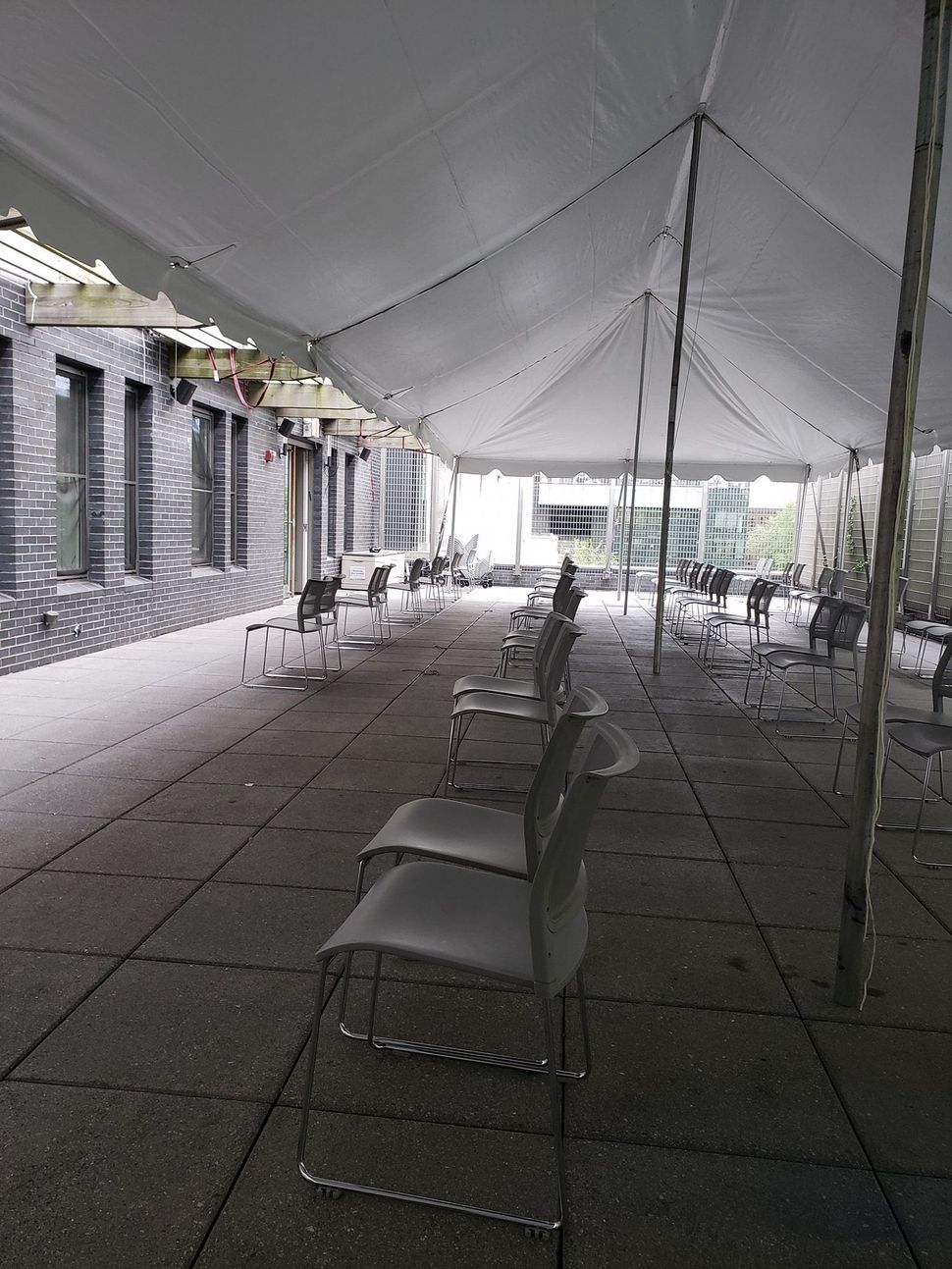 The pandemic forced many Jewish communities to hold their services online this year, but Orthodox synagogues had to find a way to gather in person.

To capture the experience of those Jews trying to balance safety and spirituality, in-person, we asked readers to tell us more about their experiences. How did people feel, sitting in those seats? What did going to shul this year mean for them? We felt compelled to collect these historic experiences, for the sake of the record.

Some readers shared uplifting moments, some shared fears about lack of social distancing, some raised questions that we may return to, in years to come, even once the pandemic has passed: Are there lessons to be learned for future years, about what works and what doesn’t? Shorter services, more intimate gatherings, outdoor components?

The images of tents filled with Jewish families wearing coats to ward off the chill, the massive sanctuaries dotted with worshippers wrapped in prayer shawls — each huddling, as if to protect themselves from both a virus and an evil decree — these scenes will one day be written about in history books.

But for now, these moments make up our daily lives.

’Everything that’s happened this year made Rosh Hashanah even more powerful.’

“I was in a synagogue that split its reduced attendance between two locations. Masks were required, which was difficult at first, but I found it manageable. The masks themselves drove home the urgency of our prayers, and there was a communal aspect to it that I don’t feel as strongly outdoors or on Zoom. During Unesaneh Tokef, we all wept together.” Mari, Cedarhurst, N.Y.

“I attended in person services this year. They were held in a hotel event space that was half inside and half outside, socially distant and masks required. Everything that’s happened this year made Rosh Hashanah even more powerful. There were so many tears and everybody was just so present. It was really a moment I think I’ll never forget.” Maayan, Chicago, Ill.

“I loved davening this year. I was able to focus — it was short, sweet, grounded. As much as I missed having my kids in shul, this year because kids were not allowed, I was able to just focus. (My husband and I took shifts.) There was no stress of them coming in and out of shul and disturbing the service. Two hours is so much more manageable than the long services we are used to.” Shana Frydman, Great Neck, N.Y.

“As someone who LOVES going to shul and davening with a minyan, it was such a treat to be back (for the first time since Purim). I was lucky that my husband arranged a full-length yeshiva-style minyan for his kollel, so I didn’t even have to compromise with an abbreviated service which was what all the local shuls did (to accommodate multiple minyanim with adequate space between participants). It was exhilarating!” Ayelet, Boca Raton, Fla.

“My father is the rabbi of an Upper West Side shul, and I’ve been coming for high holidays with my family from Jersey for the past ten years. But this year was incredible with the entire street closed off and my father in white blowing the shofar with passersby stopping to stare. The sounds filled up the entire block.” Tova Herskovitz, New York, N.Y.

“While it was nice to be around people, a significant aspect of the holiday was missing. There was little sense of community, even in person. The regality of Rosh Hashanah didn’t hit me in the way it usually does. It was just lacking overall.” Zachary Beer, Woodmere, N.Y.

“I liked just being back at my synagogue and seeing friendly faces. It was quieter and more respectful, as all were socially distanced, so no whispers while we prayed, and of course no unnecessary lingering afterwards. Just great smiles and well wishes.” Haina Just-Michael, New York, N.Y.

“It was my first time back in a religious setting since Purim. Eleven families. Intimate davening. All substance. Every detail perfectly addressed. Amazing chazzan (cantor). Perfect Torah reading. Inspiring shofar. Can’t imagine going back to a large impersonal synagogue, but I understand this might be a one-time happening.” Hannah, Hollywood, Fla.

‘I was the only one wearing a mask’

“I really enjoyed davening outside in the tent. It wasn’t crowded, the weather was perfect, and it seemed like the best option. Unfortunately, most of the women were not wearing masks (my family was maybe one of two others out of ten or so) even though most of the men were. I’m not sure why that is; maybe the men attend minyanim more often than women and are more accustomed to the practice? I wish the shul would’ve made an announcement about mask-wearing to everyone.” Aleah Gornbein, Baltimore, Md.

“The davening was very nice, but it was too normal for me. The chairs were spaced and everyone was wearing masks, but I felt that the davening should have been shortened somewhat. Less singing, less speeches. I did not feel comfortable staying indoors with so many people for so close to five hours.” S., Boca Raton, Fla.

“We recently moved to Boro Park. The lack of connection with reality as far as Covid goes really bothers me. We went to a minyan in a hall that was rented out. I would guess 100 women and 300 men. I was the only one wearing a mask. I walked in without it and sat down, seriously deliberating putting it on or not. It’s uncomfortable being the only one and standing out. But it was the right thing to do. So I put it on. I feel really weird about the whole thing. It’s hard to be here given my value and appreciation for menschlichkeit.” Sara, Brooklyn, N.Y.

“It wasn’t crowded but definitely not six feet apart. Zero masks, most people didn’t have an issue with it. The rabbi said we shouldn’t give hands to each other, as is the custom. We even shared plates of herring at the kiddush. I had the virus already back in March, and currently still have antibodies, and had an entire table just me and my family, so I felt okay. It was the best option I had. ‘Who will live and who will die, who by plague’ definitely took on extra meaning this year. Unfortunately we New York Jews in particular lost so many in the past year.” Naftuly, Rockland County, N.Y.

‘There’s something to be said for davening in nature’

“We had an absolutely beautiful and incredibly spacious outdoor tent set up in the field next to our shul. There’s a pond with geese in front, and trees all around. I took my chair right outside and sat in the sunshine. A woman in front of me commented that she felt like she was davening in Uman, Ukraine, out in a tent in the field. The davening was beautiful and spiritual, and so very meaningful this year in a whole new way. I found myself focusing on different words that I hadn’t noticed before, such as “who by plague”, and “our Father, our King, keep plague from our midst…” Chana Neuberger, Baltimore, Md.

“The minyan I attended was held outdoors in a tent, and was very windy and cold sitting in the tent. We ended up having to wear coats, boots and gloves. I did miss my usual indoor shul, but there was something to be said for the relatively quick davening (they didn’t cut anything but did make sure not to stretch anything out), the beauty of the outdoors, etc. I really really miss my usual shul’s service, but sadly my usual shul is not social distancing.” Hannah G.

“I enjoyed being outdoors at one of the few outdoor minyanim in Lakewood (I walked a bit over two miles in each direction on both days). There’s something to be said for davening while in nature. The davening was long and the sparse crowd didn’t allow for spirited singing. It was cool under the shade of the canopy and toasty sitting in the sun (got a tan). Most Lakewood area shuls carried on as usual with indoor, full-capacity minyanim with no masking or social distancing. Winter is coming. God help us.” Moshe, Lakewood, N.J.

“I attended services in a parking lot beneath the kind of tent you ordinarily associate with the circus. It was chilly underneath the tent, and I heard afterward that people at the 7 am service wore their heaviest winter coats, hats, and gloves. The seats were separated by six feet or more, but family units got to sit together.

I found that with sitting outside in nature it was easier than ever to get lost in my thoughts and to focus on the themes of the day. These services as we had them were the best they could have been. After the second day, I walked through the aisles wishing each person a Shana Tova, greeting them as I always have in our warm community. One elderly man, whom I hadn’t seen in person since March, told me proudly from beneath his mask, “Since I saw you last, I had two great-grandchildren.” I could tell he was smiling. As a result, I went home with my own smile, too.” Danny Groner, Bronx, N.Y.

‘During Unesaneh Tokef, we all wept’: How we worshipped together in person