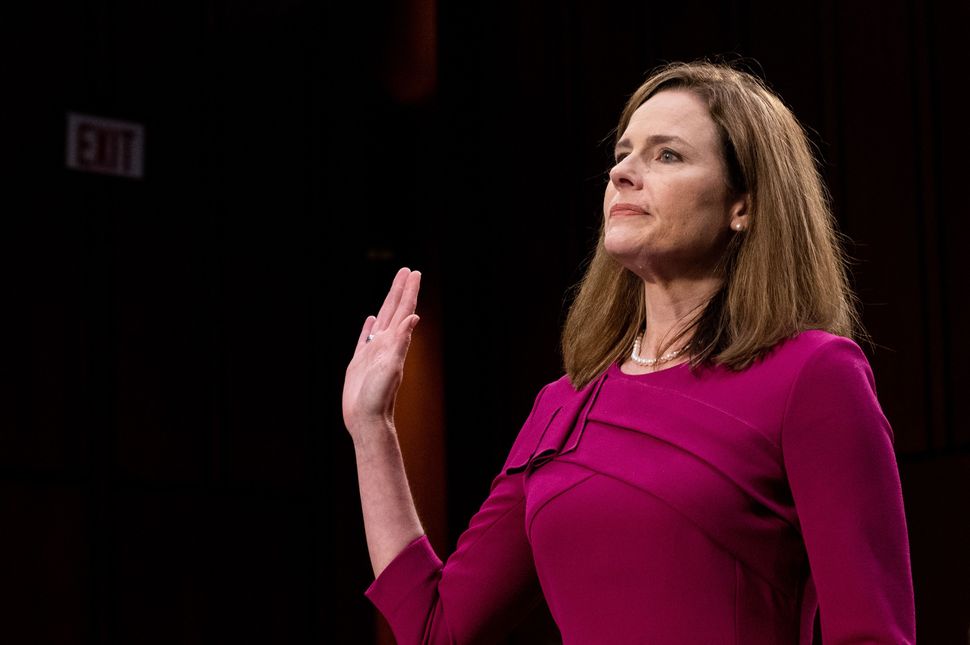 “I believe in the power of prayer,” Judge Amy Coney Barrett said during her Senate confirmation hearings this week, “and it has been uplifting to hear that so many people are praying for me.”

Barrett is a passionate Catholic whose faith has been the subject of much debate since President Trump nominated her to replace Ruth Bader Ginsberg on the Supreme Court.

The faithful of many religions embraced her words, uttered at the end of this first of four days of intense questioning. An editor-at-large of the National Review, said they were a “contribution to our nation” because they affirmed prayer in a culture that sometimes denigrates it.

Many Jews are uncomfortable with such displays of faith in the public arena. Indeed, in 2017, Sen. Dianne Feinstein, a Democrat of California, argued that Barrett should not be confirmed for a different judgeship because her personal religious beliefs would interfere with her rulings. “The dogma lives loudly within you, and that’s of concern,” Feinstein, who is Jewish, said at the time.

Yet the Jewish perspective on prayer and its powers is more varied and nuanced than Feinstein’s comments and conventional wisdom would indicate.

To dig into some of those complications, The Forward asked a range of rabbis for their reactions to Coney Barrett’s words. Some were thrilled with what she said. Others privately cherish the same sentiments, but were uneasy with the public context in which they were expressed.

The spiritual leader of Kehilat Rayim Ahuvim, a Modern Orthodox community in Manhattan, Rabbi Adam Mintz is also the director of 929 English, a project that promotes the daily study of a chapter of Tanakh.

When I hear about the “power of prayer,” I immediately think of the platitude that politicians often offer after a tragedy: “Our thoughts and prayers are with you.” Today, this phrase is criticized; victims of tragedy turn the phrase on its head: “We don’t want your thoughts and prayers. We want action.”

Each week in synagogue, I lead ”misheberach” prayers for others: those who are not well, for the safety of Israeli and American soldiers, and people who are suffering around the world. Sometimes these prayers also feel like platitudes, but I try to personalize them, keeping in mind the members in our community who have family in the IDF, or names of loved ones who are struggling.

But to me, that’s not enough. I need to strive to also take action. Visiting or calling people who are ill, or even dropping everything and being present with people who are in immediate need after a tragedy. Rabbi Dr. Abraham Heschel said it best: “Pray with your feet.” Perhaps this is also an overused sentiment. And yet this “platitude” feels more aligned with the kind of prayers I want to manifest in this country: prayer that leads to action.

Raba Sara Hurwitz is co-Founder and President of Maharat‭, ‬the first institution to ordain Orthodox women as clergy‭; also a spiritual leader at the Hebrew Institute of Riverdale, in the Bronx‭.

Prayer for me isn’t just a conversation or even a list of requests for God. The act of prayer in Hebrew is “Lehitpallel.” Two ideas are expressed within this one word, “lehit” is reflexive, and “pillel” means to “judge” or “weigh.”

Prayer is therefore also an expression of “weighing” what I truly need from God. So when we pray, we are asking God to help us maximize our personal talents and successes to utilize all the blessings we receive for the absolute best, for ourselves, our family and the world at large.

Originally from London, Rabbi Lawrence Hajioff is the educational director of Birthright Israel Alumni in Manhattan. He is also on the faculty faculty of Stern College for Women at Yeshiva University.

Judge Amy Coney Barrett is to be commended for her statement, “I believe in the power of prayer. It’s something that should come natural to all of us.” She went on to say, “It has been uplifting to hear that so many people are praying for me.” Again, it’s only natural that a person should feel good knowing that people care about them, and it is only natural that people who are praying should feel good knowing that they care about others.

But I would keep in mind the words of Rav Kook: “Prayer does not seek to change anything in God’s nature … every worshipper should understand that prayer is a miraculous principle and established by God in the world to allow His creatures to attain all types of perfection and especially the ethical perfection to which it gives rise. But it does not, heaven forbid, regulate God.”

So what does prayer do? It can make you feel good and it can make others feel good. What it does for God? Only God knows!

For 40 years, Rabbi Mitchell Wohlberg has served as the leader of Beth Tfiloh in Baltimore. He is also the author of books including “Pulpit Power.”

The potency of prayer is that it can provide a direct connection to the Divine. It’s a song and we all need a soul song. As a spiritual person, prayer invigorates me, reorients me, and fills my heart with passionate fire for love and justice.

On the other hand, prayer should not permeate the divisive realms of governments, especially a democratic government that represents a population with great diversity. It should not be invoked in policy matters, nor in matters of great import before courts and judges. Let’s keep prayer within communities of faith and in spiritual moments away from the all-too-toxic halls of political power where they can be used to oppress rather than uplift others.

Rabbi Dr. Shmuly Yanklowitz is the president and dean of Valley Beit Midrash in Phoenix, as well as founder and president of Uri L’Tzedek, an Orthodox social justice organization.

To mention the power of prayer during Supreme Court confirmation hearings is to bring one’s personal faith into the public sphere. Many liberals want professional and public spaces be completely secular. For Judge Barret, talking about one’s personal belief can, and perhaps should, be brought into that space.

In her statement she is also adroitly addressing possible concerns about her Catholicism. By referencing prayer but not Catholicism, she is actively banishing it from the conversation. Through her omission, she is messaging that the strictures, values and worldview of the Catholic Church are irrelevant to her role as judge and as interpreter of the Constitution. That while she may be religious, she is not Catholic, at least not her professional capacity as a judge.

The upshot is that faith belongs in the public and professional sphere, while religion – of the Establishment, capital-R variety – does not.

Personally, I agree with that message. Talking about God and prayer brings God and faith into our lives and models that it’s okay to have faith, which for me as a rabbi is a good thing.

But in the end, we needed to hear an explicit statement from Judge Barrett that her Catholicism will not impact her role as judge. By signaling this but not saying so explicitly, she leaves one wondering whether this message was the one she intended to be heard, but it is not, in fact, true. Only time will tell.

As the President and Rosh HaYeshiva of Yeshivat Chovevei Torah Rabbinical School, Rabbi Dov Linzer is also recognized as a major Torah scholar, and the primary creator of the school’s curriculum.