What the curse of Eve teaches us about post-partum motherhood 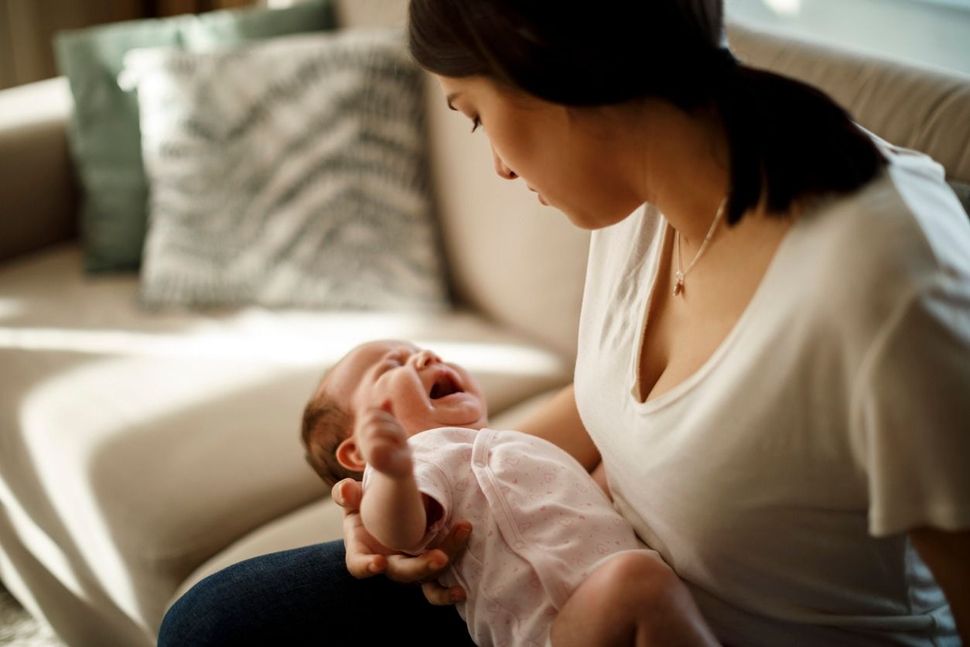 Mother and newborn Image by iStock

At no point in the two hour class on breastfeeding did the instructor ever mention the word “cluster-feeding.” She never mentioned that on the second night of my son’s life, he would feed all night long. And then again a few nights later. Some nights I would catch a break from 2:30 am to 4:00 am, but this barely helped: waking up at 4:00 am after an hour and a half of sleep felt like torture. The exhaustion was torture. I was being tortured by my newborn, and I was not alright.

“I will make most severe your pangs in childbearing; In pain shall you bear children.” This is the curse of Eve, in Genesis 3., which we read about in this week’s Torah reading. The primordial couple, lured by the wily snake, had eaten the fruit that God forbade to them. Pain in childbirth, the Torah records, is the first part of Eve’s punishment.

For years I had taught women that the curse of Eve is just that: A curse. Not a commandment to be observed and treasured, but a curse to rise up against and overcome. “Take the epidural!” I would encourage. There is no religious obligation to suffer through labor.

I took the epidural. But I didn’t know the extent of the curse.

We don’t really talk about how hard it is. As if for fear that, if people found out, the human race would be over because women would simply refuse to bear children. Or at the very least, women would not breastfeed. So instead we lie: “My son is amazing!” “We’re so grateful!” “He slept through his own bris — such a chill baby!”

But over text message, to the few friends I knew could handle the truth: “How am I supposed to survive this?” “Am I supposed to love this thing that tortures me?” “This is not sustainable!”

And to my husband, the darkest truths of all: The cursing and the rage. The pain, the blood, the helplessness as my optimistic personality and my sense of self-worth dripped away into nihilism, or worse. Before the baby, my job had been leading a thriving Orthodox synagogue, where I taught Torah and enriched people’s religious lives. Now, my only job in the world was breastfeeding. I did that job eighteen hours a day. It required two hands and two eyes and two breasts and often a pump and pain and no thinking. My baby did not care about my Torah learning or my (under normal circumstances) exceptional executive functioning or even my cooking. There was nothing about me that mattered anymore—just my beleaguered, exhausted body.

Nobody had ever objectified me like my own newborn.

A mom-friend told me that every day in the shower she would count down the days until her son would hit twelve weeks— the end of the proverbial “fourth trimester,” when babies turn a corner and become more compatible with life. I didn’t think I was going to make it to twelve weeks. Can you even survive twelve weeks without sleep? With raging hormones and perineal stitches that burn with any movement? It’s okay, I said to myself, my husband would be a great father to our child even if I didn’t make it. I wasn’t necessary anyways; perhaps, I would sometimes half-joke, I could just leave my breasts behind!

The CDC estimates that between 10-20% of women experience postpartum depression. Perhaps the other 80-90% are experiencing its fraternal twin: postpartum anxiety. Or, like me, postpartum rage. I have no idea if any physician actually reads those diagnostic screenings that they make you fill out. Sometimes, I wonder if the only women ever diagnosed with these conditions are the ones who somehow manage to pull it together and find the energy, after spending eighteen hours of their day breastfeeding, to get the astronomically expensive, not-covered-by-insurance mental health care that they desperately need. Those women are heroes.

I wasn’t one of them. But about a month in, my husband started taking over one of the night feeds so that I could get four straight hours of sleep, and at three months our baby started sleeping more through the night. And so slowly, slowly, I began to heal.

“I will make most severe your pangs in childbearing; In pain shall you bear children.”

Pain is an accurate but limiting translation, and this rendering perhaps leads people to believe that the main suffering of childbearing is the physical process of labor itself. Don’t get me wrong, labor is no small thing. But the Hebrew word ‘etzev’ is also connected with the idea of sadness. “In sadness shall you bear children.” The curse is not just the labor, but also (and in a world of epidurals, moreover) the brutal cocktail of postpartum hormones, a traumatized body, exhaustion and breastfeeding. The curse is the sadness. The depression.

Let me be clear: Our baby could not have been more wanted. Through a year of infertility treatments and 39 weeks of pregnancy, we dreamed about meeting him. Who would he look like? What kind of person will he be? Will he inherit your eyelashes (yes) and my hair (too soon to tell)? In early ultrasounds, he was sucking his thumb. At 20 weeks we learned he has a disproportionately large head— that’s where he keeps his disproportionately large brain! And he defiantly refused to turn around in the womb even though the ultrasound tech was poking him. I knew the early days with him would be exhausting, but I felt confident that they couldn’t be more exhausting than any of the exhausting things I’d done before in my life.

Everyone describes those first days as a time of magic and gratitude, settling in as your family grows and you get to know your new life. A time to celebrate, even if it’s busy and tiring and a little bit intimidating as you learn new skills of diapering and bathing and putting to sleep. But in the first months of my own baby’s life, all I could think about was: Eve was cursed. It turns out that no matter how much you wanted your baby, the curse stands. “In sadness shall you bear children.”

But once you know it’s a curse, that’s the key. This recognition is sobering but also empowering—for getting through it yourself, and perhaps for helping other new mothers do so, too.

I worked for a congregation for nearly two years before I had my baby. Our community was large, young and prolific. Sometimes four babies would be born in a single week. I would call parents after the birth of their babies, speak to them at the bris or simhat bat and bring them a homemade meal, but that was the extent of the support I offered. That is the rabbinic standard of care. But now I know that it’s not enough — not even close.

I didn’t know that the hardest time was four weeks out. I didn’t know that the call should start: “Mazal tov on your baby! The first weeks of life are really, really hard. Do you mind if I check in on you?” And, if the answer is yes, then follow up by text every couple of days. Not everyone would want that— they might not want it at all, or they might not want it from me— but it’s essential to offer, because it’s not over after a successful labor and delivery. The curse extends beyond. The Torah recognizes that, and we need to as well.

Calling it a curse is not a diminishment of the miracle of childbirth. It is an act of care and service to the women who give their bodies for that miracle. If you know it’s going to be miserable, then you might be ready. When it happens, you won’t feel quite as surprised, quite as lonely, and maybe you’ll actually be able to wrap your mind around the fact that it will pass. That your brain will function again. That you will feel valued again as more than a subpar human cafeteria. That you will come to love your child with every fiber of your heart. But if nobody talks honestly about what’s coming, if they only talk about the miracle and not about the curse, then you won’t believe that it gets better. They lied to me until now, you’ll think: Why ever should I believe them? They just spout rosy nonsense! This pain is just my life now. Forever. Why bother.

Rabbanit Leah Sarna is the Associate Director of Education and Director of High School Programs at the Drisha Institute for Jewish Education.

What the curse of Eve teaches us about post-partum motherhood