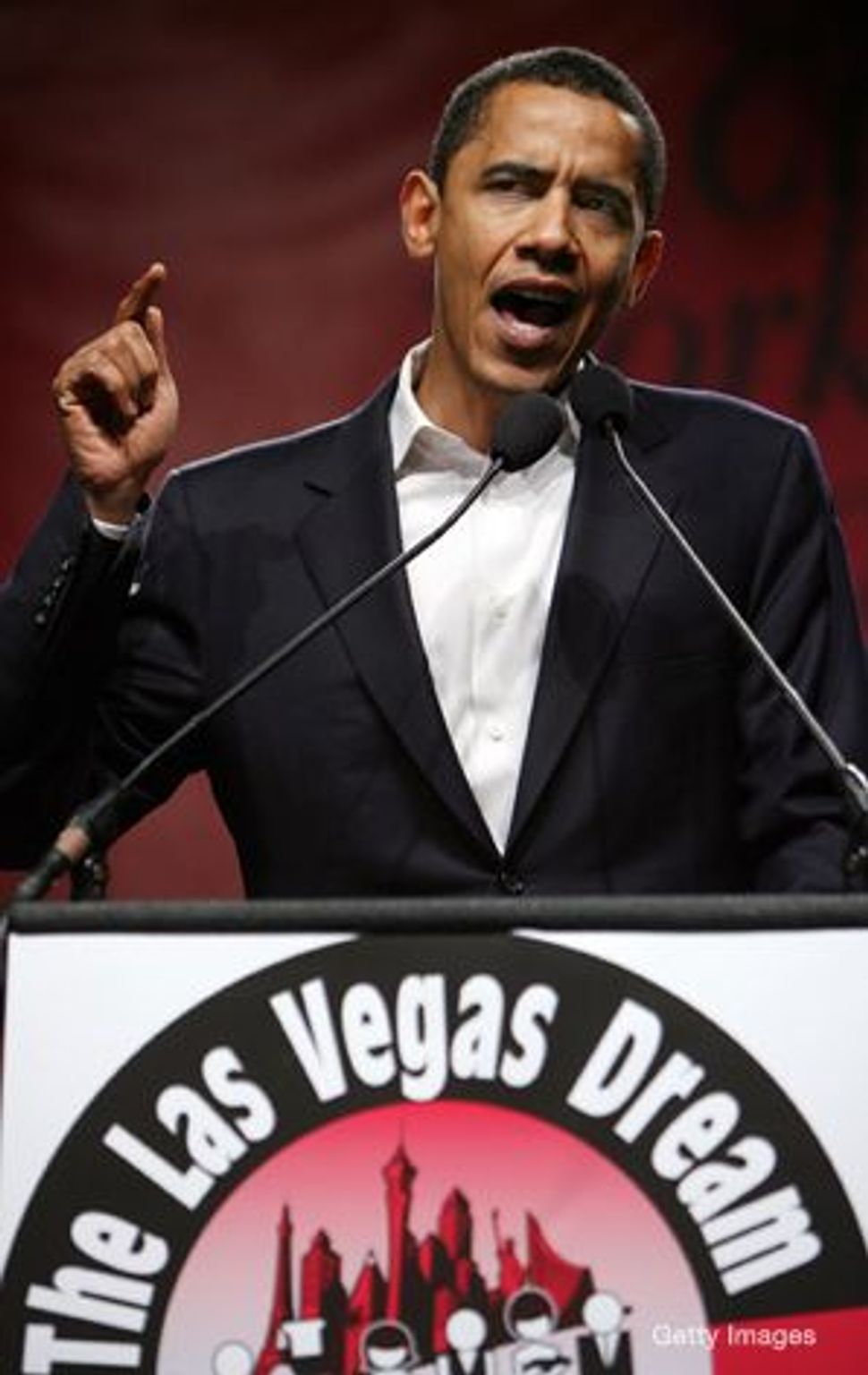 OBAMA: Illinois senator is aiming for the top slot in Las Vegas

When it comes to presidential primaries, Jewish Americans have generally found themselves sitting on the sidelines in such late-voting states as New York, New Jersey and California. This year, due to the reshuffling of the primary calendar, the community has the potential to have an impact in at least one key battleground state. 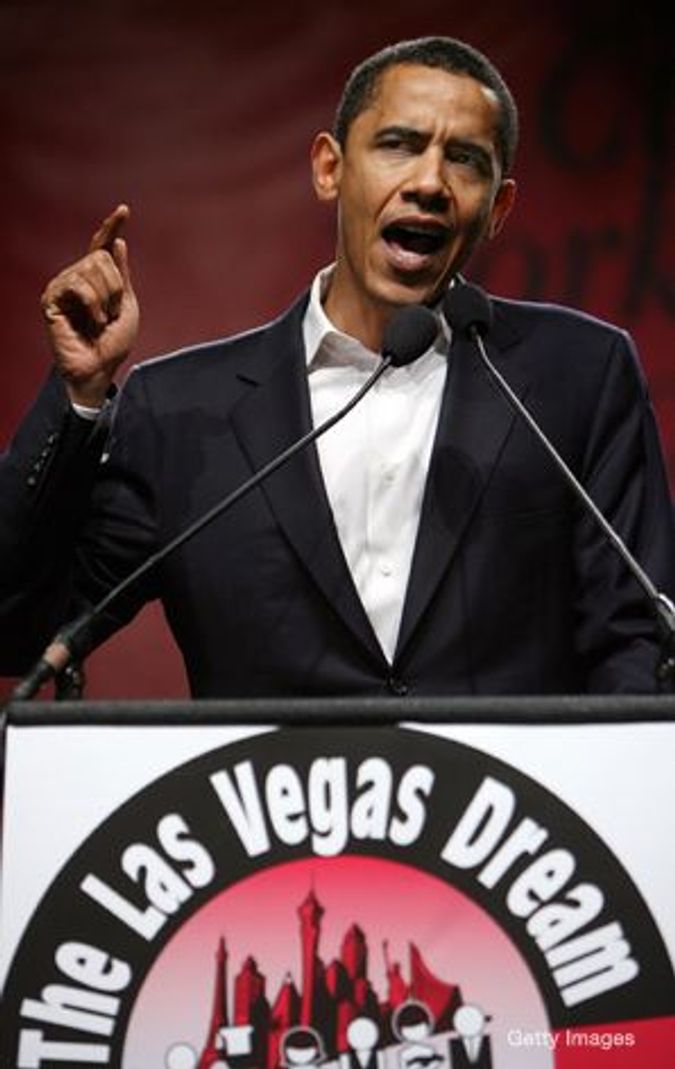 OBAMA: Illinois senator is aiming for the top slot in Las Vegas

Nevada — home to one of the country’s fastest-growing Jewish communities and a rising center of the new American West — will hold its caucus January 19, 2008. The contest, now third on the official Democratic calendar, could well prove pivotal if none of the party’s frontrunners emerges from Iowa and New Hampshire with a decisive advantage.

As the battle for influential endorsements and grass-roots supporters heats up in the Silver State, Nevada’s independent-minded residents are preparing for their political close-up. Home to the increasingly liberal Las Vegas in the south as well more conservative rural communities in the north, the state is booming with new arrivals and is growing increasing multicultural. Jewish Nevadans, long an outsized presence in the state’s bedrock gaming industry, have more recently played a growing role in the state’s politics and are taking part in the current contest as donors, endorsers and volunteers.

Though two of the state’s most prominent Jewish Democrats — Las Vegas Mayor Oscar Goodman and Rep. Shelley Berkley, a chair of the upcoming caucus — have so far declined to make endorsements in the race, a number of the state’s prominent Jews have begun taking sides.

Some of the biggest names from the gambling industry have established themselves as important supporters in both parties. On the Republican side, Sheldon Adelson, the billionaire chairman and CEO of the Las Vegas Sands Corporation, has contributed to and raised funds for the campaign of Rudy Giuliani. On the left, Elaine Wynn, wife of the prolific Las Vegas developer (and self-professed Buddhist) Steve Wynn, has donated to the campaign of Barack Obama. The Illinois senator is the latest stop on the meandering political path of the Wynns, who swung away from the Democrats in 1996, after former president Bill Clinton promoted a federal gambling tax.

As in other states, the Clinton campaign in Nevada has vigorously pursued endorsements from a network of influential community leaders in an attempt to create buzz and a sense of inevitability. Over the past two months, the campaign has named dozens of people to Nevada “leadership councils” in education, heath care, business and women’s issues. The campaign’s support from business leaders includes several prominent members of the Jewish community, including Stephen Cloobeck, chairman and CEO of Diamond Resorts International, and Myra Greenspun, wife of Brian Greenspun, a longtime friend of Bill Clinton and owner of the Las Vegas Sun newspaper.

Steve Wolfson, a member of the Las Vegas City council who has not made an endorsement in the race, said he had received calls from staffers for Obama and John Edwards but felt that neither campaign reached out “with the same strength or intensity” as the Clinton campaign had. The New York senator, Wolfson said, had met personally with him and roughly a half-dozen other politicians within the past few months — a meeting that was followed by a second sit-down with Bill Clinton.

“Frankly, I’m not sure what a city councilman’s endorsement would do,” Wolfson said, chuckling at the Clintons’ focus. But he acknowledged that “many” of the dozen or so politicians who met with the former president had subsequently signed on to the Clinton team.

But if the New York senator leads in endorsements from prominent business and political leaders, the backing of the Silver State’s powerful unions — which could prove indispensable in mobilizing turnout for the January 19 caucus — is still up for grabs. A pillar of the Democratic base nationally, unions are particularly robust in Nevada, where the gambling and hospitality industry is highly organized.

The Democratic contenders have courted union leaders as intensely as they have the boldfaced names behind the Strip’s gambling operations. The state’s Culinary Workers Local 226 of UNITE-HERE, which represents some 60,000 casino workers, is expected to endorse a candidate in early December. The union is considered likely to back Obama or Edwards. In a move apparently intended to blunt the impact of a union endorsement for one of her rivals, Clinton announced earlier this month that she had won the support of 200 nurses statewide, many of whom are members of the 17,500-member Service Employees International Union Nevada, which has yet to back a candidate.

But whatever the ultimate mix of endorsements turns out to be, the campaigns are counting on their own grass-roots operations to bring them to victory on caucus day. Fewer than 10,000 Democrats caucused statewide in 2004, when the Nevada contest fell late in the primary season, and party officials are hoping to quadruple that number January 19. (Unlike a primary, where voters cast ballots for their preferred candidates, a caucus requires voters to attend in-person contests, where delegates are apportioned according to the number of supporters in the room.)

Given the relatively small size of the caucus in absolute numbers, the Jewish community — estimated at 65,000 to 80,000 — is poised to play a disproportionate role.

Dan Kladney, 59, a volunteer for Barack Obama in Reno, said he attended a caucus training earlier this month and quickly spotted more than a dozen members of his synagogue, Reform congregation Temple Sinai. Four hours to the south, retiree Shirley Germain has been serving as a precinct captain for the Clinton campaign and is recruiting residents of her retirement community, many of whom are also Jewish.

Germain, who moved to the Las Vegas suburb from Long Island, with her husband in 1994, said she brought her staunchly Democratic politics, her experience as a union organizer and her Jewish ethics with her.