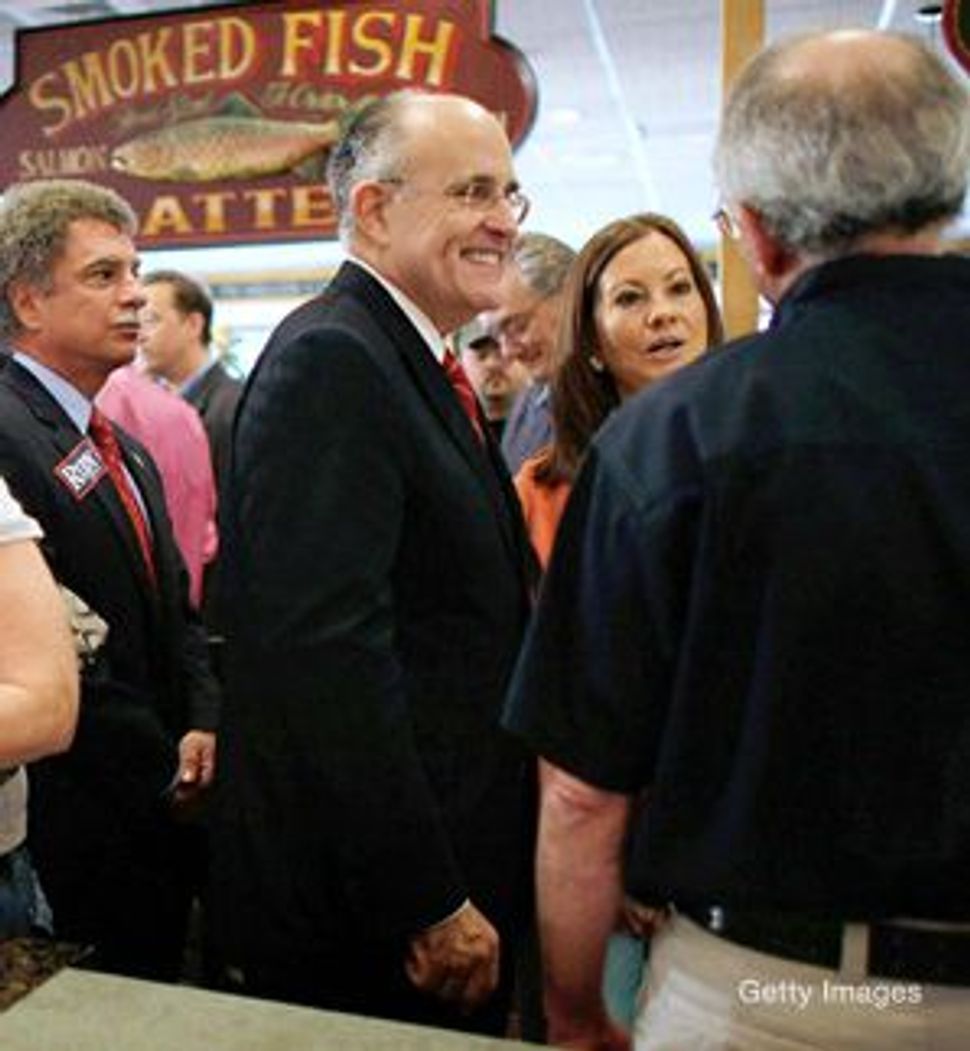 Fishing for Votes: For Republican presidential hopefuls, the Florida primary is a critical contest. Former New York mayor Rudy Giuliani has bet heavily on a strong showing in the Sunshine State.

Boca Raton, Fla. – Politically speaking, there is little room between Jerry Levy and his daughter Nanette Gordon. Republicans both, the two sat side by side as Senator Joseph Lieberman sang John McCain’s praises at an event sponsored by the Republican Jewish Coalition here last week. 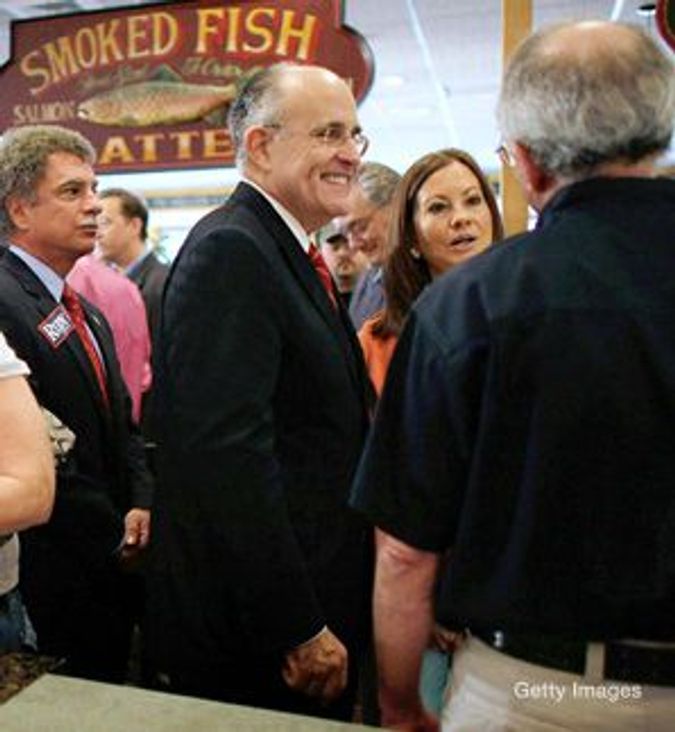 Fishing for Votes: For Republican presidential hopefuls, the Florida primary is a critical contest. Former New York mayor Rudy Giuliani has bet heavily on a strong showing in the Sunshine State. 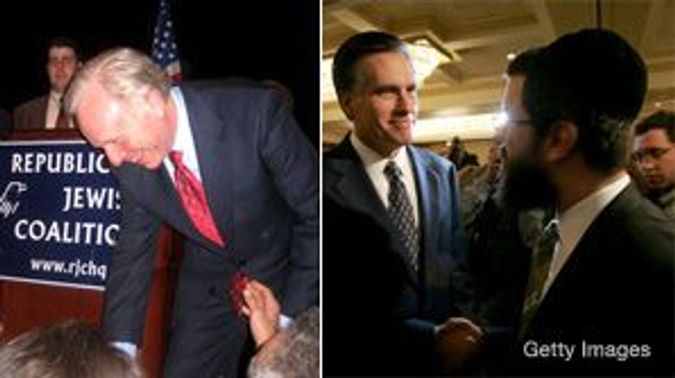 Reaching Out: The Florida chapter of the Republican Jewish Coalition has been sponsoring events for leading GOP candidates. Senator Joe Lieberman (left), endorsing John McCain, addressed the group January 16. Mitt Romney (right) spoke on his own behalf on the 22nd.

Come January 29, however, when Florida holds its primary, the father and daughter will part company — with Levy backing the Arizona senator and Gordon throwing her support behind former New York mayor Rudy Giuliani.

“I was going to go with Giuliani,” said Levy, a onetime New York restaurant and nightclub owner, “but the momentum is with McCain, and I don’t want to waste a vote.”

In discussing her pick, Gordon, proprietor of a Boca Raton-based pet-sitting business, was more passionate.

“I’m very strongly for Giuliani,” she said. “I saw what he did with a city that is not easy to run. I think he could take the world by storm. I think he’ll kick butt.”

Divided opinion is the order of the day as the nation’s eyes turn to the Sunshine State. On the Republican side, polls show a four-way race, with McCain, Giuliani, former Massachusetts governor Mitt Romney and former Arkansas governor Mike Huckabee all in the running. Among Jewish Republicans — a small but influential slice of the state’s roughly 700,000 Jews — support has coalesced around Giuliani and McCain, both of whom are seen as strong on national security issues, often a decisive factor for Jewish Republicans.

The division between Levy, 76, and Gordon, 45, is, to a degree, mirrored by recent polls, which find McCain — who, at 71, is the field’s oldest candidate — to be the top choice of voters over 65. Such a divide could prove decisive in Palm Beach, currently the Florida county with the largest number of Jews — 209,000, according to a 2005 survey. The same tally showed that 60% of the county’s Jews were over 65.

Florida — with its heavy concentration of former New Yorkers (many of them Jewish) — has been central to Giuliani’s strategy from the start. Poor performances in the early primaries have, by the candidate’s own admission, made a strong Florida showing a must if his campaign is to survive. McCain supporters see the endorsement by Lieberman, arguably the most high-profile Jew in American politics, as the best tool available for drumming up Jewish support for the Arizonan.

At the heart of the Florida race is an irony: Though the fate of the Jewish vote has taken center stage, the number of registered Jewish Republicans in the state is relatively small. Ira Sheskin, a University of Miami-based demographer, estimates it at 80,000. (Florida holds closed primaries in which only voters registered with a specific party can cast ballots.) And yet, despite such small numbers, the state’s Republican Jews, viewed in light of their favored candidates, reveal themselves to be anything but homogeneous.

In discussing how the state’s Republican Jews might vote, Luis Fleischman, director of the Jewish Community Relations Council of Palm Beach, saw age as a potential factor.

“I would separate between two generations of voters,” he said. “I would say that the younger generation — 50 and down, that’s young in Florida — has more of an economic focus. The older generation is more concerned with security and Israel.”

Economically minded Jewish voters — spurred by the recent wave of grim economic news — could, some say, be enticed by Romney, the candidate with the most extensive business background. Among those anchoring Romney’s Florida campaign is St. Petersburg developer Mel Sembler, a leading Republican fundraiser and Republican Jewish Coalition board member who served as the American ambassador to Italy from 2001 to 2005. Sembler’s wife, Betty, introduced Romney at a January 22 RJC event in Boca Raton.

When Lieberman appeared before the RJC to endorse McCain six days earlier, he was introduced by Adam Hasner, majority leader of Florida’s Republican-led House of Representatives. Hasner invited the audience to think back to the 2000 election, when Lieberman came “within an eyelash” of becoming vice president. That Lieberman could go, in just eight years’ time, from being on the Democratic ticket to endorsing a Republican for president was, in Hasner’s words, a triumph of “principle and patriotism over partisanship.”

But while McCain backers have discussed the Connecticut senator’s endorsement as an unqualified boon, some have questioned just how effective it might be.

“It’s a strategy I can’t fully understand,” said Karen Unger, Giuliani’s Florida campaign manager. “He’s not a Republican, and independents can’t vote. A Democrat-turned-independent surrogate is not causing me to lose much sleep in a Republican primary.”

Others have gone so far as to say that Lieberman’s endorsement might even be a liability.

Samuel Heilman, a sociologist with the City University of New York and author of the book “Sliding to the Right: The Contest for the Future of American Jewish Orthodoxy,” noted that Orthodox Jews, who have shown a decided preference for Republican candidates in recent presidential elections, have, in some instances, evinced a strong distaste for Lieberman.

“They question his Orthodoxy,” Heilman said. “And now that he’s changed parties, they regard him with double suspicion. I would suspect you’ll see a large vote for Giuliani.”

Sheskin pointed to a very different sort of Jewish voter who, when faced with a choice between McCain and Giuliani, will likely lean toward the former mayor: the supporter of abortion rights.

“The fact that Giuliani is pro-choice and McCain is not,” he said, “is going to earn him something in the Jewish community.”

Despite the various critiques of their candidate’s star endorser, McCain’s Florida supporters remain sanguine and hope to have Lieberman in their camp come November, when he would have the power to draw votes from Democrats and independents.

“He’s a rock star down here,” said Ellyn Bogdanoff, majority whip in Florida’s House of Representatives. “And in a state that the president won by 537 votes, it makes a difference.”