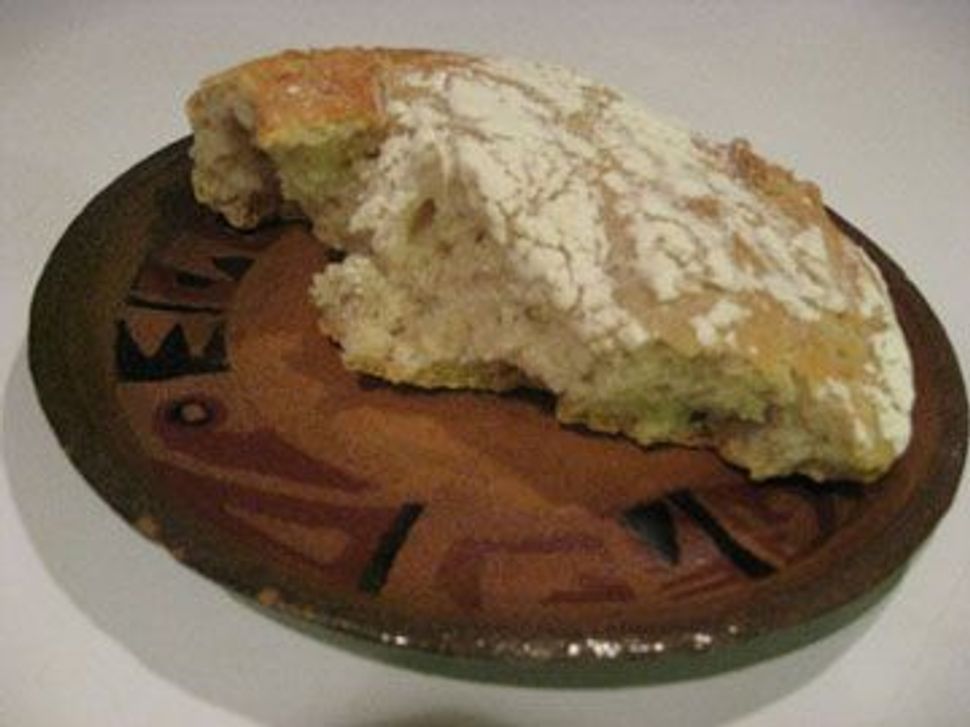 I’ve been working on a few bread projects lately: sourdough starter, and the no-knead focaccia-style bread recipe from the NY Times last year. Today, I completed a successful merger and the result? Only half a loaf left, after my parents & I were through with it at dinner.

The no-knead recipe goes something like this: wet dough + long time to rise = big air bubbles. Home-bakers tend to be more familiar with the opposite kind of bread, that is, a very elastic, kneadable dough, that rises for 2-3 hours, and gives a dense, fine-crumb loaf. You could come home from work at 4 and still have challah for shabbos at 8 kind of thing. But the air bubbles intrigued me — who doesn’t love french bread! and so I’ve been experimenting.

With this bread, you need 12-18 hours. Mix the flour, water, salt and yeast the day before you want to eat it, and let it sit overnight, covered, someplace warm and cozy. By morning it will have huge air bubbles — almost like a crumpet. You fold it a few times two hours before you cook it, and it’s a little tricky to figure out how to work with the dough when it’s so wet — metal scrapers would be useful. But you don’t have to move it around much, and adding more flour makes it manageable. Then you cook it in a pre-heated pot in a very hot oven for about an hour and voila! dinner.

The recipe calls for commercial yeast, though, and with all I’ve learned from Sandor Katz and Sally Fallon about natural fermentation lately, I’m just not so into a chemically-produced, single strain of sacchromyces cervaciae. Enter: sourdough starter, my pint-sized container of bubbly flour-and-water mixture, that is happily hosting a range of yeasts — some from my friend Tova, who lives in Illinois, who first gave me the starter; some from Connecticut where I kept it for two months; some from Rochester and Toronto, where it visited briefly, and finally, some from North Vancouver where I’ve been staying with my parents this winter. Micro-biodiversity — yes please!

Since starter is about equal parts water and flour (with unknown parts magic), and since the rule of thumb is to replace 1 tablespoon (or package) commercial yeast with one cup starter, I added 1 cup of starter to the recipe, and reduced the amount of flour and water called for by 1/2 cup each. And, oh boy. Delicious. Spongy, crispy, sourdough focaccia — the success of which has already been alluded to by the quick devouring of half the loaf just moments ago…