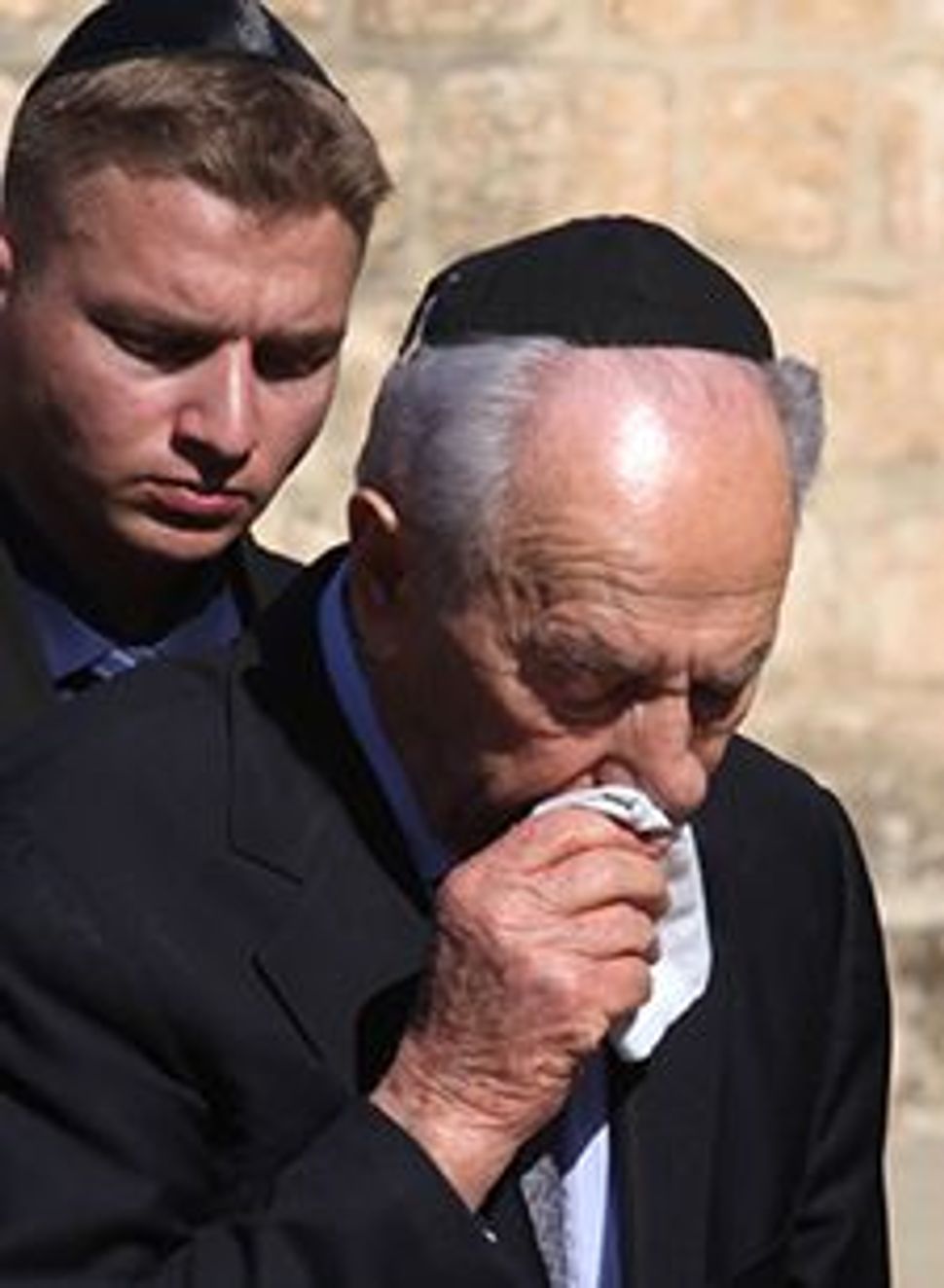 In 2008, a small but significant change took place on the mailbox of the Tel Aviv apartment where Sonia Peres, wife of Israel’s president, Shimon Peres, lived quietly, far from the elegant presidential mansion in Jerusalem, until her death January 20. 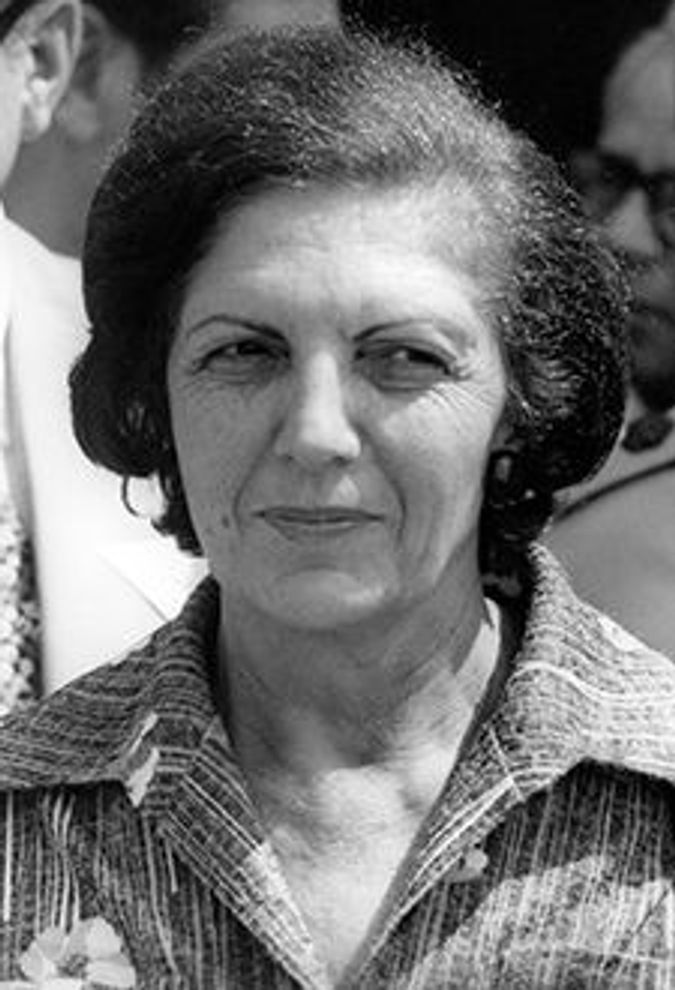 A Private Life: Sonia Peres, in 1977 photo, the year of her husband?s first stint as prime minister, shied away from public life. Image by Getty Images

Neighbors — and eventually, the press — noticed that suddenly, about a year after Shimon Peres was sworn in as president, the mailbox read simply, Sonia Gal. “Gal” was a Hebraicized version of the maiden name of the country’s first lady. Before she met the future career politician in the Ben Shemen youth village, her name had been Sonia Gelman.

This name change was the first tangible evidence of the depth and irreversibility of the painful estrangement between Sonia and Shimon Peres. The separation was rooted, and it reached a head when, at the age of 84, the man who had served twice as prime minister decided to become a candidate for the presidency, against his wife’s wishes. So complete was her rejection of his continued political activities that she did not attend his swearing-in ceremony in 2007.

“Sonia always really, really hated the role of wife of a public figure,” said Greer Fay Cashman, who covers the Jerusalem diplomatic social scene for The Jerusalem Post and was, in addition, a neighbor of the couple.

As she and Simon were in their 80s and she was in failing health, Sonia hoped that her husband, who had held Cabinet positions in 12 Israeli governments, would agree to join her in the quiet, private life she treasured after his more than 60 years in public service. “She always expected, after all of her years standing behind him in his career, that they would spend their twilight years together,” Cashman said. “She had never had a regular husband or a regular life. But she believed that someday, he would agree to slow down. When she realized that he wouldn’t, it was too much for her, and she gave him an ultimatum.” 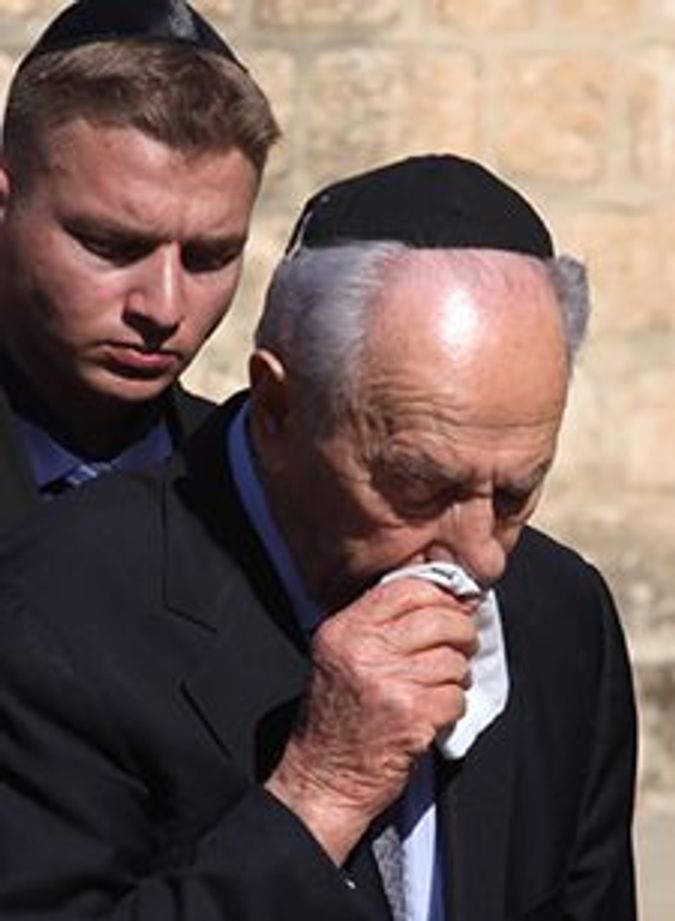 When faced with that ultimatum — a choice between public service and his marriage — Shimon Peres chose to stay in the public eye. And Sonia Peres did not back down. While they remained married legally, for all practical purposes the union was over. The name on Sonia’s mailbox changed, and she never set foot in the presidential mansion; when Shimon spent the night in Tel Aviv, he stayed at a hotel, not at his home. He spent weekends alone in the presidential residence with his staff and his books, while his extended family sat down for Friday night dinner at Sonia’s table in Tel Aviv.

And so, the couple met again only after her death, at age 87. Upon word of his wife’s passing, the president left his Jerusalem residence and headed toward the apartment in northern Tel Aviv. He entered her room alone and kissed her goodbye.

Cashman doesn’t think the gesture was just for public consumption. “I believe he really loved her,” she said. “When she died, he cried real tears. But with all the love he had for her, he couldn’t put his work for the country aside. He was involved in too many things. He was totally incapable of putting on his slippers. His children don’t appear to have held his choice against him. When his daughter, Tzvia, was interviewed on the radio, she said she knew that if or when her father would be forced to retire, he would die.”

Shimon Peres generally refused to discuss his strained marriage with the media, but in one interview, he acknowledged the fact that he and his wife had grown apart to the degree that their differences were unbridgeable. “When you’re 16 you’re different from an 87-year-old person,” he said. “Why should we hide it? We lived together for 70 years…I have a lot of respect for her and for her desires. But just like she can set her agenda, I can set my own agenda. It reached a situation in which it no longer felt right.”

For most of Shimon Peres’s political career, there seemed to be a quiet truce between husband and wife. He didn’t impose public life or media exposure on her, and she didn’t demand his presence beside her at home. She was often compared favorably with more high-profile first ladies such as Leah Rabin and Sara Netanyahu, who were visibly at their powerful husbands’ sides in public.

Tales of her modest, charming and funny personality leaked out. On the rare occasions when she agreed to travel with her husband (her last trip abroad with him was in 1994, when he received the Nobel Peace Prize in Oslo), she also made friends with his American Jewish supporters. One woman, who recalls chatting with her at a Manhattan cocktail party, remembers how Sonia Peres described the process of packing her husband’s suitcase for every trip, saying that if he had to do it himself, “he wouldn’t be able to find his own underwear.”

Her numerous volunteer activities and her role as surrogate mother to disadvantaged youth were well known in the small country, despite her refusal to discuss them with reporters.

“All of the stories are true,” confirmed Hanoch Weitz, a childhood friend of Sonia’s who remained close to her over the years. “She was a good neighbor; she was always a sweet and caring girl, very modest, very giving.”

Some of her acts of kindness were visible to the eye. Cashman lives three doors away from the prime minister’s residence. In the 1980s, supporters of the radical right-wing Jewish underground set up camp outside the house to protest the imprisonment of some of their members who had committed violent acts. “I would see Sonia taking their children into the house to feed them; she took care of those children, and helped the mothers obtain supplies they needed to take care of them. She never allowed political differences to get in the way of humanity.”

Naturally, the numerous tributes to Sonia Peres in Israel since her death focused on her dedication to her family and to her volunteer work, and on her impressive life story. A pioneering member of the founding generation of Israeli women, Sonia Gelman was notably adventurous. In 1942, two years after meeting her future husband at the youth village, where he was a student and she was the daughter of the carpentry teacher, she volunteered for the British army at the age of 18, serving at an Egyptian hospital. After a dispute with one of her supervisors, she was transferred to a camp where she drove trucks, ambulances, command cars and tanks.

Following the war, Shimon Peres and Sonia Gelman married (the two young socialists had conducted an unusual courtship that involved reading Karl Marx by candlelight) and became founding members of Kibbutz Alumot, where she gave birth to their three children. In her rare interviews, she spoke wistfully of the days when the couple lived in a tent. He worked as a dairy farmer, and she tended to the babies on the kibbutz — when his political career was in its infancy.

But her real home was in the forests of Ben Shemen, and it is there that Sonia Peres chose to be her final resting place, forgoing her right to a plot on Jerusalem’s prestigious Mount Herzl. When Shimon Peres decides where to be buried — beside his wife or in a single plot, alongside figures such as Golda Meir, Yitzhak Rabin and Theodor Herzl himself — he will once again be put in the position of choosing between his wife’s desire for a quiet, private place and his place in history.