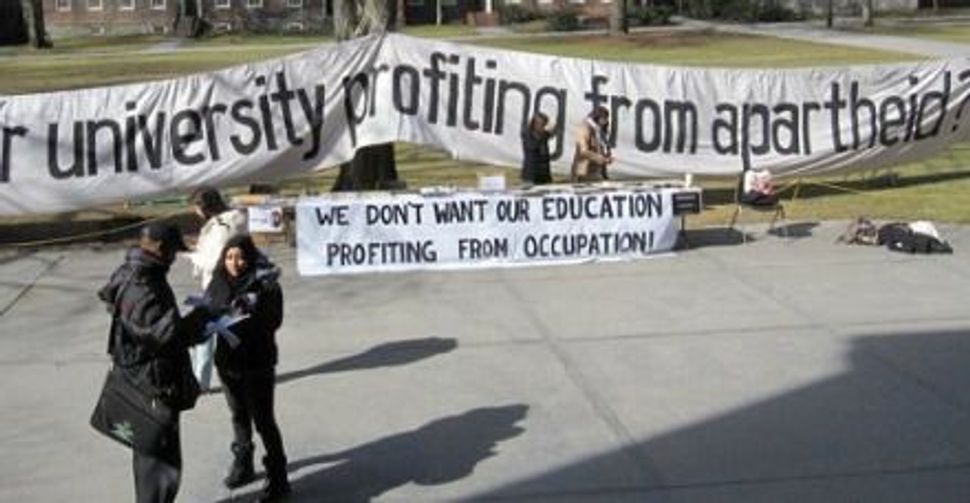 Image by Students for justice in Palestine

At its board meeting on October 24th, a task force of the Jewish Council for Public Affairs sent the proposed resolution back to the group’s member organizations —which include the American Jewish Committee, the Anti-Defamation League, and dozens of Jewish Community Relations Councils — for further discussion. These constituent members will come back together to address the issue at a May plenum meeting. This will effectively forestall any community-wide guidance from the council before the current school year is over

“On a matter that is weighty, it should come before our member agencies,” said the JCPA’s vice president, Ethan Felson.

At issue was the use of Title VI of the federal Civil Rights Act of 1964, which prohibits discrimination based on race, national origin or color in federally funded education programs. The statute does not include religions among its protected categories, but last October, the Department of Education broadened its interpretation of Title VI to include protection against “harassment of members of religious groups based on shared ethnic characteristics,” effectively including Jews.

This change was long sought by the Jewish communal world. But since the expansion of Title VI, Jewish groups have disagreed over when to wield the federal sledgehammer, with some voicing concerns that federal suits in response to anti-Israel activity could quell freedom of speech on campuses.

In advance of its board meeting, the JCPA issued a draft resolution to its member organizations, urging them to be cautious in their use of Title VI: “Lawsuits and threats of legal action should not be used to censor anti-Israel events, statements and speakers in order to ‘protect’ Jewish students, but rather for cases which evidence a systematic climate of fear and intimidation coupled with a failure of the university administration to respond with reasonable corrective measures.”

The JCPA’s most recent version of the proposed declaration — which officials of the umbrella group now refer to as a “statement” rather than a “resolution”— retains an expression of concern about squelching free discourse through misuse of civil rights law. It also adds an admonition for the Jewish communal world to consult with campus Jewish groups before deciding to file Title VI suits. The addition was mainly the work of David Luchins, who represents the Orthodox Union at the JCPA. “The O.U. formally requested that people be urged to consult local campus leaders before they rush to utilize Title VI protection,” he said, adding that the O.U. reached out to its campus constituents on the matter. “The feedback we got was, ‘Please consult with us.’”

Asked about the effect of the delay on the JCPA’s ability to issue official guidance on the matter during the current academic year, Felson said that the deliberative process was more important than speedy action. But, he added, the JCPA statement on Title VI should be seen as a form of guidance, even if it is not communal policy just yet.

“The board has made a statement, and that is, as they say, not nothing,” Felson said.