Catching Up With Amos Oz, An Urbane Rebel Of The Holy Land 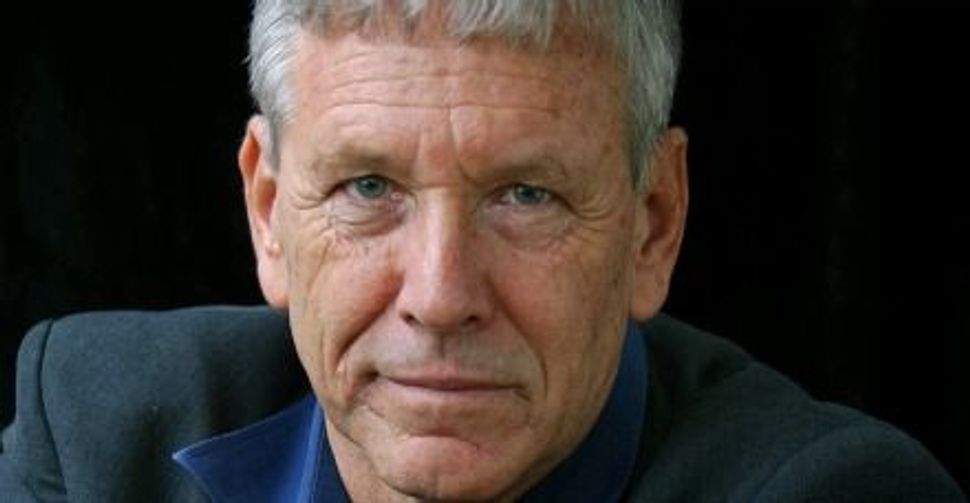 Amos Oz greets me in the lobby of an elegant hotel, looking a little out of place. Like one of the characters in his new book, he is undramatically unkempt: glasses slightly askew; his gray pants and scruffy shoes melding into the background, as if he were a bus driver or a shopkeeper, someone who blends into the routine choreography of the day.

Then he sits down and begins to speak, and the words flow in such precisely formed sentences — his English a mix of Yiddish storyteller and Oxford don, with a trace of Israeli inflection — that it’s impossible not to be captivated.

Oz’s writing, both fiction and nonfiction, has captivated audiences for decades, and his slender new book, “Scenes From Village Life,” is likely to continue the trend. But Oz’s politics have not always drawn the same applause among American Jewish audiences. When he began advocating a two-state solution shortly after the 1967 war, it was considered a controversial, even heretical, stand. Now it’s official policy of the Israeli and American governments.

“When colleagues and I started advocating for a Palestinian state next door to Israel, there were so few of us, we could have conducted our national assembly inside a public telephone booth!” he said. “Today, almost the entire political spectrum in Israel is ready to accept a Palestinian state, under certain restrictions.”

This message, he says, has found much more receptive audiences than on previous trips. When traveling through the United States as he is for this book tour, he says, “I see more openness to dissident Israel opinion, less anger. I find less of the frantic, almost neurotic persistence that Israelis have to unite behind their government, at least when they go abroad.”

To make the point, he pretends to be an American: “Can’t you please lower your voices a bit when you argue with each other?” Then back to being Amos Oz: “It was embarrassing! At long last I feel free to quarrel with my next-door neighbor at the top of my voice. That’s independence.”

Oz is 72 years old now, with gray hair and a lined face, and he is one of a handful of the most celebrated writers in his country. “Tales of Love and Darkness,” his acclaimed 2004 memoir, contains scenes so vivid and well known that many readers can recount them by heart. The literary progenitors of his latest book are Chekhov and Faulkner, but he sees an even wider range of influences in Israel’s next generation of impressive writers: “The beauty of it is that those new writers have no common denominator at all, except they all write in Hebrew. We have everything from realism to wild fantasy and everything in between.”

He places this flourishing literary scene in a larger context, arguing that Israel is going through a “golden age” of culture in music, theater, cinema, visual arts, science and technology. “Israel is very intense, edgy, as multicultural as a society can possibly be,” he offered as an explanation. “It’s extremely self-critical, and many Israelis — though not all — are capable of laughing at themselves. All those things provide for a creative climate.”

About the political climate, Oz is less optimistic. He has said for years that politicians are people, too, and, like the characters in his stories, are capable of great surprise. Still, what worries him most is not the isolation he sometimes feels when traveling abroad, but the ambiguity it reaps at home.

“Israel is less self-confident than it was 10, 20, 30 years ago,” he said. “Israelis used to be, at least in their own eyes, a miracle. Now they are just a nation in trouble. Yes, there is this cultural honeymoon, but it’s a nation in deep trouble. Isolation takes its toll on the Israeli psyche.”

So he works quietly in his study in Arad, a pen of one color for creative writing, a pen of another color for political writing. “Village” took about two years to complete. Another work is in progress, but Oz will only answer a question about it, with a devilish smile.

“I’m a little reluctant to expose my pregnancy to X-rays,” he said. “It’s not good for the baby.”

Catching Up With Amos Oz, An Urbane Rebel Of The Holy Land