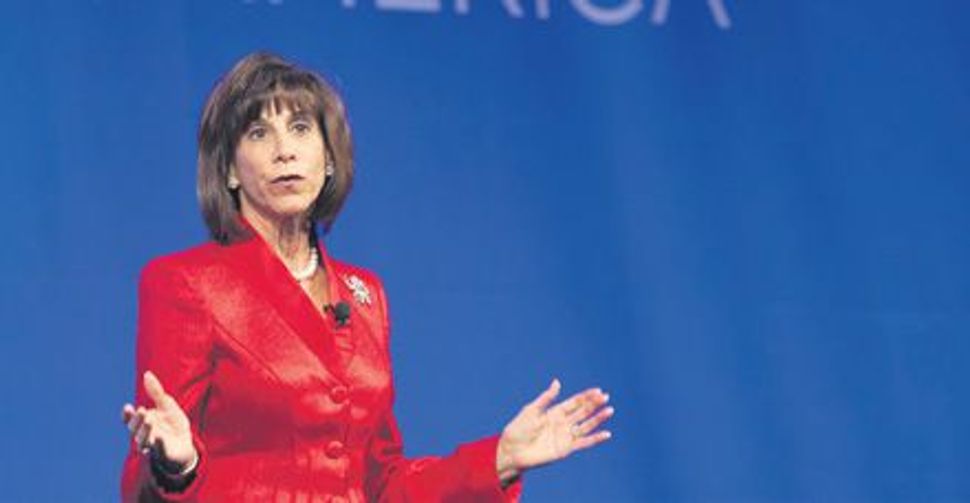 Image by eric stephenson for jfna 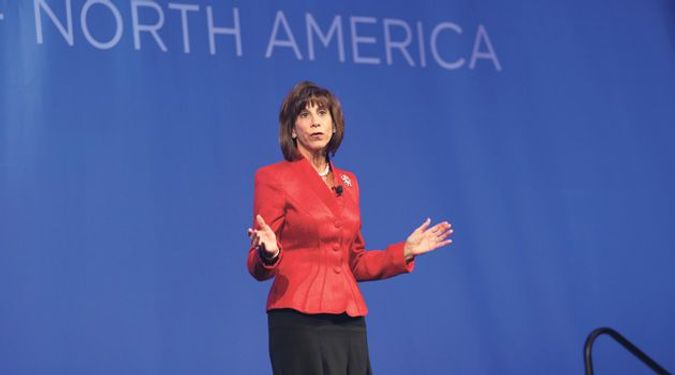 New Method: Kathy Manning, chair of the Jewish Federations of North America board, says a new system will give donors more control over their money. Image by eric stephenson for jfna

The move, taken by the Jewish Federations of North America at its annual General Assembly conference, will force the Jewish Agency for Israel and the American Jewish Joint Distribution Committee to compete for the first time with other overseas groups for funds from the umbrella group. The retention of this looser structure, dubbed the Global Planning Table, appeared to be a last ditch-effort by JFNA to save its crumbling process for collective Jewish giving abroad.

In a November 8 interview with the Forward during the G.A., Kathy Manning, chair of JFNA’s board of trustees, explained one impetus driving the transformation in the umbrella group’s historic commitment to funding needs in Israel and overseas.

“One of the things we’ve lost over the years is the understanding of what our partners do, how they use our dollars to make a real impact on the needs that they deal with,” Manning said.

Her comment reflected the growing resistance among federation officials to provide a blank check to their recipient agencies, including the Jewish Agency and the JDC, in a way that allows those agencies to manage federation charitable dollars as they please. The new JFNA plan also reflects a continuous drop in allocations by federations for causes outside their immediate communities.

A large majority adopted the new plan in a closed-door vote by JFNA’s board of trustees at the closing of the G.A.

The dramatic change in policy was felt only behind the scenes of the annual Jewish parley. It was not discussed in plenary sessions and was touched on only briefly at a few breakout meetings.

“JFNA will tell you that there was a lot of discussion about it, but for those who have concerns, this is probably not enough,” said the Jewish Federation of Nashville and Middle Tennessee’s executive director, Mark Freedman, who attended the G.A. meeting.

An official who works for a large federation and asked not to be named complained that “no one understands the details” of the new plan and that federations were not given a chance to make changes. In an uncharacteristic fashion, debate over the plan was reserved to coffee shop discussions between delegates and anonymous e-mails sent to federation officials. Even the Jewish Agency, the major stakeholder, chose not to take on the plan publicly.

Under the new process, JFNA will decide where to send its overseas dollars based on annual discussions at the Global Planning Table. Federations participating in the process — parts of which will be reserved only to federations actually making donations for overseas — will hear ideas from members, from JAFI and JDC, and from other agencies and providers. It will then decide where to send the community’s collective funds. “This is an opportunity to really think what it means to be a collective entity,” said Joanne Moore, JFNA’s senior vice president for global planning who is in charge of launching the new process.

The collective nature of the federations’ giving to overseas causes has, in fact, been eroding for years.

Allocations that the federations send to JFNA for collective allocation to Israel and other overseas needs have dropped by nearly 20% over the past four years. Last year the local federations sent JFNA only $135 million for allocation to the Jewish Agency and JDC. Most federations prefer instead to provide funds directly to individual programs, either by designating their giving to JFNA to a specific program or by contracting directly with agencies and providers abroad, outside the JFNA framework. This provides donors with more control over the use of their dollars, but strips the community of its collective power. Large federations such as those in Boston and Philadelphia already do most of their funding directly, and other federations are struggling to compete with direct fundraising in America being conducted by agencies operating abroad.

The obvious loser from the new funding system is the Jewish Agency, which relies on JFNA’s unrestricted funds for nearly one-third of its budget. Under the current system, JAFI received 75% of all federation funds sent abroad via JFNA while the other 25% went to JDC.

With the new plan, this sense of security will disappear.

The Jewish Agency has been looking beyond the JFNA funding system for years. It has strong direct ties with leading federations and donors that in fact already bypass the umbrella organization. This year, when the Jewish Agency needed emergency funding for a housing program in Gondar, Ethiopia, it turned directly to the New York federation, which came up with the funds. The Jewish Agency is also relying increasingly on funding from the government of the state of Israel, which partners with the organization in many programs.

For JDC, the new funding policy is seen as promising. The group currently receives less than 10% of its total budget from JFNA’s unrestricted gifts. It has been arguing for years that the 25% share it gets of JFNA’s overseas funds is outdated and unjust. “Money should follow the needs,” said JDC’s CEO, Steven Schwager. “We believe that in a fair process, we will receive more funding.”

JFNA officials dismissed claims that they are abandoning their historic partners. “I can’t imagine a situation that they will not get funded. They have expertise, and they will sit at the Global Planning Table,” Moore said.

The future could spell even more trouble for overseas funding.

Even if the new process succeeds, federations could face growing needs for domestic funding in coming years. Federation officials warned that the cuts to Medicare, Medicaid and Social Security, which are being discussed in Congress, could deal a blow to federations’ ability to continue to provide social services to their members. Cuts could force communities to spend more at home, leaving fewer dollars available for overseas needs.