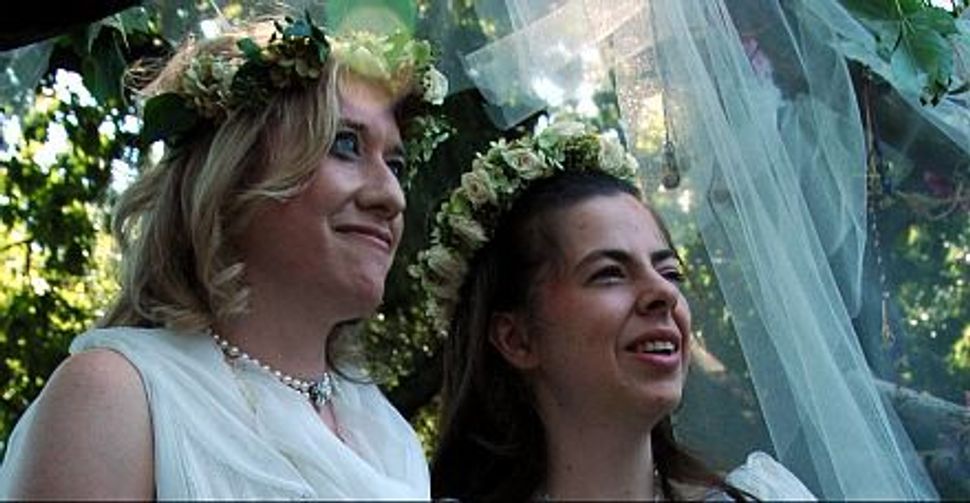 Image by courtesy of jill hammer 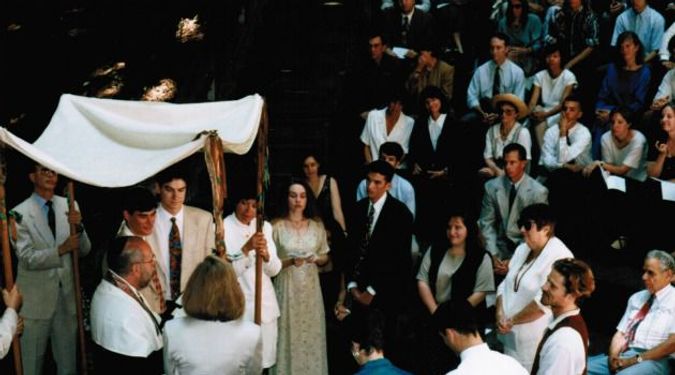 Tying the Knot: Friends and relatives of Gregg Drinkwater and David Shneer gather around their chuppah, each offering one of the seven Jewish wedding blessings. Cantor Sam Radwine officiated at the wedding in 1996. Image by courtesy of Gregg Drinkwater

Having recognized gay rights with their 2006 acceptance of gay unions, Conservative rabbis are now wrestling with the issue of gay rites.

The recent efforts of three leading rabbis to construct a kosher wedding ceremony for same-sex couples hews closely to the traditional Jewish heterosexual ceremony, in an effort, they say, to ensure that same-sex couples suffer no inequality in the sacred standards governing their vows. But these efforts, ironically, are now drawing criticism from some activists for replicating aspects of the Jewish wedding rite that they consider sexist.

“In a way it’s a shame, there is an opportunity for a less problematic, more contemporary liturgy,” said Jay Michaelson, founding director of Nehirim, a lesbian, gay, bisexual and transgender Jewish group. (Michaelson is also a Forward contributing editor.) 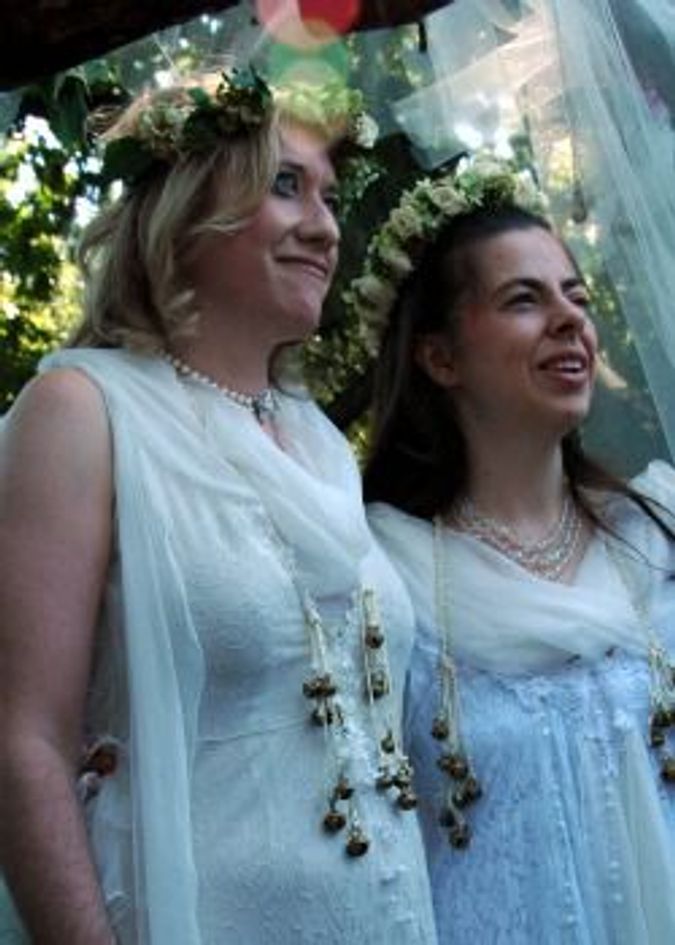 Rabbi Jill Hammer, right, with her wife, Shoshana Jedwab, at their wedding. Image by courtesy of jill hammer

What’s more important than parity between same-sex and heterosexual ceremonies, critics say, is equality between partners. While traditional Jewish marital rites — or kiddushin — describe the man as the owner of his wife, some gay and lesbian Jews say they want to avoid this hierarchical language in favor of an egalitarian template.

The trio of rabbis leading the effort to devise a sacred structure for same-sex wedding vows that will pass muster as kiddushin are Elliot Dorff, a professor of Jewish theology at American Jewish University; Daniel Nevins, Dean of the rabbinical school at the Jewish Theological Seminary; and Avram Reisner, head of the Chevrei Tzedek Congregation in Baltimore. The same three rabbis also authored an influential ruling in 2006 that welcomed gays into the Movement. At a meeting on November 16, the rabbis presented their proposal for same-sex marriage and divorce rites to the Committee on Jewish Law and Standards of the Rabbinical Assembly, Conservative Judaism’s official rabbinical association.

Because the document is still in draft form — it will likely be voted on in June 2012 — the rabbis declined to share it with the Forward. But the rabbis, describing the marriage template in broad terms, said that it was modeled on the traditional ceremony, taking place under a canopy, with an exchange of rings and a recitation of the traditional seven blessings, among other rites. The main discrepancy is that the gendered language has been changed.

According to Reisner, the rabbis felt that if they strayed too far from traditional marriage in their proposal to the committee, they would be seen as offering gay and lesbian Jews a ceremony that was both separate and unequal. “The community would not feel warmly if they felt they were being offered some radically different thing,” he said.

But according to Michaelson, while traditional marriage looks appealing to some gay and lesbian Jews, others bristle at the idea of imbuing same-sex unions with language that would imply that one party owns the other. These dynamics came into play for Michaelson when he was planning his own wedding, which took place in September.

“I didn’t want a photocopy [of traditional marriage] for a number of reasons,” he said. “For feminist reasons I don’t like kiddushin anyway, and for LGBT reasons it didn’t feel authentic to me to copy a model meant for a man and a woman to my situation.”

Instead of falling back on traditional marriage rites, Michaelson wrote his own legally binding ceremony based on the concept of nedarim, or vows.

“I didn’t feel like purchasing my husband, and hopefully no men feel like they are purchasing their wives,” he said. “Zooming back, one of the challenges for Conservative Judaism is how to accommodate both people who want something pretty straightforward and people like me, who want to create their own rituals and services and liturgy.”

Rabbi Jill Hammer said that she had similar concerns in planning her 2004 wedding with her female partner. “We were not comfortable using [kiddushin] as our template for marriage,” she said. “Not every couple understands it this way, but talmudically there is a lot of difference between the way a woman and a man are treated. We were looking for something else.”

Like many lesbian Jewish couples, Hammer and her partner structured their ceremony around a chapter from the Book of Ruth in which Ruth decides to live with Naomi, her mother-in-law. “It is about two women committing their lives to each other, sharing children and a livelihood. That was a good way to find something traditionally Jewish and use it for a foundation for our wedding,” she said.

But gay and lesbian Jewish activists weren’t the only ones who bristled at the idea of using heterosexual rites for homosexual unions. According to Reisner, the 32-member Committee on Jewish Law and Standards gave the proposed template a mixed review.

“Some in the committee felt very warmly for a ceremony that was very close to a traditional wedding,” he said. “For other people it was desirable to step away from that model altogether. There was a determination that the tenets of traditional marriage didn’t apply [to same-sex unions].”

Rather than vote on the marriage and divorce template at the November meeting, the committee sent rabbis Dorff, Nevins and Reisner back to the drawing board to come up with a second template to supplement the first. When the Forward interviewed the rabbis, they had little sense of what this second set of guidelines would look like, except that it would not hew to traditional marriage rites.

“There might be couples that would prefer something different, and there might be rabbis who could support a commitment ceremony but are not yet at the place where they could support a ceremony that looked like a marriage,” said Rabbi Susan Grossman, who chairs the Personal Status subcommittee of the Committee on Jewish Law and Standards. “If we want to make this as broadly embracing as possible, it doesn’t hurt to provide alternatives. We want to provide many opportunities for couples and rabbis to find the resources within Judaism to honor their commitment to each other in a meaningful Jewish way.”

Providing two templates — one traditional, one not — made sense to some gay and lesbian Jewish activists.

“People invest time and energy into making a mark through their wedding ceremony that reflects their own take on their Jewish journey,” said Gregg Drinkwater, deputy director of Keshet, another Jewish gay and lesbian advocacy group. “If you are using a one-size-fits-all ceremony, that is harder to do.”

Gerald Skolnik, a Conservative rabbi at the Forest Hills Jewish Center, in Queens, was asked last summer by a congregant and his partner to perform what would be Skolnik’s first same-sex marriage. Under Skolnik’s guidance, the couple ended up with a hybrid ceremony — a blessing over the wine and an altered document that resembled a ketubah, the official Jewish marriage document, but no chuppah, a choice they made on their own. Skolnik said that in the future he would welcome the guidance of the committee.

“Let’s say you are still coming to terms with doing gay and lesbian weddings, and you are interested in exploring it,” he said. “I don’t think there is anything wrong with having multiple templates for that kind of ceremony.”