Romney, Maybe. Gingrich, No Thanks 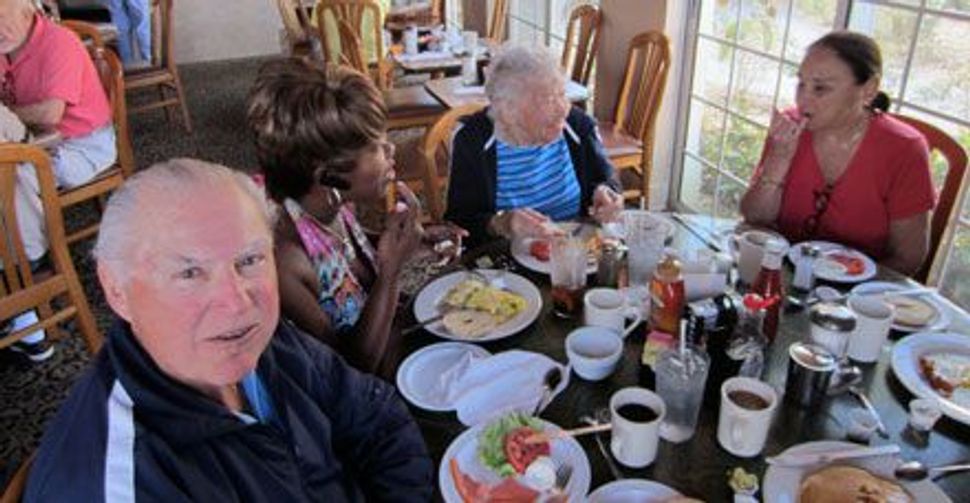 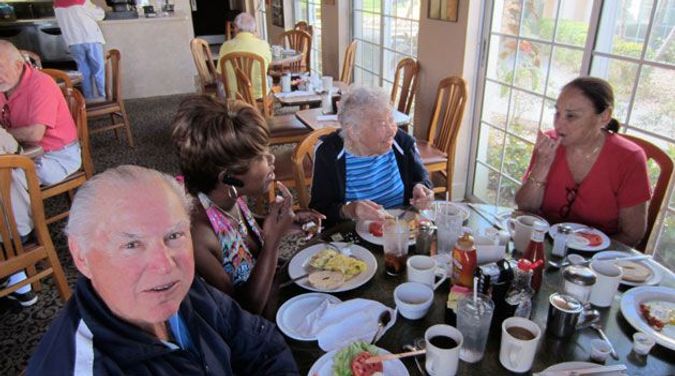 Battleground Florida: Over bagels and eggs at Huntington Pointe, a retirement community in Delray Beach, Jewish Floridians discuss their preferences in the 2012 presidential race. Image by Josh Nathan-Kazis

Here in Florida, in a year when the entire presidential race could hinge on a few electoral votes, Republicans hope that peeling away Jewish support for President Obama could help swing the election. But interviews with Jews in South Florida suggest that the GOP will have a much tougher time with that key demographic if Newt Gingrich takes the party nomination.

In a conversation at the Huntington Pointe condo development favored by elderly Jews in Delray Beach, three of nine Jewish retirees said they would vote against Obama if Mitt Romney were the nominee. Only one said she would vote for Gingrich over Obama.

“Romney is the capitalist and the businessman we need now to get this economy in order,” said Jack Davidson, 80, a Republican who voted for John McCain in 2008, as he sat in the card room at the community’s clubhouse. And while Davidson allowed that Gingrich is “brilliant,” he said he wouldn’t vote for him. “He’s nasty, in my mind. I don’t like nasty guys.”

Davidson doesn’t vote in Florida. But his views were shared by other moderate Republicans and disaffected Democrats interviewed by the Forward before and after Gingrich’s dramatic win in the January 21 South Carolina primary.

Jewish voters didn’t see much difference between Gingrich and Romney on issues relating to Israel. And they expressed faith in Romney’s ability to fix the economy while raising concerns about Gingrich’s character and temperament.

“I’m probably going to vote for Romney, because I think that the label they are pasting on him as being moderate is probably good,” said Adele Lurie, 68, a retired realtor, registered Florida Republican and year-round resident of Huntington Pointe. “I think that the problems that we have need solving, and I don’t see in any of the other candidates the ability to do that.”

Florida’s population is 3.4% Jewish, more than any other swing state. Nearly half a million Jews are expected to vote in the general election. Much of that population is made up of elderly retirees clustered in Broward and Palm Beach counties. Those voters likely won’t be a deciding factor in the Republican primary here on January 31, since most are registered Democrats and Florida’s primaries are open only to registered party members.

But Democrats and Republicans agree that a significant hit to Obama’s Jewish base in Florida could hurt the president’s chances in the state, and in the election overall.

“Part of winning this battleground state is reaching out to the Jewish Democrats and independents,” said Ned Siegel, the Romney campaign’s national Jewish outreach chair and a major Republican donor. Siegel, who served as ambassador to the Bahamas during George W. Bush’s administration, has a collection of elephant figurines in his Boca Raton real estate development office and a mezuza on the door.

“You get the Jewish vote, it changes the result,” Siegel said. “In a close election, it’s the difference.”

Florida Republicans feel they are gaining traction among the state’s Jews, who heavily favored Hillary Clinton over Obama in the 2008 Democratic primary, according to exit polls. Clinton won that primary, and Obama squeezed out a 3% victory in the general election.

The Obama campaign is fighting back in the contested state. The campaign has nine offices in Florida, is opening an additional office in Boca Raton in January, and is holding Jewish outreach events and training for volunteers in the area.

“We’re taking nothing for granted in reaching out to our base vote,” said Debbie Wasserman Schultz, the Florida congresswoman who is chair of the Democratic National Committee and a key South Florida Obama surrogate.

But in the race for the Jewish vote, all Republicans may not be equal.

Backed by billionaire casino mogul Sheldon Adelson, Gingrich has worked to attract Jewish support for his campaign. The Republican Jewish Coalition’s Florida Region will host a Gingrich event in Delray Beach on January 27. Gingrich has surged to the top of the Republican field in recent days, leading Romney by 7% in Florida and even beating Romney in some national polls.

Gingrich supporters say that their candidate will appeal to Jewish voters as the most supportive of Israel among the Republican hopefuls. “He’s the most pro-Israel Republican in the race,” said Steven Abrams, the Gingrich campaign’s chairman for Palm Beach County and an elected county commissioner. “Palestinians are an invented people?” Abrams said, referring to a much cited charge made by Gingrich late last year. “Can’t get more pro-Israel than that.”

Israel advocates have praised both Gingrich and fellow GOP candidate Rick Santorum for their legislative work during their respective terms in Washington. “In particular, the people who have done the most… on U.S.-Israel relations, not only who have talked beautifully… you have a guy like Gingrich and a guy like Santorum, two candidates who have been extraordinary on our issue when they were in office,” said Ben Chouake, president of NORPAC, a political action committee dealing with relations between the United States and Israel.

But some Republicans said that they saw no space among Romney, Gingrich and Santorum on Israel. “All three of them would move Israel past the existential threat that Barack Obama represents,” said Dinerstein, who has not endorsed any of the candidates.

In conversations with the Forward, Florida Jews who described themselves as disaffected toward Obama often cited concerns over his administration’s policy toward Israel. But they drew a sharp line among the Republican hopefuls.

“I have heard people say they would vote for Romney but not Gingrich or Santorum, because their politics appear to be too extreme,” said Rabbi David Steinhardt, leader of Boca Raton’s B’nai Torah Congregation, a Conservative synagogue.

Jewish voters broadly cited the economy as among the most important issues influencing their vote. Though South Floridian Jews are older and often retired, some said they would vote based on the economic interests of their children. Most said that they weren’t concerned about losing Medicare or Social Security benefits.

“We have pensions and Medicare, and we don’t have to worry,” said Marilyn Riederman, 72, Obama supporter and full-time Delray Beach resident. “My children may have to worry; my grandchildren certainly are going to have to worry.”

On the economy, Romney seemed to come out ahead among Jews who are considering voting for Republicans.

“The first thing in the Jewish community is the economy,” Siegel said. “The real issue amongst Jews is who can fix the economy the best, the businessman or the historian.”

Jewish Republicans are generally less conservative than the bulk of the party on social issues. And though there were some Jews at a Coral Springs rally for Santorum, who made his name as an opponent of abortion and same-sex marriage, his support in the Jewish community seems thin.

Santorum “seems to have concentrated solely on social issues and is irrational on foreign policy,” said Cyrus Cowen, 73, a Delray Beach resident and a Democrat considering a vote for Romney. Cowen said that he opposed Santorum’s support for a continued American presence in Iraq.

As she left a morning service at B’nai Torah, Arline Rein, 71, said that she planned to vote for a Republican in the general election. But Rein, who winters in Florida and votes in Michigan, has problems with Gingrich’s character. She particularly doesn’t like Gingrich’s wife, Callista. “She was obviously the mistress,” Rein said.

Rein’s concerns were echoed by other older Jewish women, many of whom cited recent claims by Gingrich’s second wife that the former speaker of the House had asked for an “open marriage” in order to carry on an affair with Callista.

Some Jewish Republicans were unenthusiastic about the entire primary field. “You have to hold your nose,” said Micki Kaufman, a resident of Rye, N.Y., and Boca Raton. Kaufman, attending a Kiddush after Friday night services at Congregation B’nai Israel, a Boca Raton Reform synagogue, expressed deep displeasure with Obama. But she wished the Republicans had come up with a different sort of challenger.

Romney, Maybe. Gingrich, No Thanks