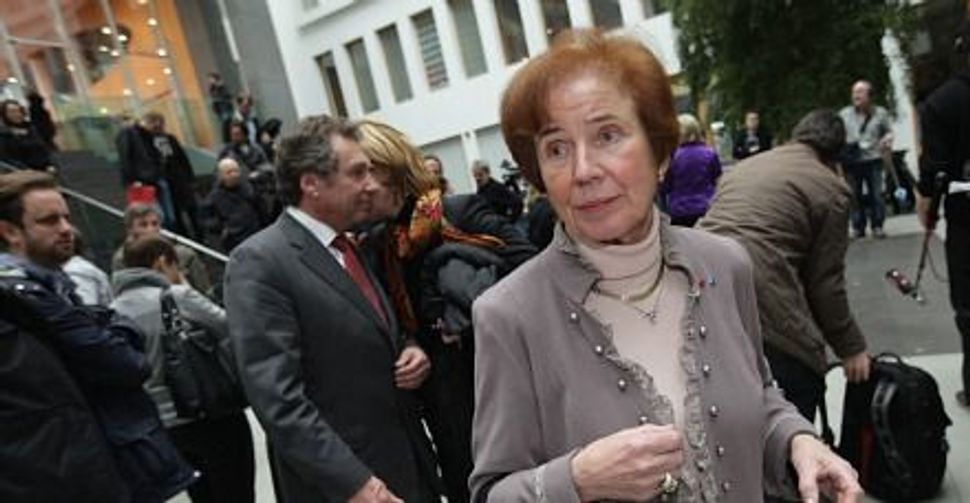 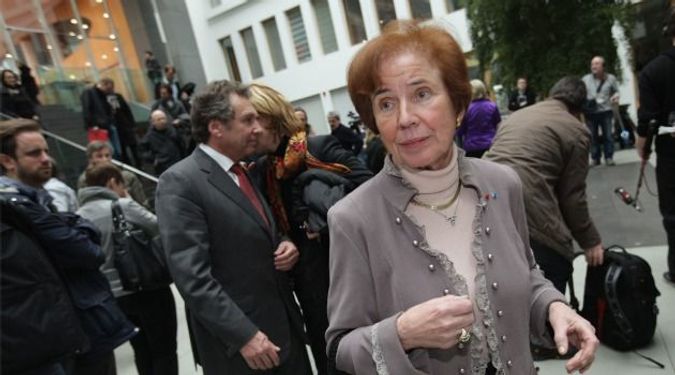 Nazi Hunter President: Beate Klarsfeld has forged a name for herself as a fearless Nazi hunter, one whose achievements include bringing to justice Klaus Barbie. Now she is mounting long shot campaign to become president of Germany, with backing from the formerly communist Left Party. Image by getty images

Over decades, together with her husband, Serge Klarsfeld, Beate Klarsfeld has forged a name for herself as a fearless Nazi hunter, one whose achievements include bringing to justice Klaus Barbie, the so-called “Butcher of Lyon.” During this time, she has also been a staunch defender of Israel.

But today, Klarsfeld is engaged in quite a different, seemingly quixotic campaign: running for the presidency of Germany under the auspices of the Left Party, the modern-day incarnation of the East German Communist Party and the only parliamentary faction in today’s unified Germany to take a stance strongly critical of Israel.

“You will say, why Die Linke?” Klarsfeld told the Forward, referring to the party by its German name. “But it’s the party that has the most sympathy for my work.”

Klarsfeld’s decision to stand as the Left Party’s candidate for president of Germany has raised eyebrows across the political spectrum. Other than the party’s nomination of Klarsfeld for the Federal Cross, the two don’t have much of a prior relationship. But Klarsfeld expressed enthusiasm for the Left Party’s staunch anti-fascism. “The work of Serge is mainly to remember the victims of Nazism, and this is a part of the party, too,” she said.

During her career, Klarsfeld has found that others in Germany and elsewhere in the West were sometimes much less supportive. In fact, her insistence on pursuing Nazi war criminals comfortably ensconced in powerful post-war positions has often won her nothing but scorn.

Beate and Serge Klarsfeld are perhaps best known for locating and identifying Barbie in 1972. The couple found Barbie, who shipped off 842 people — mainly Jews — to German concentration camps, living under a false identity in Bolivia. Barbie, who had been chief of the Gestapo in Lyon, worked in Bolivia as a paid informant for the West German intelligence service, the BND. In 2001, Robert Wolfe, a historian for the U.S. National Archives’ congressionally mandated research group into the Nazi era, found that Barbie’s escape to Bolivia was organized in 1951 by the U.S. Army Counter Intelligence Corps, which employed him after World War II for his purported anti-communist expertise.

The Klarsfelds were also instrumental in bringing to justice, among others, René Bousquet, a high-ranking French civil servant who was later close to French President François Mitterrand, and Maurice Papon, a French civil servant, industrial leader and postwar Gaullist politician who was convicted for crimes against humanity for his role in deporting more than 1,600 Jews to concentration camps during World War II.

Klarsfeld, a Lutheran, was born and reared in Germany, unlike her husband, a Jewish immigrant from Romania. She said that her life’s work has been motivated by her personal feelings “as a German who has a moral responsibility to assume,” as someone born on the eve of World War II and the Holocaust.

The upcoming election follows German President Christian Wulff’s sudden resignation in February over a scandal involving inappropriate gifts he is said to have received while in office. The German presidency, a mostly ceremonial post, is endowed with little political power. The president is instead a symbol of the country’s moral compass. The German people do not elect their president, who is voted in by a special assembly made up of members of parliament and of delegates from Germany’s 16 regional states.

The Left Party, the smallest faction in Germany’s parliament, decided to run its own candidate after Chancellor Angela Merkel excluded it from a meeting to discuss finding a successor to Wulff. The party announced Klarsfeld as its candidate February 27.

Some of Klarsfeld’s political views, such as her pro-Israel stance and support of French President Nicolas Sarkozy’s conservative government, put her at odds with the mainstream of the Left Party. But Klarsfeld argued that her pro-Israel views, while perhaps out of sync with some in the Left Party, are suited to the office of the president. “My engagement [on behalf of] Israel is very well known,” she said. “The German president generally has a moral voice, so you don’t have to influence parties.”

Left Party members have, in the past, made news with critical statements about Israel. Last year, Left Party MP Inge Höger, who was aboard the Mavi Marmara flotilla that attempted to break the blockade of Gaza in 2010, criticized Israel for targeting and “eliminating” influential activists in the Palestinian Territories. Other factions of the party have supported calls for boycotts and divestments from Israel.

Last year, the Left Party’s Duisburg chapter featured a swastika entangled with a Jewish Star on its website, an image that linked to a site that called for a boycott of Israeli goods, according to the English online edition of Der Spiegel magazine. In response, the Left Party’s Gregor Gysi passed a controversial resolution stating his party “will no longer participate in boycotts of Israeli products, will refrain from demanding a single-state solution to the Middle East conflict and will not take part in this year’s Gaza flotilla.”

Klarsfeld is widely expected to lose to Joachim Gauck, a former East German rights activist who is the consensus candidate, when the election takes place March 18. She was gracious to her opponent, explaining that Germany had two “symbolic candidates” to choose from. But she contended that her work and legacy were more significant. “Compared to Mr. Gauck, who was fighting in the German Democratic Republic for human rights, I was fighting in West Germany against Nazi criminals,” she said. “I’ve been all over the world to chase Nazi criminals, so my image is much larger.”

In early March, East German writer and dissident Lutz Rathenow denounced Klarsfeld as a former contact for the Stasi, the East German secret police, reiterating an accusation that was made against Klarsfeld and her husband by two former Stasi officers in 1991. Voicing outrage over the Left Party’s nomination, Rathenow told the Tagesspiegel newspaper that although Klarsfeld did not spy on or inform on others to the agency, she repeatedly received materials from the East German intelligence and security service.

In a February 29 press conference, Klarsfeld, far from denying that she was a Stasi contact, defended her relationship with the agency as crucial to her work. Klarsfeld, who has gone to prison for her protests against alleged post-war governmental Nazi cover-ups in both West Germany and in the Eastern Bloc, said that her relationship to both Germanys was “very stormy” and that she was “always under surveillance.” She claimed that when East Germany offered to open its archives on Nazi criminals to her, she accepted in order to pressure former Nazis in both Eastern and Western Europe.

“She is not a real politician,” explained Nils Diederich, a political scientist at Berlin’s Free University. “But she is a figure with symbolic meaning. She was nominated because she was involved against Nazis. … And this is why she is known in Germany.”

Diederich said that Klarsfeld was not widely known to ordinary Germans before her nomination but is well regarded by politicians, academics and historians. “This doesn’t mean that she will have many votes in the assembly,” he said.

Klarsfeld herself seems realistic about her chances. But possible outcome aside, she appears to be flattered by the attention she is suddenly receiving in the land of her birth. For Klarsfeld, the central issue seems to be the recognition bestowed on her by the party’s nomination. “It enlarges the importance of my work,” she said, smiling.