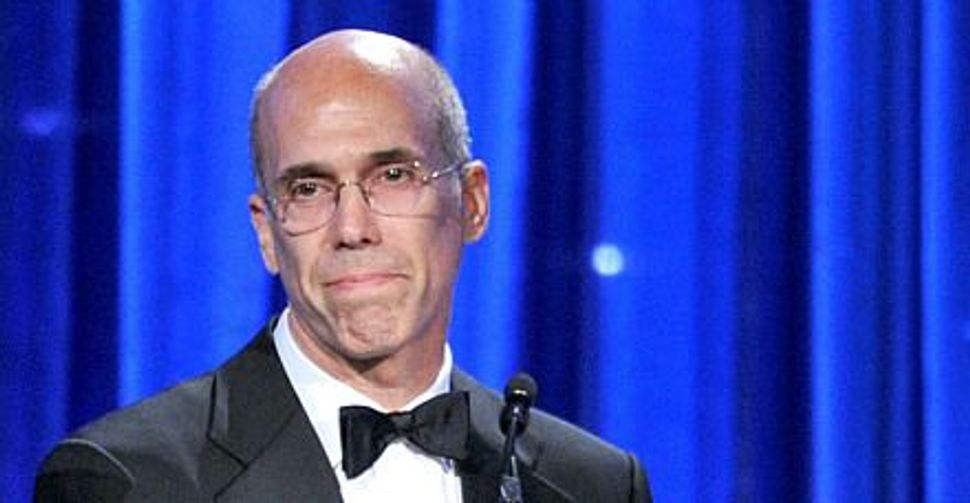 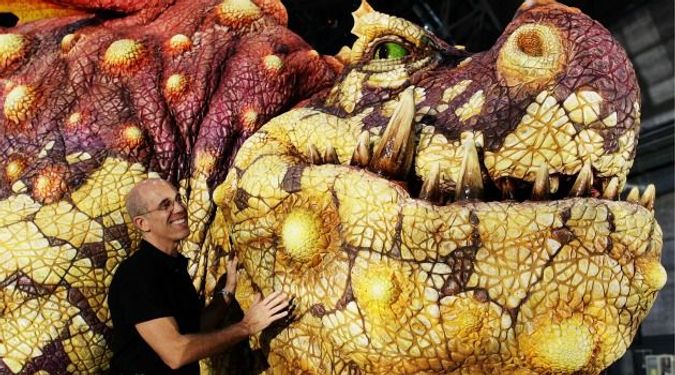 He Has DreamWorks: Movie mogul Jeffrey Katzenberg has emerged as President Obama?s main man in Hollywood. Image by getty images

When DreamWorks Animation CEO Jeffrey Katzenberg was 21, he handled the finances for John Lindsay’s New York City mayoral campaign. Literally, that meant carrying a briefcase full of thousands of dollars around the city and paying expenses as they arose.

Katzenberg is reprising his role as a campaign moneyman this year, albeit on a somewhat different scale. In 2012, the Jewish movie mogul’s political giving in support of Obama’s re-election is on a level practically unequaled among Democratic donors.

If Newt Gingrich has gambling and Mitt Romney has private equity, Obama has Hollywood. And in Hollywood, Obama has no more important supporters than Katzenberg and his former DreamWorks partner David Geffen.

This spring, Katzenberg might be the best hope for Obama’s struggling super PAC to catch up with its Republican rivals — much in the same way that Geffen boosted the Obama campaign in 2007 as its highest-profile Clinton defector.

And while Geffen has assumed a less active role this electoral cycle, taken together the two Jewish billionaires have been among the most important backers of the Obama presidency.

Before they were members of the elite circle of top Obama supporters, however, the DreamWorks men were major donors to Bill and Hillary Rodham Clinton, and even friends of the first couple. Bill Clinton visited both Katzenberg’s and Geffen’s houses. The decision to found DreamWorks was made after a dinner at the Clinton White House, attended by Geffen, Katzenberg, their partner Steven Spielberg, and Russian President Boris Yeltsin, according to a 1998 New Yorker profile of Geffen. Geffen spent that night in the Lincoln Bedroom.

Founded with great fanfare in 1994, DreamWorks represented a sort of Jewish Hollywood supergroup. Among its first big films was “The Prince of Egypt,” an animated retelling of the Exodus story. Spielberg, director of such classics as “Jaws” and “Jurassic Park,” is perhaps the most identifiably Jewish of the executive trio. His various foundations are major supporters of Jewish causes. But Katzenberg serves on the board of the Simon Wiesenthal Center and has given to other Jewish organizations, and both Katzenberg and Spielberg had some of their foundations’ funds invested with Bernard Madoff, the massive fraudster who preyed largely on Jews.

Geffen, for his part, was born to immigrant Jewish parents and grew up in the Brooklyn neighborhood of Boro Park. He went on to represent some of the biggest names in music, founding Asylum Records and Geffen Records before turning to film.

That frustration became public in February 2007, when Hillary Clinton’s presidential campaign woke to a startling attack. Geffen had told New York Times columnist Maureen Dowd exactly what it was that he didn’t like about Hillary and Bill.

“Everybody in politics lies, but [the Clintons] do it with such ease, it’s troubling,” Geffen explained.

In the interview, Geffen expressed particular revulsion at the idea of a Clinton dynasty. “I’m tired of hearing James Carville on television,” Geffen said, referring to the omnipresent Clinton political adviser.

Katzenberg’s eventual move toward Obama seems less a matter of fury than it does the culmination of a lifelong trajectory: The former Disney executive has a history of falling for bright young politicians.

Born to a wealthy New York City Jewish family, Katzenberg attended the Ethical Culture Fieldston School, a private New York prep school with a strong contingent of secular Jews. He was in a class a few years ahead of Jill Abramson, executive editor of The New York Times. In 1965, Katzenberg was kicked out of summer camp for gambling, he says for M&M’s. Returning home, he volunteered on the first mayoral campaign of Lindsay, a liberal Republican in the Rockefeller mold.

A charismatic and idealistic young congressman, Lindsay ran for mayor on a progressive platform that won over young New York Jews like Katzenberg. In an interview for a 2010 public television documentary about Lindsay’s mayoralty, Katzenberg drew a connection between Lindsay and Obama. “I think that those early Lindsay years were ones of extreme exuberance and very much about hope, and about engagement and change,” Katzenberg said. “All the things that we hear today were things that he represented in 1965.”

Katzenberg continued working for Lindsay through high school. “If you needed six cups of coffee at 3 in the morning, Squirt could get them,” Lindsay told The New York Times in 1988.

It’s likely politicos don’t call the slender, bald Katzenberg “squirt” any longer. Since the beginning of 2010, Katzenberg has made $2.1 million in political donations, all of it to Democratic causes. His $2 million donation to Priorities USA Action, the pro-Obama super PAC, accounts for one-third of all contributions received by the group. His is also the largest contribution to a Democratic-leaning super PAC, and he’s a top-tier bundler for the Obama campaign itself.

“Mr. Katzenberg contributed to Priorities USA as an expression of his concern over the attempted hijacking of the elections by Karl Rove, the Koch Bros., and extreme right wing special interest money,” wrote Andy Spahn, Katzenberg’s political adviser, in an email. Spahn is a former DreamWorks executive and an Obama bundler.

Katzenberg himself did not respond to a request to be interviewed for this story. Spielberg, who has given $100,000 to the pro-Obama super PAC and who is currently editing a movie about Abraham Lincoln, also could not be reached.

DreamWorks split in 2004. Katzenberg took DreamWorks Animation, a publicly traded firm that is now the largest animation studio in the world. Geffen and Spielberg remained to helm DreamWorks Studios, a privately owned company that specializes in live-action films.

Geffen left DreamWorks in 2008, just before that year’s November election. He now owns two of the 20 largest yachts in the world and reportedly spends less and less time in Hollywood. He acquired the newer yacht, a $300 million ship called the Pelorus, from the ex-wife of Russian businessman Roman Abramovich in 2011.

Meanwhile, both DreamWorks Studios and DreamWorks Animation are facing business troubles. Spielberg’s Studios is seeking new financing in a tough market, while share values in Katzenberg’s Animation are down 30% over the past year.

The trio also has some cause to be frustrated with the Obama administration. Much of Hollywood was miffed when the administration issued a statement in early January that expressed some reservations about the Stop Online Piracy Act, a movie industry-backed piece of legislation that was intended to protect intellectual property on the Internet. The legislation eventually fell in the face of grassroots protest. Insiders and industry publications say that Hollywood had hoped the administration would step in to back the proposed law.

DreamWorks Animation is not a member of the Motion Picture Association of America, the leading trade group, but the Hollywood Reporter said that MPAA President Chris Dodd, a former senator from Connecticut, tried to use Katzenberg as a conduit to the White House during the crisis.

And though Geffen is no longer running a studio, he also has well-known political interests that have not been entirely fulfilled by the Obama administration. A prominent supporter of same-sex marriage, Geffen is a primary backer of the legal effort to overturn California’s Proposition 8, which barred same-sex marriage in the state. Though the Obama administration has reversed Don’t Ask, Don’t Tell, which effectively barred gay men and lesbians from serving openly in the military, and has said it won’t back the Defense of Marriage Act in court, gay rights activists remain frustrated that the president has not openly stated that he is in favor of same-sex marriage.

Geffen is not thought to be actively holding back from funding Obama, and a spokesman said that he remained an Obama supporter. But he is the only top-tier Jewish Obama bundler from 2008 not to be fundraising for the president’s re-election in 2012, and he has not donated to the pro-Obama super PAC.

Still, Katzenberg appears to be taking up the slack. In addition to raising money for the campaign, Katzenberg hosted a March event for the pro-Obama super PAC and seems key to its future.

Priorities USA Action has raised only $6 million as of the latest filings, putting it $12 million behind Gingrich’s super PAC and a startling $37 million behind Romney’s super PAC. The pro-Obama super PAC did not respond to a request for comment.

The March event, attended by top White House aide David Plouffe, was intended to drum up Hollywood support for the committee. Plouffe’s presence suggests that the Obama team is banking heavily on the effort.