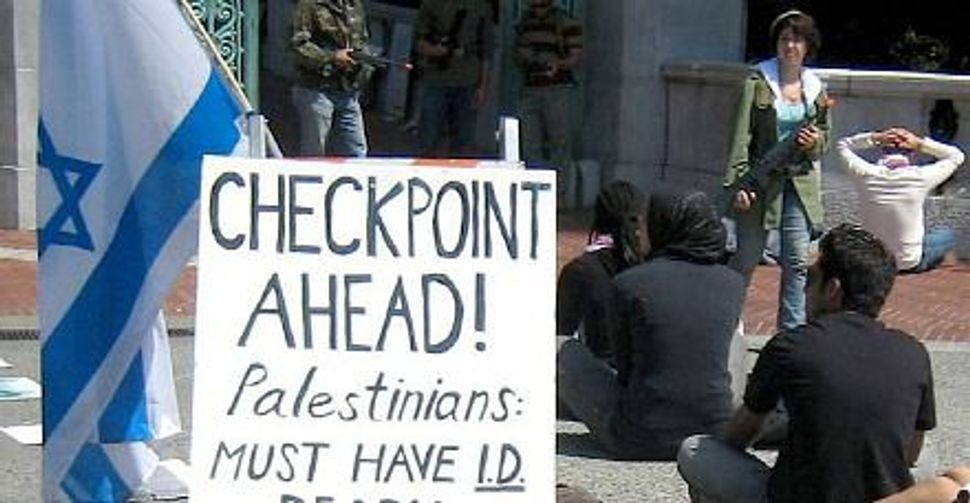 Image by Courtesy of joel siegal 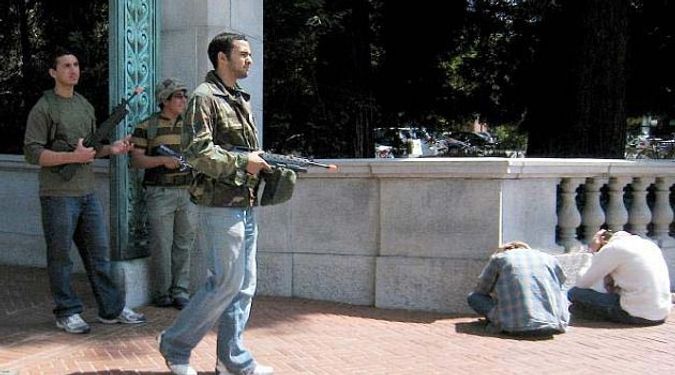 Harassment?: Some Jewish groups say that anti-Israel protests, such as this mock Israeli checkpoint at the University of California, Berkeley, violate Jewish students? civil rights. Image by Courtesy of joel siegal

With Jewish leaders poised to call for a restrained approach to the use of federal civil rights law for disputes on college campuses, one group is pushing the community to take a more aggressive role toward Jewish student complaints.

The Jewish Community Relations Council of Northern New Jersey has submitted a proposal to the Jewish Council for Public Affairs that urges the community to vigorously support claims of campus anti-Semitism, which have often come up in the context of anti-Israel activities.

The resolution will be voted on at the JCPA’s annual plenum, held in Detroit on May 5-8. It challenges the JCPA’s own policy paper, which emphasizes respect for free speech and urges a careful approach in applying civil rights law to disputes involving Jewish students.

The competing resolutions paint a nuanced picture of the disagreement that has been roiling American Jewish leadership over the past year and a half, since the Department of Education’s Office of Civil Rights extended Title VI of the 1964 Civil Rights Act to effectively include Jewish students.

The dispute pits those who advocate for a vigorous application of civil rights law to quash anti-Semitism against leaders who worry that this approach might backfire against Jewish students if they are seen as silencing free speech on the topic of Israel.

Instead, the resolution urges the communal relations field to educate Jewish students about their newfound rights under the law.

The JCRC resolution was created with the input of Susan Tuchman, a member of its board who is also the legal director at the Zionist Organization of America. The ZOA was instrumental in getting Title VI extended to Jewish students, and it has filed Title VI complaints at Rutgers University and University of California, Irvine.

Like most of the Title VI complaints filed by Jewish students, the ZOA complaints allege that anti-Israel activities turned into anti-Semitic harassment. Others believe that the events, while perhaps distasteful, in no way amount to threats to students’ civil rights.

Tuchman said that the JCRC’s position met the ZOA’s standards. “The resolution should praise the new legal policy protecting Jewish students and should be a commitment to enshrining the policy into actual law,” she said. “This is as far as we think a resolution should be necessary.”

The JCPA’s proposal, on the other hand, creates a much tighter standard for the appropriate use of Title VI, saying that it is warranted only when there is a “toxic” environment on campus, featuring “intimidation, violence or threats of violence” that go unanswered by school administrators.

“Lawsuits and threats of legal action,” the JCPA resolution reads, “may be warranted to redress a systematic climate of fear and intimidation which a university administration has failed to address promptly with reasonable corrective measures.”

The JCPA proposal warns against using Title VI to crack down on free speech of pro-Palestinian groups or other activists. The law should not be used to “promote a ‘politically correct’ environment in which legitimate debate about the Israeli-Palestinian conflict is squelched and academic freedom is undermined,” the measure notes.

“It could chill free speech on campuses,” explained Gerald Greiman, co-chair of the JCPA’s Task Force on Jewish Security and the Bill of Rights, which co-wrote the resolution. “We think inappropriate use could produce a backlash against the Jewish students.”

The JCPA bullet point on “politically correct” speech seems to have engendered some controversy among JCPA members, with communal leaders from Detroit and a different New Jersey group requesting its removal from the proposal. “Our committee members felt that if we were going to call for the use of Title VI, we should call in a strong, straightforward manner,” said Melanie Gorelick, director of the Community Relations Committee of the United Jewish Communities of MetroWest and Central New Jersey.

Communal leaders from New Haven, Conn. and San Francisco, on the other hand, asked for amendments to the JCPA resolution that would further water it down. They advised Jewish officials to call on Title VI to protect all religious and ethnic groups, not just Jews, and advocate the use of Title VI only as a last resort.

The JCPA resolution and the Northern New Jersey resolution sometimes offered granular differences on their approach to Title VI. For instance, the JCPA urges the communal relations field to distinguish between free speech on the one hand and conduct that is “so severe, pervasive and objectively offensive that it deprives a student of access to the benefits or opportunities provided by the school”

Meanwhile, the New Jersey JCRC advocates for Jewish community leaders to simply “help campus leaders to understand as well as educate others about the rights and remedies under Title VI.”

Both the JCPA and the JCRC advocate for the new definition of Title VI to be enshrined in federal law. In October 2010, Title VI was redefined to include religious groups on the basis of “shared ethnic characteristics” in a letter from the Department of Education’s assistant secretary of civil rights, Russlynn Ali.

The two resolutions are expected to be voted upon on May 5, along with several other communal resolutions on collective bargaining in the public sector, inequality in education at public schools, gender segregation in Israel and hydraulic fracturing.