Charles Hynes Fires Back at Critics and Brooklyn Orthodox Leaders 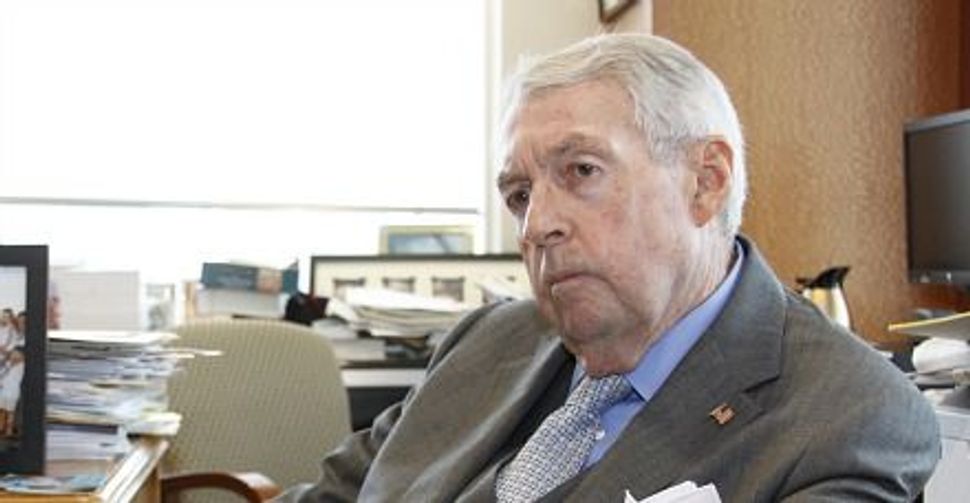 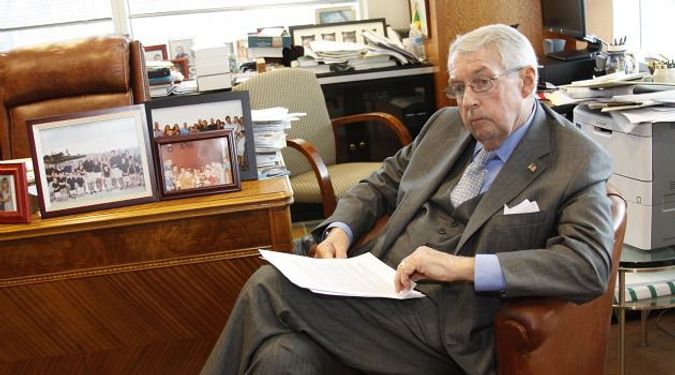 Firing Back: Sensing his legacy at stake, Brooklyn District Attorney Charles Hynes fired back at critics in a landmark extensive interview. Image by shulamit seidler-feller

Brooklyn’s embattled district attorney Charles Hynes sharply criticized an ultra-Orthodox umbrella group and launched a fierce defense of his record in prosecuting child sex abuse during a landmark interview with the Forward.

Sitting in the 14th floor corner office of his downtown Brooklyn headquarters, Hynes said he was in “sharp disagreement” with Agudath Israel of America’s policy that a rabbi “who has experience in the area of abuse and molestation” must be consulted before suspected abusers can be reported to the authorities.

Hynes said the policy is misguided because rabbis “have no experience or expertise in sex abuse.” He said that he had underlined his opposition to rabbis screening allegations during a telephone call with Rabbi David Zwiebel, Agudah’s executive vice president, earlier on the morning of the May 24 interview.

“(Zwiebel) still thinks they have a responsibility to screen,” Hynes said, “I disagree.”

Hynes says he is pushing for a new state law requiring rabbis to report abuse. Lawmakers question his timing.

The veteran prosecutor took the remarkable step of speaking directly to the Jewish community through the Forward after months of mounting criticism over his office’s handling of child sex crimes in the Orthodox community.

The consummate Irish-American politician sought to underline his affinity for the community by peppering the interview with Yiddish phrases and Jewish expressions.

But the white-haired Hynes seemed weary at the toll the criticism has taken. He also seemed frustrated that his legacy could be permanently tarnished by the issue, especially his stubborn refusal to release the names of almost 100 ultra-Orthodox Jews charged with child sex crimes since 2009.

“I won’t buckle to repeated attacks on my integrity because people are so hellbent on finding every bit of information they can,” Hynes said.

The interview came at perhaps the most tumultuous moment of Hynes four-decade career as a prosecutor. Brooklyn-bred and the product of Roman Catholic schools, he won his name by cracking down on fraud in government medical programs. As a special prosecutor, he famously won convictions in the explosive case of several white men who chased a black man to his death in the Howard Beach neighborhood in 1986.

After — by his own admission — almost two decades of failing to adequately prosecute sex abuse in the ultra-Orthodox community, Hynes set up a special program called Kol Tzedek, which means “Voice of Justice,” in 2009. Hynes claims to have brought 99 cases as a direct result of the program. 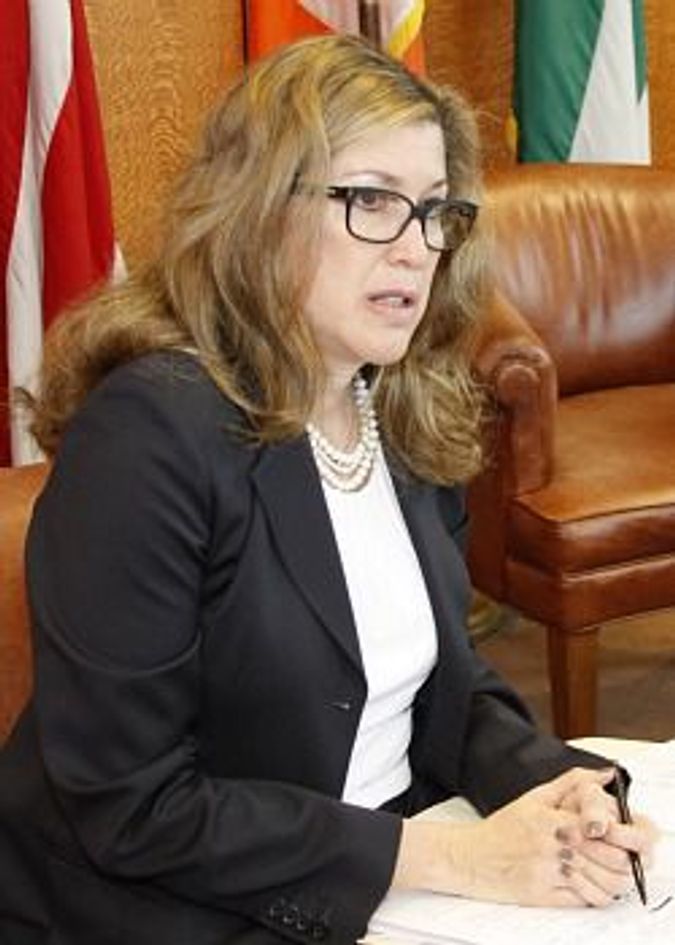 His refusal to name the people charged in those cases, plus his apparent tacit support of Agudah’s stringent policy on reporting crimes, led him into a hornet’s nest of criticism. Jewish publications, including this paper, have repeatedly hammered him over the issue. A recent series in the New York Times redoubled the pressure.

Zwiebel says that when he met with Hynes last year to discuss rabbinic involvement in the reporting process, Hynes did not find anything about the consultation process that was “inconsistent with the standards of secular law.”

But Hynes said he told Zwiebel that “advising rabbis to screen sex abuse is a mistake” not just because they have no expertise in the matter.

He also underlined that rabbis, or anyone else, who shield abusers, could face criminal charges. He added, however, that because there is no law stopping a person consulting their pastor he had “no authority to object.”

The post of district attorney is an elected position and Hynes has won lopsided electoral victories since taking office in 1989. Hynes’s seemingly cozy relationship with Orthodox leaders has led critics, including survivor advocates and legal specialists, to accuse the DA of tacitly supporting rabbinic involvement in return for the community’s block vote.

Hynes countered that it was “madness” to infer that he is “advising rabbis not to send information” to the authorities. He pointed to his memorandum of understanding with the Catholic Church that mandates priests must report abuse.

“Why in the name of God would I… then do it a different way with Orthodox Jews?” he asked.

He mocked critics who claimed he was beholden to Orthodox Jewish leaders, calling them ‘Alice in Wonderland.’

“Well I have a helluva way of showing my gratitude, don’t I, with 99 prosecutions,” he sharply remarked.

The prohibition in Jewish law against informing on a fellow Jew to the authorities, known as mesirah, is central to the issue of reporting abuse for ultra-Orthodox Jews.

Agudath Israel’s officials believe they made progress last year when they announced mesirah does not always apply in cases of suspected child abuse.

That declaration came with the major caveat that ultra-Orthodox Jews should consult a rabbi who can assess whether their suspicions are reasonable before they may contact authorities.

The only exception is in cases where a person is a victim of abuse or has witnessed abuse. Under such conditions, a parent whose child claims to have been abused would have to seek advice from a rabbi before contacting police. So too would an ultra-Orthodox teacher or social worker, who are mandated to report suspected abuse to authorities under New York State law.

Hynes, who was flanked in the interview by the chief of his sex crimes unit, Rhonnie Jaus, also forcefully defended his policy of not releasing the names of adults charged in sex abuse cases involving members of the ultra-Orthodox.

The majority of those cases involve ultra-Orthodox adults charged with sex crimes, though in some cases the defendants are members of the non-Jewish community who targeted ultra-Orthodox children.

Hynes’s office refuses to release even the names of people who have pled guilty to or been convicted of sex abuse charges, including 18 people who have registered or who will have to register as sex offenders.

Hynes claims that because of the “tight-knit and insular nature” of the ultra-Orthodox community, revealing the identity of the defendant in each case will almost certainly reveal the identity of victims. He says that if ultra-Orthodox victims believe there is a risk that they will be named, his entire Kol Tzedek program will break down.

The policy has been criticized by victims’ advocates and by legal specialists. Even Agudath Israel has objected to a blanket ban on releasing names of ultra-Orthodox defendants. But Hynes was defiant.

“I will not put victims at risk,” Hynes said.

Hynes admitted that he had been “completely unsuccessful” at combating abuse in the ultra-Orthodox community for his first 18 years in office. He said that the key aspect of reversing that record was guaranteeing the anonymity of victims by also keeping the names of suspected and convicted molesters secret.

“When we stopped identifying the defendant our production of cases… skyrocketed,” Hynes said.

He credited the Forward with recognizing his success in an article that revealed he has brought cases against far more Orthodox sex suspects than other prosecutors nationwide.

“You are the only one who has said this is the only office doing anything about this,” Hynes said.

Hynes’ claim that Kol Tzedek is directly responsible for his successes has been forcefully challenged by the New York Jewish Week and by the New York Times. Both newspapers found evidence that Hynes includes prosecutions in his list of successes that either began before Kol Tzedek started or that involved members of the non-Jewish community.

Jaus said that her office’s position had been distorted. She insisted that she never claimed all the cases came through Kol Tzedek or involved only ultra-Orthodox perpetrators. Instead, she said each one used Kol Tzedek’s resources — such as a culturally-sensitive social workers or assistant district attorneys — to “bring the cases in and to maintain the cooperation of the victim, which is very difficult.”

Hynes and Jaus repeatedly underlined how hard it was to get ultra-Orthodox victims to come forward and to maintain their cooperation.

Hynes called members of the community “relentless pursuers” of the identity of victims.

“Within days after getting the name of a defendant in a sex abuse case the poor victim was outed and then immediately harassed and intimidated,” Hynes said.

Hynes announced recently that he will set up a panel of law enforcement officials to look into ways of combating intimidation. But he said that until now, victims’ families have been too scared to wear a wire. He said that alleged cases of intimidation brought to him by victims’ advocates contained insufficient evidence to mount a criminal case.

Meanwhile, Hynes said victims were “scared to death.” Families who bring cases are threatened with exclusion from synagogue and their children being thrown out of school. Because “victims feel trapped” in the community, Hynes said they often believe they have no choice but to drop their case.

Jaus said that even in cases of non-Jewish perpetrators, the stigma of abuse is too great for families to risk coming forward. She pointed to cases of a 4-year-old and a 14-year-old, both girls, who were abducted and sexually assaulted a few years ago.

Jaus said her office recently identified the non-Jewish perpetrator from a DNA database, but neither family would allow their daughter to testify.

“They won’t be able to arrange a marriage, go to school, get into a camp,” Jaus said. “This is what we are up against.”

The Forward, along with several other media outlets, has filed a request under New York’s freedom of information law for the release of the names of all the accused related to the Kol Tzedek program. The DA’s office has denied those requests.

Asked how he would respond if organizations continue to press their freedom of information request, Hynes said he would obey the law.

“We are going to continue to object to it because of our concern for our victims,” he said. “If a court directs us to turn it over, gey gezunterheyt, then I’ll do it.”

Charles Hynes Fires Back at Critics and Brooklyn Orthodox Leaders