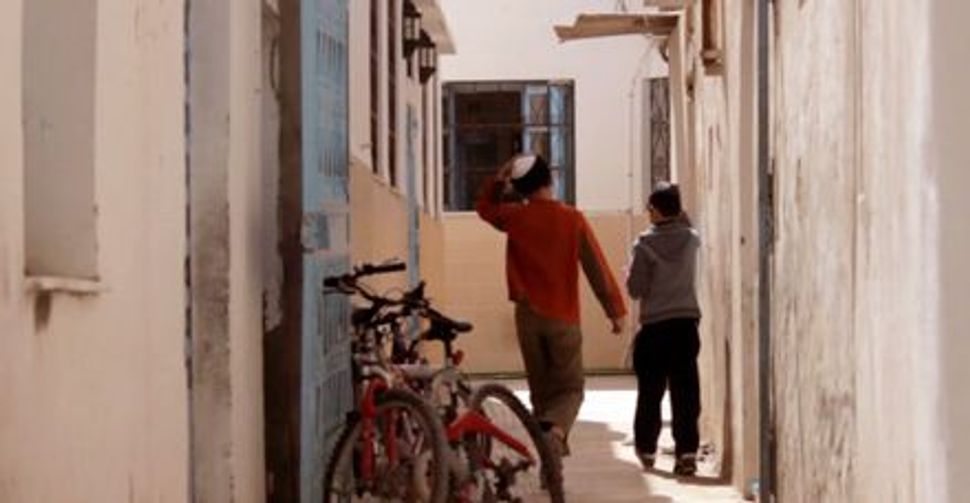 “You cannot find a better government than what we had,” said Roger Bismuth, who has held the title of president for more than 10 years. Bismuth extended his praise to all the ministers of Ben Ali’s political party, the Constitutional Democratic Rally, calling them “good technocrats,” but he said that the dictator and his family had “ruined the country” through fraud and mismanagement.

As Tunisia struggles to emerge from decades of dictatorship, just how well Bismuth is representing the consensus of the country’s small Jewish community may be an issue.

The revolution that overthrew Ben Ali in January 2011 provided the spark that set off the Arab Spring, which, through civil protest, toppled authoritarian governments in Egypt and Yemen. Today, the surge continues to course through the region — most notably in Syria, where, according to numerous reports, civil protests have been met with massacres by government forces. The massacres, in turn, have led to a downward spiral toward civil war.

The ultimate outcomes of the revolutions in Egypt and Yemen also remain in doubt. In both countries, civil protests continue to roil the streets and unresolved questions about the basic framework of post-dictatorship government continue to bedevil those jockeying for power. Just how democratic the final result will be, no one can yet say. 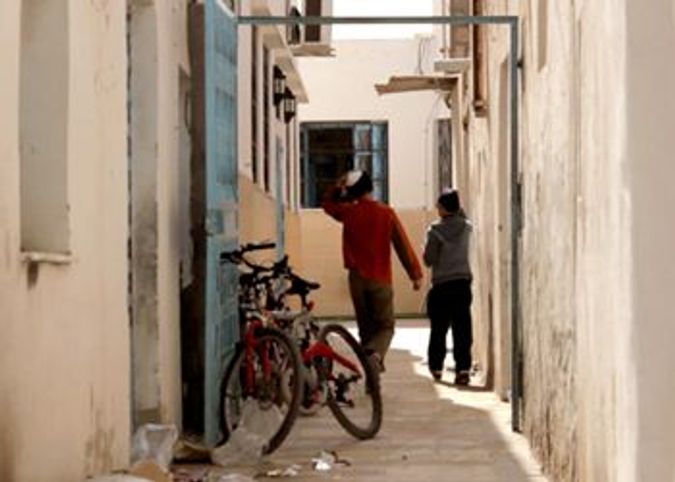 Jewish boys head home after school on the island of Djerba. Image by nate lavey

But in Tunisia, voters went to the polls last October and peacefully elected a constituent assembly in a competitive election hailed widely as free and fair. The major parties all accepted the results, in which the Ennahda Movement, a so far moderate Islamist party, won a plurality of the seats. In December the constituent assembly, which is also tasked with developing a new, post-dictatorship constitution, elected as president Moncef Marzouki, a longtime secular human rights activist who was imprisoned by Ben Ali.

The new order has affected Tunisia’s small community of some 1,500 Jews in a variety of ways. Among the urban elite, Bismuth’s sentiments are not unanimous, particularly among some younger members.

Jacob Lellouche, owner of a kosher restaurant in La Goulette, a suburb some seven miles from the capital, Tunis, said: “The last government — Mr. Ben Ali and his troop — instrumentalized the Jewish community to give a good picture of Tunisia outside. But here in Tunisia they said: ‘You are here, but be quiet. Don’t make any waves.’”

By “instrumentalize,” Lellouche said, he meant that Ben Ali pointed outsiders to his “protection” of Jews in Tunisia as evidence of his benevolence and a reason for Western governments to support his regime. But, Lellouche argues, Jews have lived in Tunisia for nearly 3,000 years, and though the Jewish population has declined greatly since World War II, there’s a sense that the strength of Jewish-Muslim relations owes more to individuals than to any state-imposed tolerance. 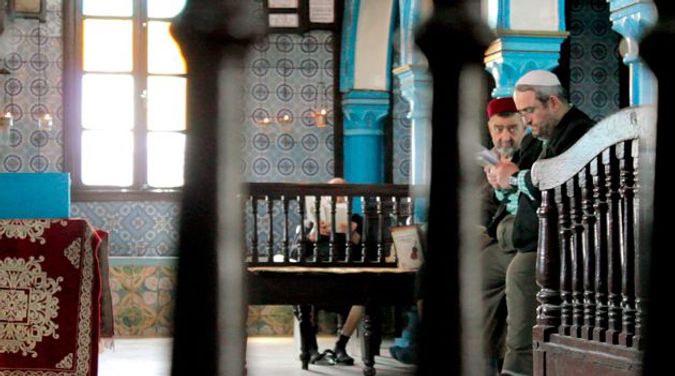 Men pray at the El Ghriba synagogue on Djerba. Image by nate lavey

The Jewish presence in Tunisia dates back at least to the Roman era. Since then, the community has survived and adapted to rulers ranging from the Muslim fundamentalist Almohade dynasty to the Spanish Inquisitors and the Nazis. Though Jews faced periods of persecution (alongside other minority groups), other Jews from Spain, Italy and elsewhere flocked to the country over the years and helped to grow the population. By 1942, the year the Nazis landed in Tunisia, the community was nearing its height of about 100,000. Five thousand of them were sent to labor camps, and 160 were sent to death camps.

After World War II, pressure from the newly independent government and increased tensions surrounding the establishment of Israel motivated many Jews to leave for France, the country’s former colonial master, or for Israel, leaving only the small community that exists today.

The largest Jewish community in Tunisia is the religiously observant group on the island of Djerba, some 200 miles from the capital. The community of about 1,000 benefits from the support of groups like the American Jewish Joint Distribution Committee, which has helped fund religious schools and other programs there.

Djerba’s Jews, who comprise the bulk of Tunisian Jewry, are geographically and culturally separated from the rest of the country. The revolution that overthrew the regime in Tunis and sparked the Arab Spring still seems far away. Residents said that they have seen little change in their relations with Muslims. 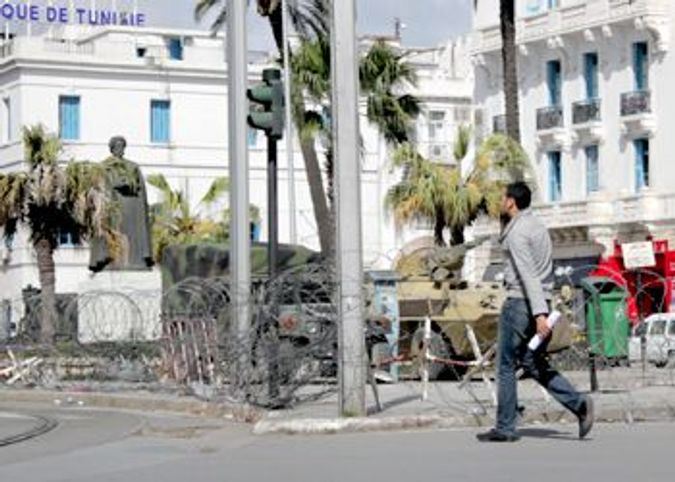 A man walks past a tank and armor vehicle surrounded by razor wire in downtown Tunis. Image by nate lavey

Standing in front of a motorcycle repair shop in the predominantly Jewish neighborhood of Hara Kebira, Ezekiel Haddad said: “Here things are totally calm. People are equal. Each one of us respects the other.” Haddad, a Jewish father of six, had stopped by the motorcycle shop to meet with its owner, a Muslim. Haddad said that though each group led separate religious lives, they conducted business together normally.

Hannah Sabban who teaches at an all-girls Jewish school, said that during the revolution, “there was a bit of a panic for everyone, but since then, things have remained the same.” Religious schools like the one at which Sabban teaches are principal recipients of aid from groups like the JDC. Though there seemed to be no tensions regarding this sort of international support, other shopkeepers in Hara Kebira said that under the Ben Ali regime, Jews were left alone, while Muslim businessmen faced occasional harassment from the police.

Disconnected as Djerba is from the mainland, one event — the annual spring celebration of the Jewish holiday Lag B’Omer — is often seen as a sort of bellwether for the status of religious tolerance in Tunisia. Last year, right after the revolution, only 100 Jewish pilgrims from outside the country made the trip to El Ghriba Synagogue, which plays host to the event, signaling that tourism and Arab-Jewish relations were uncertain at best.

This year, Youssef al-Qaradawi, a popular Islamist cleric from Qatar who has made statements condemned as anti-Semitic, was scheduled to visit the island just a few days before the Lag B’Omer celebrations. But the community was able to convince the government to relocate his rally. Though the numbers attending the Jewish celebration were still low — only 500 visitors, compared to 5,000 in 2010 — Jews saw the slight uptick and the support from the post-revolution government as a signal of its desire to retain the status quo on Djerba. 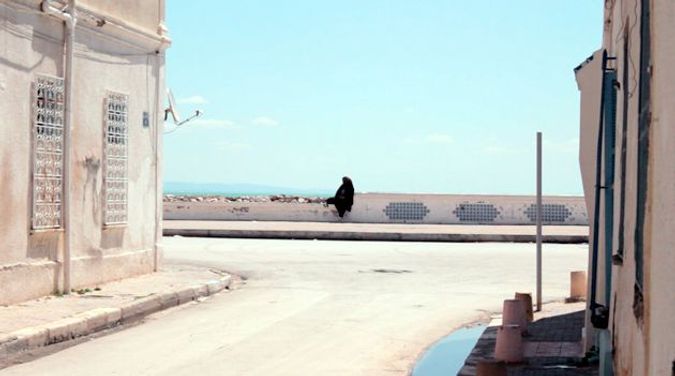 A woman sits on a wall in the seaside suburb of La Goulette, which once had a large Jewish community. Image by nate lavey

Bismuth and Lellouche are secular Jews who live far more cosmopolitan lives in Tunis than their co-religionists in Djerba. Both hail originally from the seaside town of La Goulette, which used to have a significant Jewish population. But they are very much men of their respective, quite different, times.

Bismuth, who was born in 1926, is a survivor of the Nazi occupation of Tunisia. He became a multinational businessman and is, perhaps, the most famous Jew in the country. As a major figure in the community, Bismuth was close to Ben Ali. In 2005 he was listed in U.S. diplomatic cables, later leaked via WikiLeaks, as a “notable” Ben Ali loyalist. His election in 2005 to the Tunisian Senate made him one of the few Jewish legislators in the Arab world, though the body itself was toothless. Perhaps unsurprisingly, Bismuth has fond memories of the old government — and contempt for Tunisian revolutionaries.

Speaking of Tunisia’s large numbers of unemployed college graduates, he said, “These are even more dangerous than the lower-class people, because the lower class can live with almost nothing, but these people, when they graduate, they expect they have a right to have a job.” 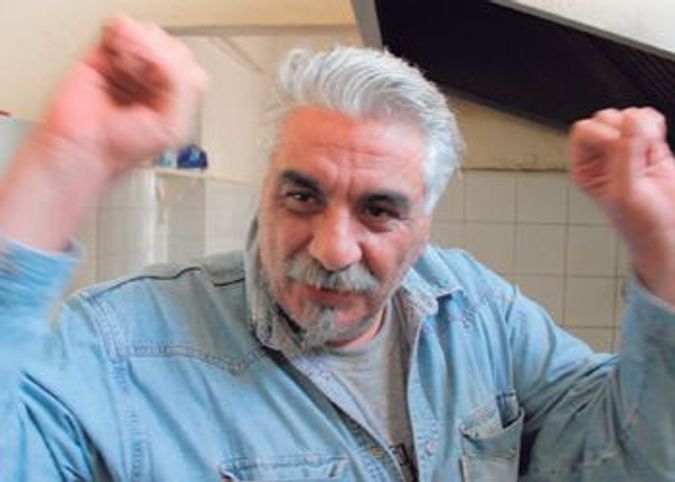 High unemployment has been a central complaint for Tunisians with and without degrees, but not for Jews, Bismuth said. “The Jews work! These unemployed people… they don’t want a job, they want a salary. Working for them is not a need, where for us [Jews], we cannot think of not working,” he said.

Lellouche, who is more than 30 years younger than Bismuth, believes that the revolution had broader goals and that it “was made in the name of dignity and democracy.” He believes it holds opportunities, too, for Tunisia’s Jews. Under the Ben Ali regime, “it was not really possible to create a Jewish association,” he explained. For years, Lellouche wanted to found a group that, unlike Bismuth’s, operated independently of the Ben Ali government to promote Jewish cultural heritage in Tunisia. And after the revolution, he did just that.

In the past year, Lellouche has been busy promoting Dar El Dhekra, which means “house of memory.” The new group aims to promote Jewish art, culture and social practices throughout the country.

Last October, Lellouche also ran for a seat in the Constituent Assembly as part of the tiny Union Populaire Républicaine, a small centrist party that placed him second on its candidates list. But the party only won enough votes to place its top candidate in the assembly.

In early June, however, members of the constituent assembly’s Committee on Legislative and Executive Power, which is helping to develop a new constitution, came out in favor of a proposal to specifically designate two seats in the assembly for members of Tunisia’s Jewish community.

“Tunisian Jews are Tunisian citizens like any others, and deserve a decent representation [in the Parliament],” Mehrezia Labidi, a Constituent Assembly member from the governing Ennahda Islamist Party and the vice-chair of the National Council on Tunisia’s Jewish Citizens, told the Arabic language Al Jarida news site, according to a June 6 JTA report.

Bismuth dismissed the proposal as “just one of many of their stupid ideas …. Those members won’t be able to do anything significant.”

Lellouche, on the other hand, speaks frequently in the press about the long history of good relations between Jews and their Muslim neighbors. But not everyone else in the country shares his commitment to pluralism. The new openness of a democratic society has allowed conservative Salafist groups advocating strict allegiance to Islamic law to demonstrate regularly throughout Tunisia. The largest of these demonstrations, in March, drew more than 1,000 people, who shouted “Death to the Jews” on the main avenue of Tunis.

The protest drew quick condemnation from all major political parties, including Ennahda.

Despite these occasional demonstrations and the election of an Islamist government, Jews in Tunisia seem fairly insulated from the aftershocks of the revolution or any religious violence — much as they were under the dictatorship. The difference, now, says Lellouche, is that Jews are free “to defend [their] interests in the Tunisian political system.”