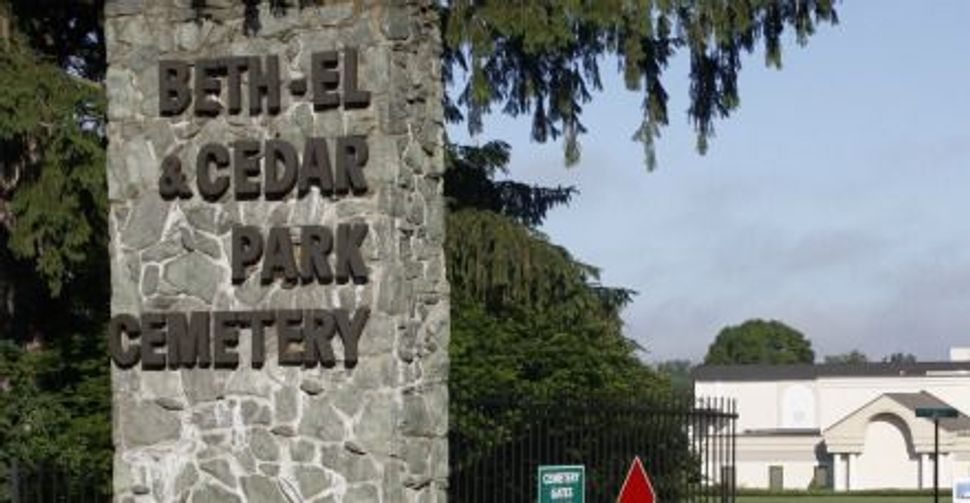 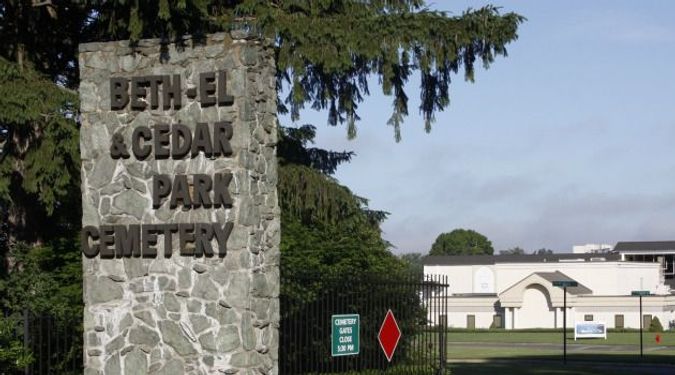 Eternal Rest: The president of this New Jersey cemetery was forced to give up leadership roles at three New York cemeteries amid allegations of excessive compensation. Image by shulamit seidler-feller

Ask those in the know who the highest paid executives at Jewish not-for-profits are, and you are likely to hear about salaries at groups such as the Anti-Defamation League, the Simon Wiesenthal Center or any number of big-city Jewish federations. But as it turns out, a Jewish executive at a not-for-profit cemetery in northern New Jersey is paid more than nearly any other Jewish communal official in the country.

Cedar Park & Beth El Cemetery’s president, Herbert B. Klapper, took home a base salary of $729,000 in 2009, according to tax documents. That’s more than any Jewish federation executive in the United States, not to mention the heads of all but one major Jewish defense agency.

Only one other not-for-profit cemetery in the country with comparable revenues paid its top executive a higher salary in 2009, according to a national not-for-profit compensation database. That cemetery, which is not Jewish, had assets three and a half times larger than those of Cedar Park.

In 2000, Klapper and two other individuals now affiliated with Cedar Park were forced to give up their leadership roles at three New York cemetery corporations upon signing an assurance of discontinuance with the New York State attorney general, who accused them of receiving unfair compensation.

Despite the allegations leveled at Klapper and two of his current colleagues by the New York attorney general, the organization has had no trouble with New Jersey regulators. Experts and watchdogs claim that regulation is lax in the state, in part because half of the people who sit on the state board that regulates cemeteries are themselves cemetery industry officials.

“In New Jersey you have [cemetery officials] who are regulating themselves,” said Rabbi Joseph Potasnik, executive vice president of the New York Board of Rabbis. “It’s our community that is paying the price for the lack of regulation.”

Cedar Park is a sprawling, 300-acre cemetery in Paramus, N.J. From the back of the lush lot, the front gate feels miles away. The property’s office shares a building with a massive mausoleum called the Sanctuary of Abraham and Sarah, where crypts are stacked level upon level to the towering ceiling.

On a recent late spring afternoon, scores of gardeners and gravediggers were swarming the well-kept grounds. At an interfaith mausoleum on the property, an honor guard waited outside as a casket was placed in a crypt. The cemetery buries two to 25 people per day. Roughly 100,000 bodies have been interred on the property during its more than 75 years in operation.

Klapper, who was said to be out of the office when the Forward visited the cemetery, is the president of three related not-for-profit entities that control the cemetery. He receives a salary from each of the entities. According to publicly available Internal Revenue Service records, his $729,165 total salary from these three entities in 2009 was matched or exceeded during the previous two years.

In 2010, the most recent year for which records are available, Klapper’s base salary was $2.1 million. According to Cedar Park’s Rose, a portion of that amount reflects the value of a deferred compensation package funded by an insurance policy that matured in 2010, which will be paid out over time.

The combined revenue of the three related organizations in 2009 was $15.8 million. A database compiled by the Economic Research Institute, which compiles data on executive compensation, shows only one person receiving a comparable salary among executives running not-for-profit cemeteries with revenues of up to $20 million.

Forest Lawn Memorial Park, a non-Jewish cemetery in Glendale, Calif., had revenue of $6 million in 2009 and paid its CEO & president a base salary of $772,000 plus a sizable bonus. But Forest Lawn claimed assets that year of $490 million, while Cedar Park claimed combined assets of $139 million. In 2010, Forest Lawn’s revenue skyrocketed to $68 million, suggesting that the cemetery operates on a different financial scale.

In the Forward’s 2011 survey of Jewish communal salaries — a survey that did not include Jewish cemeteries — only two individuals earned more than Klapper: Rabbi Marvin Hier of the Simon Wiesenthal Center received $739,000 in 2009, while Richard Joel, president of Yeshiva University, received $853,000.

Yeshiva University has more than 6,000 employees. Cedar Park has fewer than 200.

“[O]ur cemeteries are state of the art facilities,” Rose wrote. “We have 300 acres of property and over 25,000 crypt spaces in modern beautiful buildings. There are no other facilities like ours on the east coast. If you had visited other cemeteries, especially those in New York, you would have concluded that none offer the quality and dignity at burial, or offer mourners and visitors the opportunity to reflect in an environment like ours.”

Rose suggested that there are some individuals who hold positions at a number of otherwise unrelated cemeteries in New York whose cumulative compensations are higher than Klapper’s. Rose did not respond to an inquiry as to the names of those individuals. The Forward identified one person who is an officer at four unrelated New York cemeteries from which he earned $571,000 in 2010.

According to experts, the cemetery isn’t in violation of any rules or regulations in its compensation of Klapper. The section of the IRS code that regulates compensation by not-for-profit organizations doesn’t apply to cemeteries. New Jersey cemetery regulators have no direct say over executive compensation.

But Jewish community leaders still have concerns about the cemetery’s compensation practices. Jewish law and tradition require that bodies be buried as soon as possible after death, meaning that after a death has occurred, Jews can’t take time picking a cemetery, or choosing the day of the week when a burial takes place.

All three of the Schleins were previously involved in operating a number of New York cemeteries. Those relationships ended in 2000, when Klapper, Richard Schlein, Jeffrey Schlein, another current board member of one of the Cedar Park organizations named Herbert Stolitzky, and a fifth man who is now deceased, agreed to give up their stake in the three cemeteries in a pact with the New York State attorney general and the New York Department of State’s Division of Cemeteries.

In the document, signed by the five men, the attorney general alleged that in their various leadership roles at Mount Hebron Cemetery, Cedar Grove Cemetery, Mount Lebanon, and Mount Carmel Cemetery — all in Queens — their total annual compensation between 1993 and 1998 had been “excessive and unreasonable.”

The document also stated that the men owned a company that leased equipment to the cemeteries on terms that the attorney general’s office described as “unfair to the Cemeteries.” The document alleged that the cemeteries allegedly failed to divulge the relationship between the men and the leasing company in audited financial reports submitted to New York State.

In return for the attorney general agreeing not to pursue legal action against the five men, they agreed to resign from their positions at the cemeteries and never to take positions there again.

The five men did not admit wrongdoing, but entered the agreement “in order to resolve any possible violations of the provisions of the Not-for Profit Corporation law and the Estates, Powers and Trusts Law without the necessity of legal action by the Attorney General and the Cemetery Board,” according to the document.

In an emailed statement, Cedar Park spokesman Rose wrote: “The matter with the New York Attorney General was resolved 12 years ago and is long settled.”

A spokesman for the New Jersey Division of Consumer Affairs, which oversees the state’s Cemetery Board, did not respond to a request for comment on whether the Cemetery Board was aware of the settlement, and if the board had considered whether it should have an impact on the men’s ability to operate in New Jersey.

The New York agreement came after an investigation by the New York State Cemetery Board. The regulations that govern the New York board stand in stark contrast to the New Jersey board. In New York, the three-member board consists of the secretary of state, the attorney general, and the commissioner of health, or their designees. In New Jersey, the designees of the equivalent positions also have seats — but so do five people who work in the cemetery industry and two members of the public.

In May of 2004, a consumer complained to the New Jersey board about Cedar Park’s fees, according to minutes of one meeting. Klapper was asked to attend the board’s next meeting, in June, to explain his fees.

“Upon review of Mr. Klapper’s response, everything appears to be in order,” the June minutes read. No action was taken.

Following recent conversations with rabbinic leaders and cemetery owners, Loretta Weinberg, the Democratic Majority Leader in the New Jersey State Senate, has written legislation to be intro- duced this year that will reform the state cemetery board. According to Weinberg, the legislation was written largely in response to complaints over the high price of Sunday burials at Jewish cemeteries. Weinberg, whose husband is buried at Cedar Park, has proposed to create three more seats on the board for public representatives, meaning that members of the cemetery industry would be in the minority.

“I think that they’ve been single-minded, because they represent a single industry.” Weinberg said of the current board. “I think we need to do some reformation, and I think there are issues that particularly affect Jewish people and our method of dealing with how we bury our loved ones.”