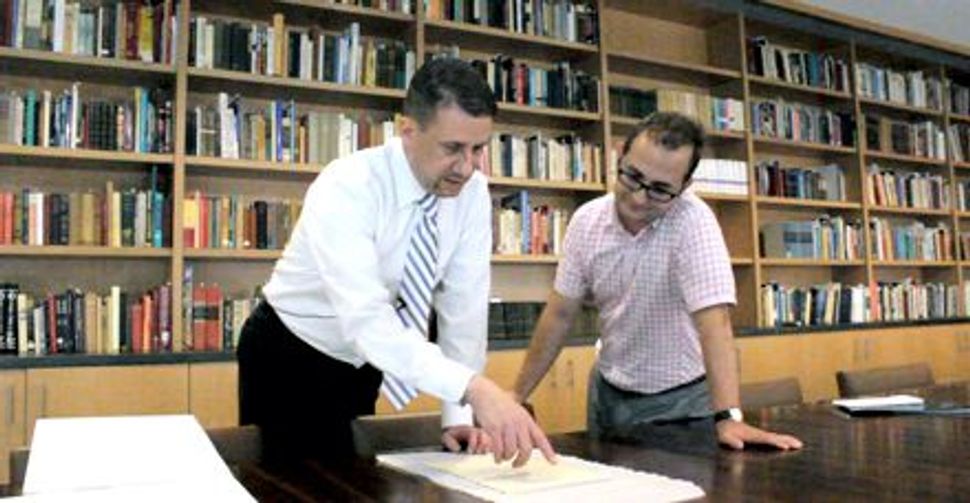 Imagine a country where Jews are prevented from serving as lawyers, where men must swear on the New Testament to enter public office and where people are denied the vote because of their faith. Welcome to America during the late 1700s, when a republic was forged in the heat of revolutionary ideas such as liberty and freedom, but where such freedoms could often be strictly limited.

?Our politicians? try to simplify freedom, but it?s an incredibly complex component of our national identity,? Josh Perelman said while standing in front of an enormous window on the fourth floor of the National Museum of American Jewish History, looking out over Philadelphia?s Independence Mall. Behind him was a bird?s eye view of Independence Hall, the Liberty Bell and America?s first presidential mansion, where George Washington was housed during most of his two terms in office, along with almost a dozen slaves.

Perelman, NMAJH?s chief curator, is gearing up for the June 29 opening of the museum?s first special exhibition, ?To Bigotry No Sanction: George Washington & Religious Freedom.? The show focuses on a dynamic period in American history, from the Declaration of Independence in 1776 to the ratification of the Bill of Rights in 1791, when religious and political leaders and civic intellectuals fought over the concept of religious liberty in public letters and debate.

Washington?s iconic 1790 letter to the Jews of Newport, Rhode Island, probably his most profound statement on religious liberty, is the star of this show. In a series of articles last year, I highlighted how the letter has been hidden from public view for almost a decade in an art storage facility in suburban Maryland. The letter?s reappearance would be cause enough to celebrate. But in Philadelphia, I was struck that such a powerful document was rendered even more special when set in the context of other writings of the day on religious liberty and freedom.

During the year and a half following Washington?s unanimous election in 1789, the president corresponded with other religious communities, including Lutherans, Methodists, Quakers and Catholics. Perelman has acquired many of these letters on loan for the special exhibition. Although America?s various religious communities did not coordinate their letter-writing efforts, Perelman says that, taken as a whole, they constitute a campaign to extract from Washington a commitment to a broad understanding of religious freedom. ?The framers of the Constitution? advocated for a really? revolutionary group of freedoms,? Perelman said. ?But this issue of religion ? what would religious freedom be? ? was not settled throughout 1789 and 1790.?

Washington?s feelings appeared to be clear. As he wrote to the Roman Catholics in March 1790, ?As mankind become more liberal they will be more apt to allow, that all those who conduct themselves worthy members of the Community are equally entitled to the protection of civil Government.?

Although America?s 2,500 Jews were fortunate to enjoy the freedoms of the new republic, particularly compared with the persecution that many suffered under European monarchs, discrimination at state level was still widespread. Even in Newport, where several Jews established themselves as leading merchants during the 1700s, Jews were denied the vote and barred from holding state office.

Newport was not alone. The exhibition opens with a 1787 letter to the Constitutional Convention from Philadelphia merchant Jonas Phillips, who complained that although Jews ?bravely fought and bled for liberty,? Pennsylvania legislators could assume office only upon swearing that ?the New Testament was given by divine inspiration.?

Though its title suggests that this is an exhibition about religious liberty, at its heart it is a show about the power of words. Washington?s letter is joined by other iconic documents, such as the Salem Broadside printing of the Declaration of Independence, Thomas Jefferson?s ?An Act for Establishing Religious Freedom? and a first public printing, in The Pennsylvania Packet newspaper, of the U.S. Constitution.

It is also a lesson in the fragility of words. When I visited the museum on June 25, none of the documents were in their cases because most are so fragile that they have very specific preservation requirements. Washington?s letter to the Jews of Newport, which was loaned to the museum under a three year agreement with its owners, the Morris Morgenstern Foundation, can be displayed for only three months each year. It cannot be hung vertically and must instead ?rest? on a slight incline. After the exhibition closes, on September 30, the original will go into storage until next summer. (A facsimile will be displayed as part of the museum?s permanent collection.)

The NMAJH lobbied for Washington?s letter to the Jews of Newport since long before it opened its $150 million building in 2010. Although the museum failed to secure the document, it still chose to make Washington?s Newport visit a central part of its narrative of the American Jewish story. The permanent collection opens with an excerpt from a letter written by Moses Seixas, warden of the Newport congregation, which served as the inspiration for Washington?s famous line that America?s government gives ?to bigotry no sanction, to persecution no assistance.?

Perelman had spent months poring over letters from all the religious minorities, and he said that none had the profundity of Washington?s letter to Newport. ?None so clearly and articulately states Washington?s, and therefore the nation?s, understanding of what religious freedom would be in America,? Perelman said.

He pointed out that one year after Washington laid out his vision of religious freedom, Catherine the Great established the Pale of Settlement, a vast swathe on the Western fringe of the Russian Empire where Jews were forced to live. ?There?s no other nation promising such broad and real freedoms at the time that Washington wrote his letter to Newport,? Perelman said.

Lest visitors are tempted to slip into self-satisfied complacency, Perelman ends the exhibition with a letter from Thomas Jefferson to Mordecai Manuel Noah, written in 1818, almost 20 years after Washington?s death.

?Your sect, by its sufferings, has furnished a remarkable proof of the universal spirit of religious intolerance inherent in every sect,? Jefferson wrote, ?disclaimed by all while feeble, and practiced by all when in power.? Though Americans safeguarded religious freedom in law, fanaticism and prejudice live on in practice, Jefferson wrote, and ?more remains to be done.?