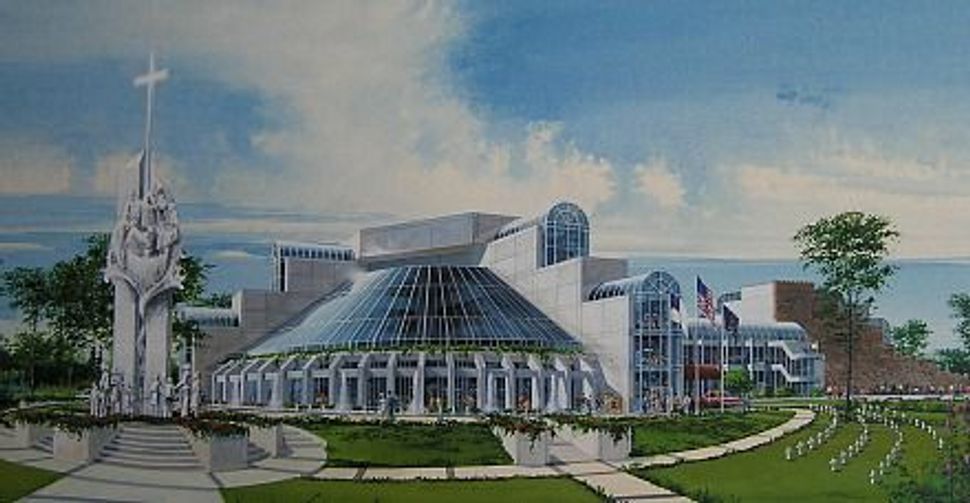 Image by courtesy of mark holick 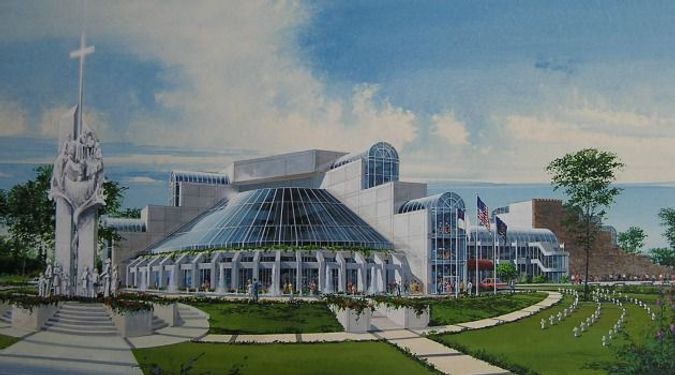 Whose Wall? A full-sized replica of the Western Wall, right, is planned as part of an anti-abortion center in Wichita, Kansas. Image by courtesy of mark holick

Plans for a full-size replica of the Western Wall in Jerusalem are being drawn up in Wichita, Kan. But women who have had abortions — rather than Jews — are the target audience.

The proposed replica is part of a monumental “International Pro-Life Memorial and National Life Center” being planned by evangelical activists in Wichita’s anti-abortion community. The envisioned shrine is meant to promote and solidify Wichita’s reputation as the city in America that is most hostile to abortion, say the activists. The project planners have decided that the most vivid way to invoke the scale of the abortion tragedy, as they see it, is to reference Jewish suffering — embodied in their minds by the Western Wall in Jerusalem.

Read the Forward’s editorial denouncing the effort to appropriate a symbol of Judaism for an anti-abortion crusade.

The “Wailing Wall,” as the activists refer to it, and the accompanying center, will be fronted by 60 crosses, each one representing 1 million aborted fetuses.

“[The Western Wall] is a place that memorializes what happened during the Holocaust,” said Pastor Mark Holick, the spokesman for the anti-abortion project. “Since Roe v. Wade,” he said, referring to the 1973 Supreme Court ruling that struck down state bans on abortion, “60 million baby boys and girls have been murdered, and that is a holocaust unprecedented in the history of mankind.”

For the past 20 years, Wichita has served as ground zero for the national abortion wars, which reached a crescendo in 2009 when late-term abortion provider Dr. George Tiller was gunned down in his Lutheran church.

Members of Wichita’s tiny Jewish community reached by the Forward by phone seemed largely unaware of the project. But the idea of using the Western Wall — the sole remaining section of the retaining wall that surrounded the Jewish Second Temple — to symbolize the Holocaust struck some as odd. “I have never seen it as a place that you go to remember the Holocaust,” said Dale Marcus, a retired psychologist and a member of Ahavath-Achim Hebrew Congregation, a nondenominational traditional synagogue in Wichita. “It has nothing to do with abortion.”

Others took issue with what they saw as an appropriation of Jewish history. “People are talking about it in a very dismissive, funny way,” said Rabbi Michael Davis of Congregation Emanu-El, a Reform synagogue. Davis, one of the few Jews aware of the project, said, “I see it as another example of a non-Jewish group taking a Jewish symbol and reinterpreting it for their own private use and thereby bastardizing it.”

The use of the Western Wall by anti-abortion activists appears to be something new. But national anti-abortion groups have long likened abortions in America to a holocaust, or compared it to the Holocaust, to make their point. In 2007 Republican presidential hopeful Mike Huckabee talked about the “holocaust of liberalized abortion” in a speech to the Family Research Council’s Value Voters Summit in Washington, D.C. In his anti-abortion video “180,” released in 2011, Australian filmmaker Ray Comfort told one young woman who questioned his views, “Hitler declared Jews as non-humans and that’s what you’re saying when you say that’s not a baby until three months.” Earlier this year, an email newsletter from Democratic New York State Senator Ruben Diaz informed his constituents that “Hitler was pro-choice.”

“We have always said it is unacceptable, it is insensitive, it belittles, and distorts,” said Abraham Foxman, national director of the Anti-Defamation League. “Holocaust trivialization is rampant.”

In Wichita, the abortion debate has largely broken down on religious lines, with most of the city’s evangelical churches acting as activist centers for the rights of the unborn. But the town’s two synagogues have stayed quiet on the topic, though individual Jews in Wichita have been active in the abortion rights movement.

Davis, the Reform rabbi, said that the Jewish community was loath to draw attention to itself on an issue known to drive some Wichita activists to harass opponents or — in the case of Tiller’s murderer, Scott Roeder — kill them. Several years ago, Davis conducted pastoral work at Tiller’s clinic for Jewish families seeking late-term abortions. But though Davis was open about his views on abortion, he never asked his congregation to follow suit.

“I think that some people are concerned about the Jewish community publicly taking a controversial political stand, especially in a place like Wichita, Kansas, where if you do such a thing you get targeted,” he said.

Cynthia Stein, the president at Ahavath-Achim, echoed this view.

“Someone walked into a church on a Sunday morning and shot George Tiller,” she said. “So am I afraid? A little bit. When you are a community of under 1,000 people in a very conservative community of 350,000 people, are you a little concerned sometimes? Yes.”

Holick, the spokesman for the pro-life memorial, is a familiar figure to many Wichita Jews. In 2008, he made national headlines by writing on the marquee outside his former church, Spirit One Christian Center: “AMERICA WE HAVE A MUSLIM PRESIDENT THIS IS SIN AGAINST THE LORD!” In 2010, he was arrested for loitering outside of the Islamic Society of Wichita where he was handing out pamphlets and DVDs with testimonies of Muslims who converted to Christianity. After Tiller was shot, the marquee on Spirit One Christian Center read: “GEORGE TILLER— HE DIED THE SAME WAY HE LIVED.”

“This is par for the course for him,” Davis said of Holick’s planned pro-life memorial.

In 2010, Holick’s Spirit One Christian Center folded into another local evangelical church, Word of Life Ministries, which is providing a 29-acre plot of land in Northwest Wichita for the memorial. Holick said he will use his former church’s non-profit organization to raise funds for the project, which he estimates will cost between $20 and $40 million.

Holik has yet to launch his fundraising campaign but said that he and several other pastors will be reaching out to “primarily Christians and pro-lifers” for donations, which he is currently accepting through the project’s Web site.

One major Wichita-based anti-abortion group, Operation Rescue, cast doubt on the viability of the project. “We have a memorial here for the preborn at our office but it is not good enough for him” said Cheryl Sullenger, senior policy advisor at Operation Rescue. “Frankly, no one has ever come here and wanted to reflect on the baby they aborted.”

When it is completed, the pro-life memorial will have three major components: The Western Wall; a courtyard with the 60 crosses, and a statue featuring a family that had an abortion, the figures in the Holy Trinity, and a cross. The facility will likely include a crisis pregnancy center, where women who are considering abortion can receive counseling. The wall will mainly serve as a site for women to mourn their aborted fetuses.

Holick is under no illusion that copying the Western Wall — which is about 187 feet wide by 105 feet tall in the area reserved for the public in Jerusalem — will be an easy task. He said that the project’s founders may travel to Israel for research and planning purposes. Such a trip would mark his own first time in the Holy Land. “We will take the specs from the Western Wall that exists and try to duplicate it to the best of our ability,” said Holick.

Davis said that it was premature for the Jewish community to respond to the memorial, particularly since it had yet to break ground. “I don’t want to give it too much publicity by protesting it before they have even raised money,” he said. “If it does get to that point, I will make sure that everyone is aware of it and that we make a stand not to participate in any way.”

But Holick said that he means no harm to Wichita’s Jews. “We understand that some Jews consider it controversial,” he said of the wall. “It is our hope that it will be of help to the Jewish people, like it is in Israel.”