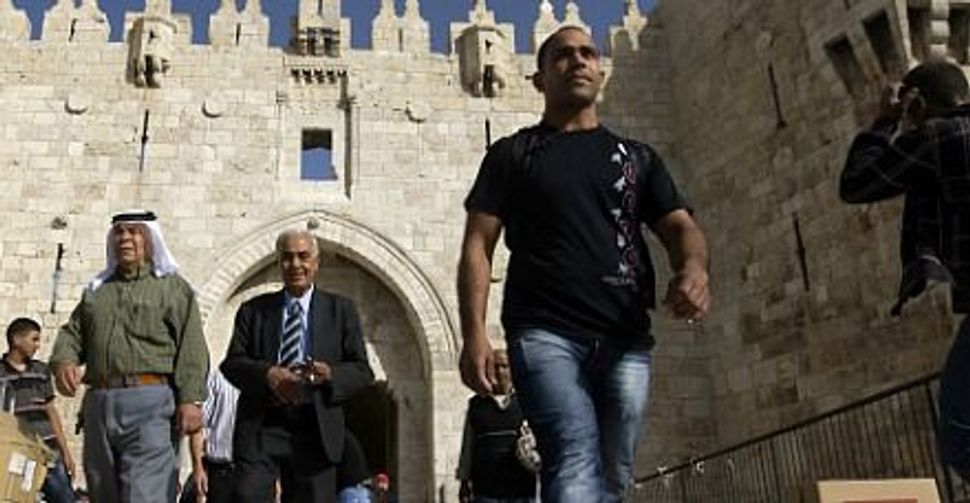 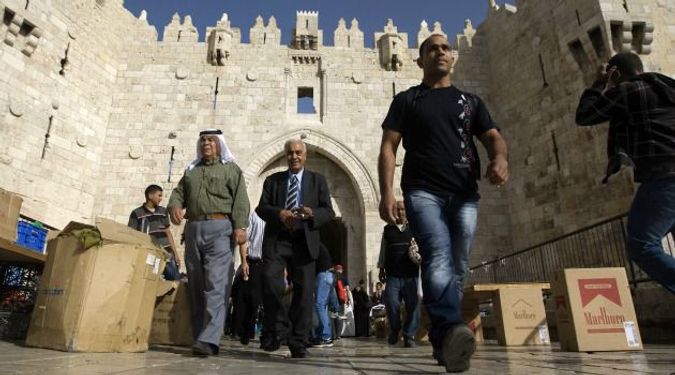 Walking Through Gates: Palestinian athletes may not win medals in London, but they hope to highlight their national identity. Image by getty images

A portrait of the two most prominent Palestinian leaders – current Palestinian Authority President Mahmoud Abbas and former President Yasser Arafat, who died in 2004 – hangs in the conference room of the Palestinian Olympic Committee headquarters.

The background of the portrait is a panorama of the Dome of the Rock in the Old City of Jerusalem, which Israel and the Palestinians both claim as a capital. National flags and photos of national leaders would be commonplace at any country’s Olympic office. Indeed, Israeli flags abounded at a press event for the Israeli Olympic team earlier this month.

Halabi says he is proud, for example, that Palestinian judoka Maher Abu Rmeileh became the first Palestinian ever to qualify on his own for an Olympic event. But he is even happier that Abu Rmeileh is from Jerusalem.

Four Palestinian athletes, two men and two women, will join Abu Rmeileh, who is 28, in London: swimmers Sabine Hazboun and Ahmed Mostafa Gebrel and sprinters Baha Alfarra and Woroud Sawalha. The latter covers her hair even while competing.

While Abu Rmeileh qualified for the Olympics on his own by competing in his sport, the other Palestinian athletes, by contrast, will reach the Games via a special invitation from the International Olympic Committee reserved for countries whose athletes have not been able to qualify for events. Palestinians have been competing in those spots since 1996, the first year they participated in the Olympics.

Sawalha, 22, does not have medal hopes, saying that she needs “more years” to train, but said that she is excited to go to London, “represent my country and see another world.”

Israeli delegation head Efraim Zinger said that the Israeli Olympic Committee has tried to use the Olympics to foster cooperation between his team and the Palestinian one. Israel offered joint training facilities and staff to the teams, he said, and the International Olympic Committee “praised our effort and cooperation. But on their side we didn’t get any response.

“It’s a shame, because we believe that through sports the young generation can get to know each other better than during day-to-day life,” he said.

Halabi dismissed the notion that sports could bring Israelis and Palestinians together. For him, conversely, preparing for the Games has brought the Israeli-Palestinian conflict into sharp relief.

“We are in the occupation,” he told JTA. There are “no facilities, no coach, no moving for the player from town to town – from Jerusalem to Ramallah, from Ramallah to Bethlehem.” Halabi said that due to restrictions on Palestinian freedom of movement, the first time the entire delegation will meet is when the athletes and coaches arrive at London’s Heathrow Airport on Friday.

Even when offered, Halabi said he refuses any cooperation with the Israeli delegation. “There are more than 6,000 Palestinians in their prisons,” he said about Israel. “With the occupation and the prisons, I cannot train in judo” with Israel.

For her part, Sawalha would be happy to train with Israelis. “The whole thing is about sport and nothing else,” she said.

Zinger said that the Israeli Olympic Committee has been responsive to every Palestinian complaint regarding freedom of movement, doing its utmost to ensure that Palestinian athletes can train without limitations.

“They have no problem in principle as far as we know,” he said. “When there were problems like that in the past we managed to work it out and since then we haven’t heard any complaints.”

The International Olympic Committee reported in an October 2011 news release that the Israeli and Palestinian Olympic committees met three times last year regarding potential collaboration and easing freedom of movement, but has reported no further progress since then.

Even as he eschews using the Israeli Olympic team’s gyms, Halabi lamented his athletes’ subpar training facilities. As such, while star Israeli judoka Arik Ze’evi expects to win a medal, Halabi has modest goals in mind for Abu Rmeileh.

“I hope to see him carry the Palestinian flag in London,” Halabi said. “He is a good fighter in judo. Maybe he will make a good place, but a medal is very difficult.”

Spats between the two committees have occurred ever since the Palestinian delegation first announced its participation in the 1996 Atlanta Olympics. Israel reportedly objected that year to the Palestinian athletes’ walking under a banner that read “Palestine,” on the grounds that there was no recognized state of Palestine. The International Olympic Committee dismissed the complaint.

This year, Israel has lobbied heavily – and so far unsuccessfully – for a minute of silence at the Games to commemorate the murder of 11 members of the Israeli delegation to the 1972 Munich Games. Palestinian terrorists killed the victims. Halabi said he had “no comment” on the issue.