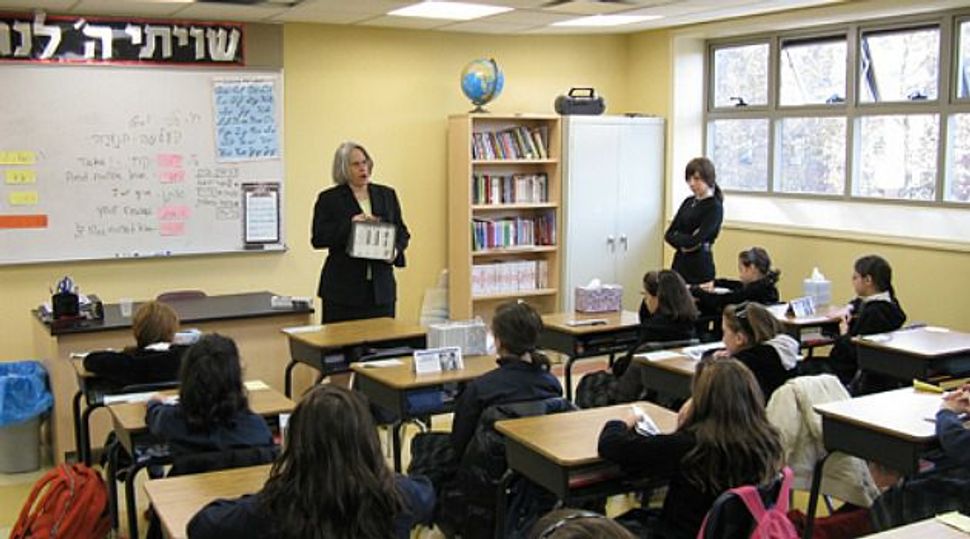 Reading Tea Leaves: Assemblywoman Helene Weinstein reads to students at a Brooklyn yeshiva. In a nod to growing Orthodox political power, the lawmaker introduced a bill that will expand state funding of special education students at Jewish schools. Image by courtesy of helene weinstein

The bill, passed by both houses of New York State’s legislature in June, will enable at least some — and perhaps many — Orthodox children with special education needs to be taught in Jewish parochial schools at state expense rather than in the public school system’s own special education programs.

If signed, opponents say, the new law will create a religiously segregated special education system. The bill’s defenders say that it will allow for placement of some children in social environments better suited to their needs.

The bill’s passage marks a political milestone for New York’s ultra-Orthodox community, which lobbied hard for the legislation. This comes as Democrats face increased competition from Republicans for Orthodox votes, particularly in Brooklyn. Two Brooklyn Democrats have already lost elections that looked like easy victories. Now, incumbent Democrat lawmakers from these same areas appear to be listening to Orthodox constituents with increased attentiveness.

“You pay attention to people who have the potential to put you out of office,” said Hank Sheinkopf, a right-leaning New York Democratic political consultant. “I think Democrats have reason to pay attention and to be very mindful of servicing a constituency that, frankly, is marginal, long term, for Democrats.”

A recent study from the UJA-Federation of New York found that Jews make up 23% of the population in Brooklyn. Those Jews, the study suggested, aren’t necessarily liberals. More than half the Jews the study counted in New York City are members of the conservative-leaning Orthodox or Russian-speaking Jewish communities.

Weinstein’s district overlaps in part with the congressional district represented by Republican Representative Bob Turner, whose surprise victory in a special election last fall was attributed largely to dissatisfied Jewish voters. Her district also overlaps with the heavily Jewish State Senate district where Republican David Storobin, a Russian-speaking Jew, narrowly won a special election in May that he was expected to lose.

Weinstein, who was first elected to the Assembly in 1980, said in an interview with the Forward that she introduced the special education bill following a spring meeting with representatives of Agudath Israel of America, an umbrella group that lobbies for ultra-Orthodox interests.

The bill would make a handful of changes to the way in which school boards reimburse private school tuitions to families that believe public schools cannot meet their children’s special education needs.

Orthodox families generally send their children to private yeshivas rather than public schools. But children with learning and other disabilities are particularly expensive to educate privately. New York State public schools are required to provide such children with tailored educational programs, but parents can make claims for reimbursement after placing their children in special education private schools.

The new bill will allow parents to request that school boards also take into account the educational impact of “differences between the school environment and the child’s home environment and family background” when deciding whether a special education child is eligible for private school tuition reimbursement.

The law does not define what it means by “home environment and family background.” Agudath Israel’s Leah Steinberg, who works on special education affairs for the group and attended the spring meeting with Weinstein, said that the phrase was not meant to refer specifically to Orthodox children.

“If you’re talking about a child who’s in the middle of the [autism] spectrum, there are going to be things that they are going to be able to learn… but if you’re not going to put them in a place where they’re comfortable… it will impact on their ability to incorporate what’s going on in the classroom,” Steinberg said.

Critics of the bill said its language will lead to Orthodox Jewish children receiving placements in private Jewish schools.

The motive of the legislation appears to be “tipping the scale” against a special education placement that “is not religiously segregated,” said Jay Worona, general counsel of the New York State School Boards Association. Worona has emerged as one of the bill’s chief opponents.

The bill would also require school boards to reimburse parents for special education tuition payments to private schools within 30 days after a school board approves such funding. Currently, the reimbursements — often worth tens of thousands of dollars — can take an entire year to be paid.

Another provision in the bill would effectively end the practice of requiring parents of children placed in private special education settings at state expense to have their placements reviewed on an annual basis. The costly process can require parents to take off days from work and hire attorneys.

Steinberg rejected critics who warn that the broader eligibility requirements will prove costly for local school districts, many of which are already facing high special education costs. Steinberg said that she had discussed the legislation with experts who believe that only a small number of additional children will qualify for private school reimbursements under the new guidelines. “They don’t think there will be any change in the amounts of children,” Steinberg said.

Some critics assert that recent events in the upstate New York school district of East Ramapo suggest otherwise. Situated in Rockland County, the East Ramapo district has a large ultra-Orthodox population and a school board controlled by ultra-Orthodox members. That district has faced sanctions from the state education department over its practice of approving reimbursement of special education tuition for private schools without adequate justification. In the 2011–2012 school year, the East Ramapo district placed 73 disabled students in private schools. The New York State Education Department determined that 19 of those placements were not justified.

The NYSED has not stated why those particular placements were not justified. But Steve White, a longtime activist opposing the school board, argues that the new law could lead to far more requests for private special education placements from the Orthodox community in East Ramapo.

“The special education bill that’s out now would change what’s considered appropriate,” White said. “It could possibly open up for the school district to have to pay for a thousand special education students’ tuition[s] in private schools.”

Orthodox advocates argue that their community is entitled to its share of special education funding. “I think the Orthodox Jewish community receives a pittance of what it gives to the state,” said Ezra Friedlander, CEO of the Friedlander Group, a lobbying firm that represents not-for-profits from the Orthodox community. “If you calculate the amount of money that the city and the state of New York save each and every year by the community sending its children to a private yeshiva… it would be in the billions of dollars.”

Cuomo’s office did not respond to a request for comment on whether or when the governor planned to sign the bill.