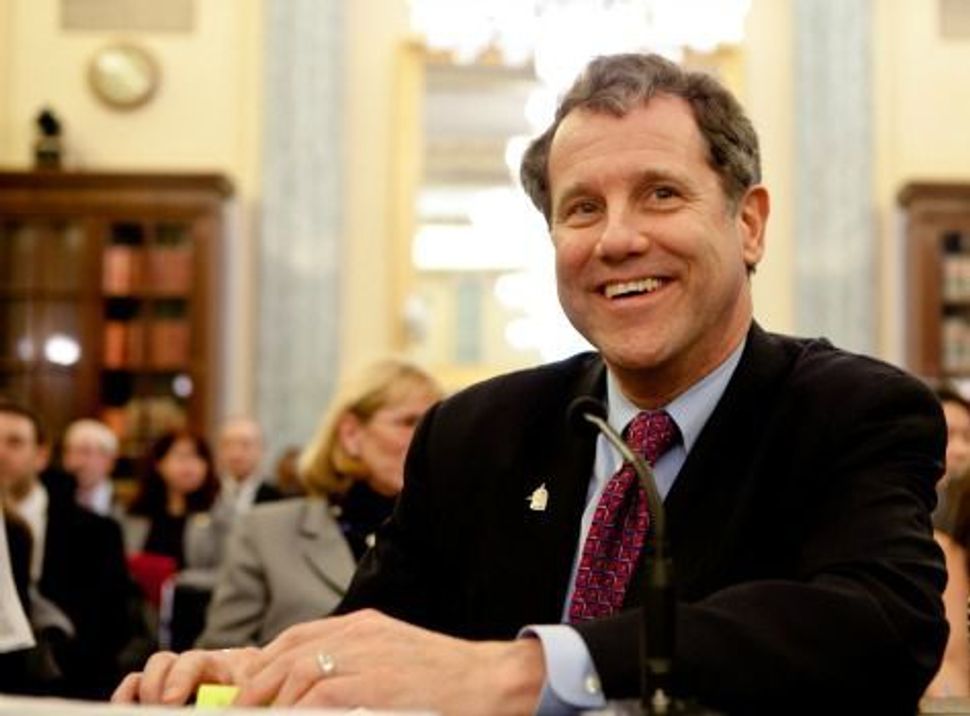 A flood of money brought in by prominent national political action committees has become the norm in this year’s U.S. Senate race in Ohio, which pits first-term incumbent Sherrod Brown, a Democrat, against Republican Josh Mandel, the state treasurer and a Jewish Iraq war veteran.

Because of the state’s swing role in recent presidential elections – going for George W. Bush in 2004 and Barack Obama in 2008 – the national parties are paying particular attention to Ohio’s 18 electoral votes. As a result, television advertisements for President Obama and the presumptive GOP challenger Mitt Romney are blitzing across the state’s airwaves along with ads from the Brown and Mandel camps.

The Ohio U.S. Senate races are consistently listed in the top three most expensive ones in the country, along with Massachusetts and Texas, according to the nonpartisan Center for Responsive Politics (CRP). As of the end of June, Brown’s campaign had amassed $15 million and had spent about $8.8 million, according to CRP. Mandel’s campaign had $9.9 million and had spent almost $5 million.

Polls have Brown in front by various margins. A June 25 Quinnipiac poll had Brown ahead of Mandel, 50-34, and a July 18 Rasmussen Report called the race at 46-42 in favor of the incumbent.

Support for Israel has not been a major issue in this campaign, but is being addressed by the candidates.

Mandel has not held federal office, but his backers call him a strong supporter of Israel, which on his campaign website, he calls “our most reliable ally in the Middle East.” He has been a supporter of the American Israel Public Affairs Committee since his college years at Ohio State University.

Mandel has called for the United States to relocate its embassy from Tel Aviv to Jerusalem and has stated there is no such thing as East and West Jerusalem, adding Jews should be allowed to build homes anywhere in that city.

In his role as state treasurer, Mandel authored and was involved in divesting state pension funds from companies doing business in Iran.

Brown, who served in the U.S. House of Representative from 1993 to 2007, is one of four Senate candidates whom J Street, the liberal pro-Israel lobby, has endorsed thus far in the 2012 election.

“Sherrod is committed to full funding of aid to Israel, and he supports preserving Israel’s military edge against any threats in the region,” Sadie Weiner, press secretary with Friends of Sherrod Brown, said. “He supports legislation furthering sanctions on Iran, and he also believes that no option is off the table” when it comes to dealing with Iran.

On the Republican side, PACs such as Karl Rove’s Crossroads GPS and the U.S. Chamber of Commerce have pumped in millions of dollars to blitz the Buckeye state with anti-Brown commercials. Crossroads GPS in particular has been running issue advocacy ads targeting Brown’s support of Obama’s health care plan and stimulus package.

Democratic super PACs such as Sen. Majority Leader Harry Reid’s Majority PAC, the League of Conservation Voters and Service Employees International Union have unleashed their own advertisements against Mandel.

Noah Silverman, the Republican Jewish Coalition’s congressional affairs director, called the Ohio race “definitely one of our top targets. This is one of the swing states where there is a vulnerable incumbent.”

Democrats concede the PAC money is influencing the race. “It’s fair to say the only reason Josh Mandel is doing as well as he is is because of the vast quantities of money pouring in,” David A. Harris, president and CEO at the National Jewish Democratic Council, said.

“This unfortunate picture is evidence” that Super PAC money “can actually change ballots and bring [Mandel] in striking distance of a good public servant,” he said.

In a July 25 fundraising letter, Mandel, the grandson of a Holocaust survivor, also criticized spending, but said it’s being used to defeat him. “Some of the most deep-pocketed liberal special interest groups in America have spent more money on ads against me than they have against any U.S. Senate candidate in the entire country,” he wrote.

But Weiner countered, “Josh Mandel’s secretly funded special interest friends have spent $11.5 million to boost his flailing campaign and lie about Sherrod’s record – more than has been spent against any other Senate candidate in the country.”

According to Mandel, 70 percent of the $2.3 million spent nationally on negative advertising by Majority PAC has been spent against him.

But Majority PAC communications director Zach Gorin noted, “It’s the height of hypocrisy for Josh Mandel to go up in arms over spending when Karl Rove and the Koch brothers have spent in the neighborhood of $10 million on his behalf. Mandel is swimming in special interest cash, raising money from payday lenders in the Bahamas instead of being in Ohio doing the job he was elected to do.”

Gorin was referring to a trip Mandel took in the spring to the Bahamas for a fundraiser. Mandel raised $67,000 there, according to the Cleveland Plain Dealer newspaper.

Brown’s campaign office released a list of outside money totaling close to $11.5 million being spent against their candidate. On that list are the U.S. Chamber of Commerce, which has spent $4.7 million, and Crossroads GPS, which has pumped in $2.5 million. Another $2.3 million came from 60 Plus Association, which calls for the privatization of Social Security and the end of Medicare, according to Brown’s campaign.