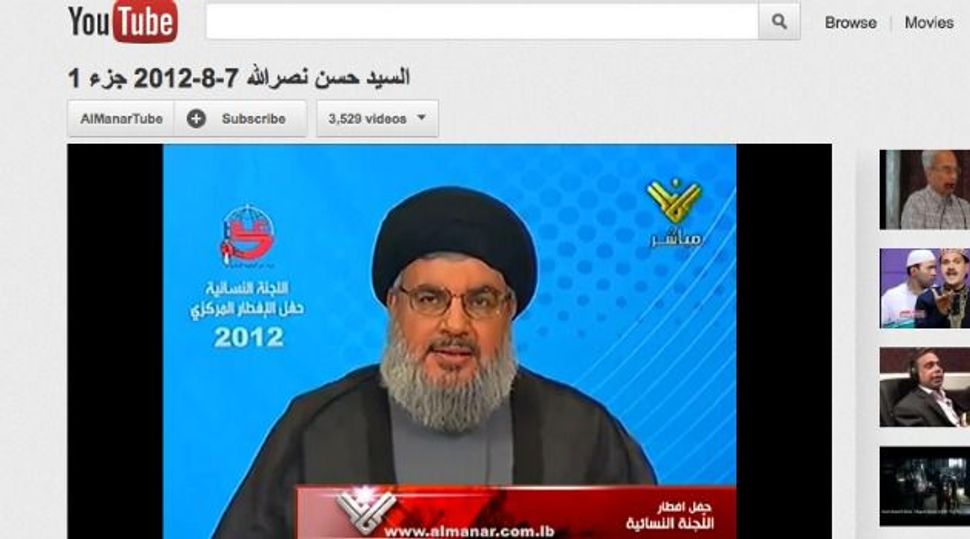 Share the Terror: Despite being branded a terrorist group, Hezbollah is active on social media platforms.

A campaign to drive designated terror organizations off social media platforms is proving effective on some fronts in preventing Hezbollah from reaching out to members and supporters through the Web.

Several key social media sites, including Facebook, agreed recently to delete accounts and applications belonging to the Lebanon-based group and its TV station, Al-Manar, which have both been designated by the United States as terror groups.

But Twitter, the leading micro-blogging website, has refused to respond to the call by some advocacy groups to block Hezbollah, in line with its general stance against suppressing speech on its platform. And YouTube, which is owned by Google, has rebuffed demands for a blanket ban on the group’s use of its platform to push out Al-Manar’s videos.

A report published July 27 by the Washington-based media watchdog organization Middle East Media Research Institute details the “extensive use of U.S. social media by Hezbollah.” Not only did the group have its official website hosted in the United States, but it also made its TV broadcasts available through Apple’s iTunes, on mobile device applications and through the two major social media websites, Facebook and Twitter. Al-Manar TV also has its own channel on YouTube, on which videos produced by the station are available to all.

“It’s a way to reach out to followers and potential recruits,” said Steven Stalinsky, MEMRI’s executive director, who compiled the report. In MEMRI’s view, Hezbollah shouldn’t have Twitter or Facebook accounts or any other access to websites in the United States. “It is against the law,” argued Stalinsky, who charges that Twitter is violating America’s anti-terrorism statutes.

But the legal situation, it turns out, is complex.

Hezbollah has been designated by the State Department as a Foreign Terrorist Organization, and it is therefore unlawful for American citizens or U.S. entities to provide “material support or resources” to the group. This prohibits any business transactions with Hezbollah. But it also involves other forms of support, including “communications equipment.”

Al-Manar was added by the State Department as a Foreign Terrorist Organization, and it is therefore unlawful for American citizens or entities to provide “material support or resources” to the group. This prohibits any business transactions with Hezbollah. But it also involves other forms of support, including “communications equipment.”

Al-Manar was added in 2006 to a Treasury Department blacklist of Specially Designated Global Terrorist Entity following the determination that it is owned and controlled by Hezbollah.

“When they have the ability to access means of communication, it makes it easier for them to recruit,” said Avi Jorisch, a senior fellow at the American Foreign Policy Council and a former Treasury Department adviser on terror.

Indeed, the U.S. government made clear its intention to go after those providing services to Hezbollah’s TV station in a 2006 case against two satellite TV operators who were paid by Al-Manar in return for relaying its broadcasts in the United States. The chief operator, Javed Iqbal from Staten Island, pleaded guilty and was sentenced to five and half years in prison. His partner, Saleh Elahwal from New Jersey, was convicted and sentenced to 17 months in prison.

Legally, however, the case of hosting Hezbollah and Al-Manar on social media websites is more complicated. Providing web hosting service for the group’s website or relaying its broadcasts to American viewers involves the providers in question in financial transactions with Hezbollah, which is explicitly forbidden by law. But starting a Facebook page or opening a Twitter account or a YouTube channel is completely free. The providers do not receive, directly or indirectly, any funds, goods or services from a designated terror group. Like many other websites, social media platforms also require users to check a box stating that they agree to the company’s terms of use, which includes the user’s agreement to abide by the laws of the United States.

Allowing Hezbollah and its affiliates to join these networks “may not necessarily break the letter of the law,” Jorisch said, “but it breaks the spirit of the law.”

That is enough for most companies. Days after MEMRI issued its report on Hezbollah’s use of American social media platforms, many of them took action. Facebook deleted the group’s pages, Apple removed applications from iTunes and Google did the same with Hezbollah’s Android application.

“So far, it has been very successful,” Stalinsky said, touting his report’s impact. But he noted that Twitter and YouTube have yet to join in banning Hezbollah and Al-Manar from their sites. “The report brought a lot of attention to this issue, and hopefully it will also get Twitter to take action,” he said.

Twitter, self-described as “the free speech wing of the free speech party,” has consistently declined to respond to such demands, or to block Hezbollah accounts.

Earlier this year, Twitter drew the ire of Jewish groups for rebuffing their calls to block content that the groups condemned as anti-Semitic and hate-filled. The website has also rejected calls by foreign governments, such as Pakistan, to take down tweets that allegedly offended Islam, or to adhere to any censorship rules. Twitter also fought back against attempts by lawmakers to have accounts by Afghanistan’s Taliban and Al-Shabaab, a Somali group connected to Al Qaeda, blocked.

Twitter’s press department did not return emails requesting comments for this article.

Activists have argued that removing Hezbollah’s content from Twitter wouldn’t infringe on free speech but would merely comply with U.S. laws that limit ties with terror organizations. As a private organization, Twitter can cut off Hezbollah and other groups without having to worry about violating the First Amendment, which deals only with government infringement on freedom of expression.

But forcing Twitter to do so “would be an uphill battle,” warned Ken Paulson, president and CEO of the First Amendment Center at Vanderbilt University. Twitter, he explained, is a hybrid entity that could be viewed either as a content media like other websites or publications, or as a so-called “common carrier” utility, similar to a telephone company. Trying to force Twitter to block Hezbollah through litigation or prosecution, he said, would be like going after cell phone providers for allowing Hezbollah to use their lines.

The road forward, some suggest, is not through the courts but through public pressure. “Twitter is clearly vulnerable to public outrage,” Paulson said. Stalinsky added, “At a certain point, as the pressure increases, they will have to adopt a clear policy and explain it.”