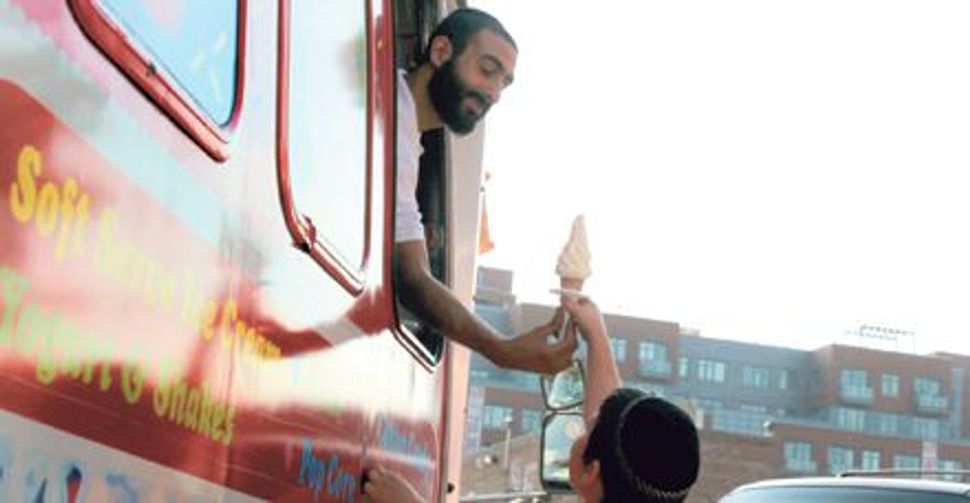 ‘Give me it for free,” a group of young boys yells in Yiddish, giggling merrily, as their tzitzit strings dangle.

The man standing in the ice cream truck grins down at them. “No, give me money,” he replies.

The negotiation continues until an older sibling finally comes over with a wrinkled fistful of dollar bills.

“They always come at me, in Yiddish, shouting for free ice cream,” Yaniv Bazel said while leaning against a popcorn machine in his hot-pink ice cream truck, in the Crown Heights section of Brooklyn. “They drive me crazy!”

It’s all in a day’s work for Bazel, 24, the Lubavitch co-owner of the Kosher L’Mehadrin Bazel Ice Cream Truck. Though there are hundreds of ice cream trucks that tour the city streets in the summer, this truck is different from most. It is among the few that hold a strict kosher certification allowing them to cater to a specific — and ice cream hungry — sliver of New York children: the ultra-Orthodox.

In 2006, Bazel had no ice cream experience and one lone truck — a small school bus painted bright pink, designed with clip art pictures of ice cream cones and with “Bazel” written across it in swirling letters. He recruited his brother and soon-to-be brother-in-law, both 17-year-old Israelis, to venture into the project with him. Since then, that original truck has become a family business. Bazel now has a fleet of six trucks, each one stocked with freezers and ice cream machines. Every summer, his father flies in from Israel to help man the trucks, and he’s hoping to get a visa for his youngest brother to join them in the United States.

“We want to be big, like a kosher Mister Softee, with 600 trucks all over the city,” Bazel said. “We’re not trying to sell to people that don’t keep kosher, because they already have enough ice cream trucks. We’re looking at Jewish customers.”

The brothers spend their summers driving the six Bazel ice cream trucks around New York, splitting their time between Brooklyn and the Catskills. They offer everything from ice cream and slushies to popcorn and cotton candy, and often cater camp gatherings and birthday parties. And, of course, to the ice cream hungry Lubavitchers in Brooklyn.

“Everyone’s favorite is the soft serve, but we get a lot of people ordering the slushies, because they are pareve,” Bazel said, referring to the plastic jugs of rainbow-colored slushie syrup lining the floor of the truck.

Mehadrin Dairy, a strictly kosher company in Brooklyn that makes both dairy and pareve ice cream, currently supplies Bazel and his family. While the men offer a plethora of toppings, they stick to the classic flavors of the ice cream itself, selling only chocolate and vanilla.

No self-respecting ice cream truck travels without a catchy jingle and so, as Bazel rounds each bend, he presses “play” on his iPod and a hearty male voice booms from the truck’s speakers: “Come and make a bracha [blessing], a bracha, a bracha… today. We’ve got ice cream and ices, and boy you’ll love our prices…. The kosher ice cream truck is here!” As the words waft through the Brooklyn air, the verse is then repeated in Yiddish.

“That song! It means the kosher ice cream truck is here,” said Miles Walser, a non-Lubavitch resident of Crown Heights. Though he has never tasted the kosher fare, it took him only a week of living in the neighborhood to learn the entire song by heart.

Catering to the ultra-Orthodox comes with its own challenges. Bazel bemoaned his Hasidic clients in Williamsburg, who constantly question the truck’s kosher status. When he is in the neighborhood, he speaks in the broken Yiddish that he’s picked up over the years.

As the truck stops on the corner of a rundown residential block on Crown Street, Yisroel Blank, his young son, Yosef, and the two children to whom he teaches Talmud come up to the window, asking for three slushies.

As the strawberry slushie gets placed in his son’s hand, Blank whispers, “I want to hear a bracha first!”