A Woman’s Spirituality, Measured by Hosiery 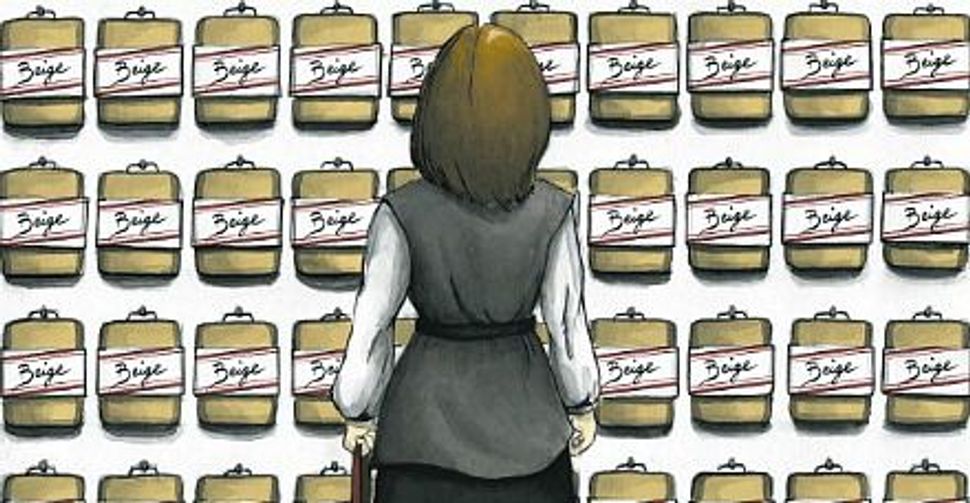 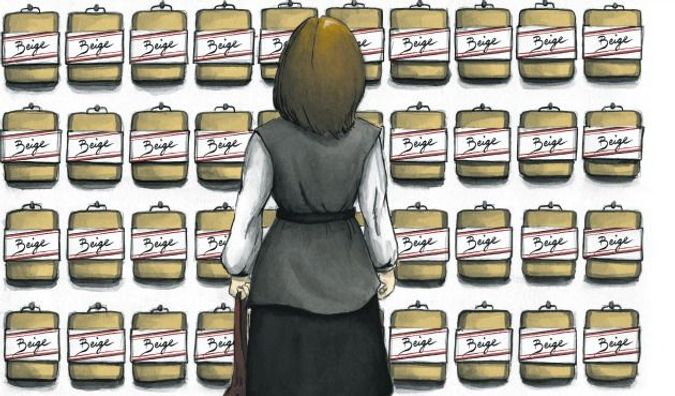 I was certainly wearing pantyhose. It was just that they were wet, and this is what caused the confusion. To the young Hasid passing the yard where I sat, the damp Lycra, transparent in the glinting sun, looked like my nude legs sprawled over the edge of the pop-up pool, bare as a careless whore.

It was a momentary mishap, a misunderstanding, cleared up in less than a day. After all, like every Hasidic woman in the ultra-Orthodox world, I had been wearing pantyhose since I was 6 years old, the age we stop wearing socks. How else would we be modest? How else to ensure that no one saw our legs when we ran, jogged, skipped or walked?

This is the first in a Forward series by Judy Brown, author of ‘Hush.’ The essays will explore Hasidic life and her decision to leave the community.

I never thought about it: not in the warmth, not in the heat, not in the trapping humidity of the August sun. I saw gentiles strolling down the sidewalk, their toes wiggling in their flip-flops, and I didn’t care. I liked my pantyhose, never felt quite dressed without them pulled snugly around my waist.

There was a clear framework with boundaries well marked, but still, there was room to play. We tucked T-shirts beneath sleeveless tops, long skirts under perfect mini-dresses. It was really a matter of instinct, a feminine sixth sense well honed over years of practice: where to push, where to pull.

Then there were the things one did not touch: red nail polish, 3-inch C-shaped earrings, gladiator sandals on platforms. And of course, bare legs.

Legs are important. Legs hold up the rest of the body. Most precariously, legs have curves. It was the basics of modesty drilled deep into the neural hemispheres of our brains: Legs must be covered at all times, preferably in opaque beige.

Sheer beige was fine, too. If the temptation got too great, perhaps off-black. But black, navy, brown or any other color was forbidden. Dark pantyhose had once been in style in the world out there — no one could recall the decade or place — and hence, forbidden in here.

High school teachers warned of the spiritual denigration. Shidduchim depended on it. The girl who wore black tights was quickly relegated to class B, the “modern” type. A fine girl, perhaps. Excellent character traits. But with such legwear, it was explained, many an excellent marriage prospect stopped dead in its tracks.

From age 14 to 19, we pined. We wanted to look pretty, to match our dark Shabbos clothes with perfect black tights.

Ultimately, my burning desire for dark pantyhose overwhelmed my fear of God. I was 20 when I tentatively began wearing them, though only the off-est black. A year later, I bought plain black. Finally, triumphantly, I stood in front of my mirror, admiring my curvy legs in the darkest tights with pretty patterns of crisscrossing lines, $11 a pair.

I was, after all, already married, and if I wanted to deteriorate spiritually, that was my choice. I was by then sporting skirts that covered my knees by barely an inch, and shirts that were too fitted. There were raging explosions between me and my then husband over the safety pin that closed my shirt right under the collar bone when it was supposed to be on top. Which is perhaps what made it easier to believe it when the young man passing by the yard declared that he had seen me with bare legs. Like a careless whore.

Let me explain. It was Tuesday, mid-August, a day the sun wrapped its heat rays tightly around New York. It was 3 p.m., and like every suffocating day that month, I filled up the baby pool for my children in the yard, settled on a plastic chair with cherry ices and dunked my legs in the pool, right where the water spurted from the hose.

It was then that the Hasid passed. It was then that he saw me — beige pantyhose transparent, legs seemingly bare — and, looking quickly away, hurried to tell the rav. I had not seen him at all. I did not know of the bewildered chaos going on in his mind until later that night, when my husband came home and stared at me quizzically.

The rav had called, he said. Could it be true? That I had sat outside with no pantyhose at all?

“It’s true. The rav told me. He said he wouldn’t tell me who it was, so I shouldn’t ask, but a man had certainly seen you outside with nothing on.”

My mind sped over the day’s details. There was breakfast, then prayers, laundry, then shopping for Shaindy’s socks. The children arrived home. I had taken them outside. There I had filled up the pool and sat by the edge, with my feet in the water.

But I had certainly been wearing pantyhose. I had opened a new pair that morning: Berkshire brand, city beige, very sheer, medium, 100 to 135 pounds. Pantyhose, the realization then struck me, that had been very wet. Finally, I understood.

There was a hint of skepticism, but within a day, everyone had calmed down. It was agreed. Exposing my bare calves and ankles? Even I would never do that.

It is the way things are in the confined ZIP codes of Brooklyn, where an ancient way of life still thrives, along with its dress codes, language and traditions.

Is this good? Is this bad? I do not know. It is a warm world that is suffocating yet reassuring. And though these incidents are unsettling, the cheerful upside to it all is the times I get to tell on someone else. Like two years ago, when I told the rav that my friend Rivky and her husband go to the movies.

It happened accidentally. I had come to the rav to ask for advice about a different subject entirely, but he had asked me about this and that, and while trying to remember, I said: “Oh, yes. That was right after Rivky and her husband came back from the movie.”

He stared at me in shock. “Rivky? And her husband?”

We don’t go to the movies.

I immediately corrected myself. I told him it was a documentary. About stars. Or penguins. Or starlike penguins. It was hard to believe. The things they do in movies. I mean documentaries.

This is not a double life. It is, rather, a coping mechanism. We, the Hasidish-ish, do not want to be secular. We just want to watch a particular movie. Then we want to go back.

The distance between the 16th century, in which we live, and the 21st, in which we don’t, is one 40-minute subway ride. It takes some practice, but you quickly learn to navigate the edges, seamlessly straddling the thick red line separating Here from There.

I went to see movies all the time. I went with my Modern Orthodox friend, Shira, and she found it impossible to comprehend. The tights, I mean, and the movies.

“If you watch movies, then why wear these thick pantyhose in 90 degree weather? If movies are okay, then not wearing pantyhose is okay, too.”

I disagreed. A movie was different. You watched for an hour, and then it was over. Pantyhose were so much more — a bold statement, a part of one’s identity.

Shira shook her head, exasperated. She said it was just insane, us living in a world that no longer existed.

I told her that we could disrespect each other’s way of life and still be friends. I said this when one day, while shopping at Macy’s, she convinced me to try on jeans. She grabbed a pair of Levi’s and firmly shoved me into the fitting room. She waved them over my head, saying she just had to see what I looked like in pants.

It was an arduous process, pushing my legs into two separate entities that hung from the same waistband. Shira helped. She pulled and she pushed, yanking up the jeans. She then stood proudly in front of me and announced that they were perfect. I winced.

I had never been so uncomfortable in my entire life. My legs were suffocating. They yearned for the flare and swirl of a skirt. Pants, I discovered as I tried to bend my knees, were impossible to sit down in. My thighs spread out like squashed gefilte fish.

The following Wednesday we went to Tribeca to see the movie “Sex and the City.” In Tribeca, people don’t wear pantyhose. I know because I saw them: mobs of extremely secular people shuffling in flip-flops, pretending to be comfortable. As I strode down the block toward Shira, stroking the soft ends of my custom wig, I could see her observing me, her eyes starting at my neck, moving past my fitted T-shirt and the matching belt, to my at-the-knee skirt, and then stopping at my legs. She grimaced. She pointed. She wiped the sweat off her forehead.

“The sun is complaining about the heat,” she said. “And you’re wearing pantyhose?”

I looked at her shiny toes wiggling out her sandals. I stroked my thigh protectively. I sniffed at her Upper West Side absurdity. I told her it was she who had it all wrong. My pantyhose protected my legs from spiritual degeneration and skin cancer. I had come to this foreign side of town to watch a movie with too much sex and impossibly fashionable clothing because I wanted to, and my pantyhose had nothing to do with it. I said many other proud things about our traditions, heritage and whatever talmudic passages I could remember, at which point she said: “Okay, okay. Let’s go watch the movie.”

It was a moment of truth. It was a profound coming-to-terms with being the sole pantyhose-wearer in all of Tribeca. And I was at peace with that. Because when the movie was finished, and what’s-her-name finally had sex with what’s-his-name in the walk-in shoe closet, I would ride the train back to There, over There, deep in the 16th century where I mostly lived, and where we all unanimously agreed that pantyhose were necessary and good. Just not wet.

Judy Brown wrote the novel “Hush” under the pseudonym Eishes Chayil. She is currently working on her second book.

A Woman’s Spirituality, Measured by Hosiery