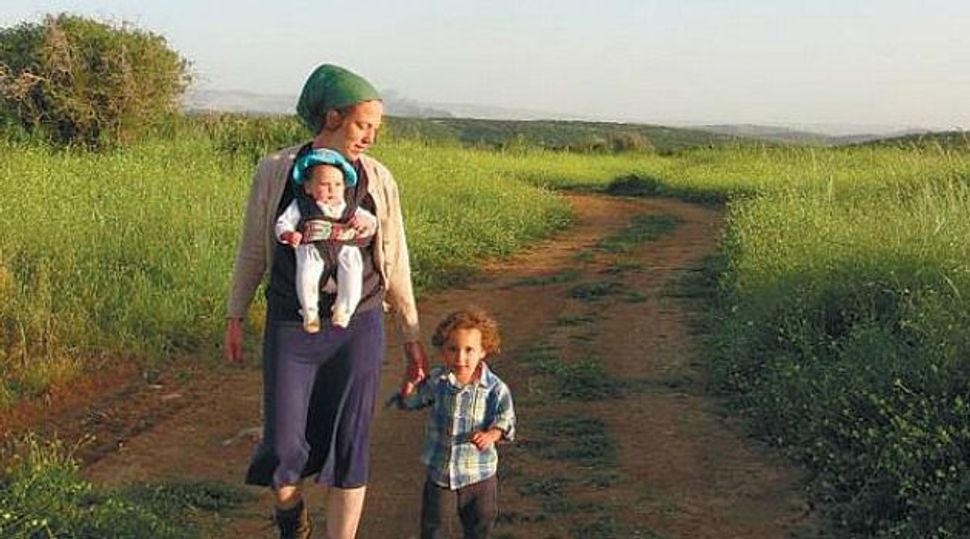 Ayala Pamela Weisfeld walks with her two children. Friends and strangers alike followed her struggle with cancer on Facebook ? and mourned her untimely death.

The tragic ordeal of Ayala Pamela Weisfeld – the 40-year-old immigrant mother of two from New Jersey who died this week in Jerusalem following a public five-week bout with cancer – unfolded on a Facebook page in real time and in riveting detail, with twists and turns that veered from hope to nail-biting angst to agony and, finally, consolation.

“Ayala’s situation has worsened rapidly,” Weisfeld’s British-born husband, Shmuel, posted Monday at 2:40 P.M., dashing the hopes of the more than 3,400 members who had swelled the group’s ranks, and many of whom had altered their daily routines to study, pray and perform religious rituals in the name of Pamela’s recovery. “The CT scan showed the cancer has spread everywhere and is beyond treatment. She is losing brain function and the doctors say she does not have long.”

What began as virtual effort by Pamela’s friends to ask for prayers for her recovery and to draft financial support for the family soon morphed into a clearinghouse for well-wishers and a community’s coordinated response to a catastrophic illness. The kind of chatter that is usually relegated to the virtual backrooms of subscriber-based community e-mail lists was at once unfolding on a Facebook page for all to see.

As friends posted pictures of Pamela – a native of Yorktown Heights, New York, who was suddenly diagnosed in mid-July with an advanced stage of brain, liver, breast and bone cancer – others meanwhile committed to reciting chapters of Psalms, as is the tradition when praying for the ill. Some even posted pictures of braided challah breads they baked, an act that incorporates a ritual of tithing that Jewish tradition deems as a favorable time for the utterance of personal requests and prayers. Those who could not maintain their commitment to reciting Psalms sought replacements.

“I am finding it really hard to keep up with my share of Tehillim [Psalms], as I have a lot going on these days,” Cigal Gabay posted. “I am wondering if there’s anyone who would be willing to take over for me. I read [chapters 100, 101 and 102]. If anyone is able to take over for me as of tomorrow, I would greatly appreciate it.”

Word of Weisfeld’s death was posted by her husband, a Jerusalem broadcaster from the United Kingdom, Monday evening, two hours after his earlier post about his wife’s deteriorating condition. “Please say tehillim for the rising of the soul Ayala bat Leah who passed away this afternoon with her family around her,” he wrote at 6:48 P.M., citing his wife’s Hebrew name and the name of her mother. “She will be deeply, deeply missed.”

Funeral services for Weisfeld – a six-year resident of Jerusalem who worked in social media and Internet marketing – were held Tuesday on Jerusalem’s Mount of Olives. The Facebook page, which has been flooded with condolence messages, has become, essentially, a virtual shiva for this beloved Jerusalem mother and friend.

“It is remarkable how everyone came together,” said Rabbi Yehoshua Looks, a family friend, who first blogged for Haaretz about the “Refuah Shelema for Pamela Weisfeld” Facebook page when she was diagnosed. “It tells you something about the power of social media to bring a world into a tragedy.”