Tribute to Disappearing Jews of Friesland 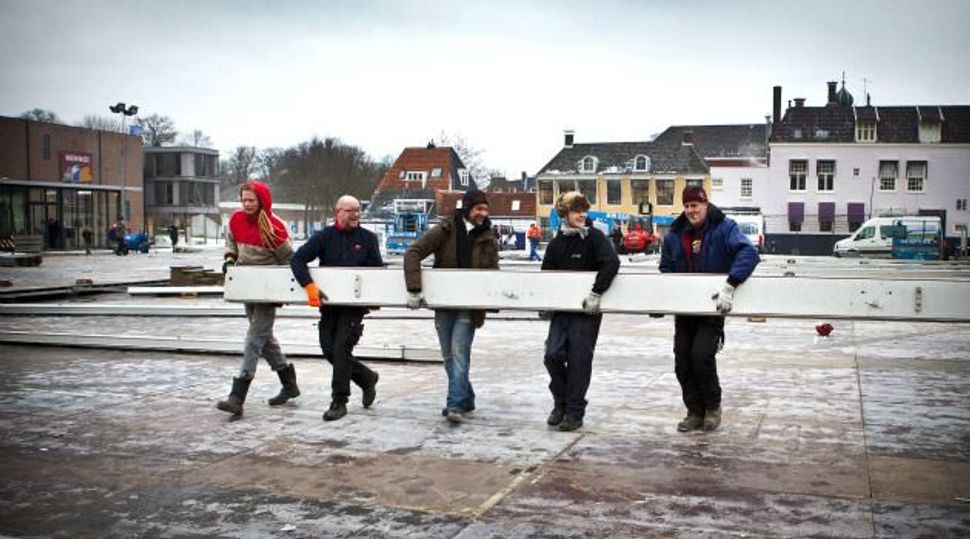 Few Jews: The provincial Dutch capital of Leeuwarden once had a thriving Jewish community. No more. Image by getty images

When Jacob Nathan de Leeuwe found himself returning nearly two decades ago from his home in a suburb of Amsterdam to this isolated idyll he calls “the end of the world,” it undoubtedly was the pull of his roots.

De Leeuwe’s family had lived in this semi-autonomous region in the northern Netherlands known as Friesland for 200 years, and a unique Jewish community with its own customs, traditions and even language had thrived here. His mother was raised in Leeuwarden, Friesland’s capital, among 1,500 Jews concentrated in a Jewish quarter that had several kosher butcher shops, a kosher cafe and a Jewish education network going from kindergarten to high school.

But then the Nazis came and the Friesland community was wiped out. Today only 50 or so Jews remain in Leeuwarden among the approximately 650,000 people living in the region.

Five years ago, De Leeuwe began focusing on another aspect of his roots, the Talmud, which he started to painstakingly translate into Dutch. This summer he reached the first milestone in his work, completing the translation of the first tractate, Brachot, in nine annotated volumes.

De Leeuwe says that though the Jewish population here is minuscule, Friesland is a fitting place for such work.

Writing here, he says, is a form of “tikkun,” repair: He would produce the world’s first annotated Dutch translation of the Talmud in the place that the Nazis had tried to destroy his family and his people.

In the introduction to his recently completed translation, de Leeuwe mentions the “enemies” of the Jewish people but refuses to use the word Nazis. “I wasn’t going to give the Nazis the honor of being mentioned in Talmudic text,” he tells JTA.

“A thousand years from now,” he says, “this book will still say that, despite how the Germans tried to wipe out the Jewish people, we prevailed.”

The first two volumes of his translation took the most work, says De Leeuwe, a doctor and former cantor who used to teach Talmud classes while living elsewhere in the Netherlands. “I’m able to work much faster now,” he says. He hopes to finish two additional tractates by Passover.

Judaica collectors, libraries and others have bought about 300 copies of each volume, according to de Leeuwe.

Before the war, Leeuwarden’s Jewish community was the largest in Friesland – a province with its own flag and language, Frisian. It is the Netherlands’ only official language besides Dutch. Despite being the kingdom’s third largest province, Friesland also is one of the country’s least populated regions.

The community had a chief rabbi independent of the one in Amsterdam 70 miles away. Frisian Jews recite special prayers at funerals beyond the typical ones. De Leeuwe, an energetic man with a keen sense of humor, offers a sad laugh as he recalls his grandmother’s unique traditional headwear – a special Frisian bonnet worn only by Frisian Jews.

Leeuwarden was the last Dutch Jewish community where sermons were delivered in Yiddish – as late as 1886, says Bart Wallet, a historian from the University of Amsterdam and an expert on Dutch Jewish history. Chief Rabbi Benedictus-Baruch Bendit Dusnus resisted switching to any other language. That change came only after he died, prompting a few older men in the synagogue to leave in protest of the incorporation of “a Christian language” in synagogue.

The Yiddish spoken here was different, too. The Frisian version lives today only in a glossary that Hartog Beem, a Jewish teacher, wrote after World War II.

The Holocaust hit the area’s Jews particularly hard, Wallet says. There were few hiding places in the area, and the German occupation forces started deportations not long after their occupation began in May 1940.

Unlike in other parts of the Netherlands, Friesland barely saw the return of Jewish life. Among the 10 prewar Jewish communities, only Leeuwarden saw some Jews return – and they were few. Today, only a fraction of the original population remains.

Still, the community is diverse, with Orthodox, Reform and a so-called Progressive congregation. De Leeuwe belongs to a very small group of observant Jews in Friesland.

Some 200 Frisian Jews survived the Holocaust, de Leeuwe says. After the war, most left for Israel. De Leeuwe says he wants to leave, too; his son, Haim, already lives in Ashdod, Israel.

Soon, de Leeuwe will reach the retirement age of 65. Years ago, he said, he grew tired of the isolation of Leeuwarden. He and his Israeli wife now divide their time between their home in Friesland and a second house in Amstelveen, an Amsterdam suburb.

“Being in constant contact with students and rabbis is great,” he says of spending more time in Amstelveen. It keeps you sharp; you can consult many knowledgeable people. I have had some difficult years in Leeuwarden.”

Gathering a minyan is one of the challenges, de Leeuwe says. Half of Leeuwarden’s 52 Jews are older than 60.

“The community is dying out,” he says.

The building that used to house the Leeuwarden Orthodox synagogue is now a dance school. The congregation uses a much smaller building nearby.

Another of Friesland’s 10 prewar Jewish communities was located in the sleepy, windswept harbor town of Harlingen. Earlier this month, the municipality there opened a modest exhibition telling the community’s story.

Two chilling photos stand in the entrance to the exhibition. Both show Abraham Pais, a Harlingen Jewish greengrocer in his late 70s. One is a prewar shot of him wearing a suit in front of the family business. In the other he is holding a wicker basket, bags under his eyes and wearing a yellow star on a worn-out jacket. He and his sister, Esther, were murdered in Auschwitz in November 1942.

Harlingen also has installed memorial cobblestones made of brass in front of every Jewish household deported in 1942. Only 45 Jews were left in the town by then. Seventy years earlier, in 1872, the Harlingen Jewish community numbered 369.

“It feels like a tragedy, the sense of loss of something unique that will never return,” de Leeuwe says.

Tribute to Disappearing Jews of Friesland